When the invite pinged into my inbox a couple of months back, I’d like to think I was one of the first people to reply with a “yes”. What was that email I hear you cry? Well it was an invite to the Vuelio (formerly Cision) Blog Awards! I like a nice evening out with fellow bloggers. Whilst all the other blog award ceremonies I’ve been to have been parenting awards, and so have been about 99% ladies, since Vuelio were covering all areas of blogging rather than just parenting, I thought I would have more of a chance of some fellow male company.

The awards were on Friday night and since they were “black tie but suit is okay”, I headed up straight from work, warning the multitude that I was coming:

Off to #vuelioblogawards say hello if you spot me (nb headphones will be off, expression will be slightly less gormless).

There’s nothing like fair warning! And to be fair, a good number of people did say hello when they saw me there, which was great and really what blogging is all about in my humble opinion. 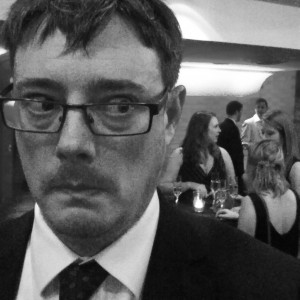 Vuelio had picked a great venue for the awards, the Brewery just outside the Barbican in central London. It’s a venue I’ve sat in before to be disappointed at not winning an award but since I was only along for the fun this time, I didn’t mind too much at returning to the location of my defeat*.

As you can see, the ladies had taken the opportunity to dress up and since there were fashion and beauty categories, there was no shortage of the fashionable or the beautiful in addition to me. The champagne reception was very well organised, and I managed to corner Jo, who ended up being the main celeb of the night, what with her winning the Best Parent Blog category and the overall Best UK Blogger. I’ve always had a great respect for Jo; she’s smart, honest without having to make a song and dance out of it, and knows her stuff. Out of all the people I know that call themselves pro bloggers, she doesn’t but probably fits whatever criteria you could draw up better than anyone else. We were herded through to the dining hall/awards area with great efficiency.

I’m not sure how many people were there but given that the tables sat ten each and went up to the mid 50’s, I’d guess there were around 500. There were a few empty seats (our table was probably the worst, there were only 5 on it- perhaps my reputation preceded me), but that’s always going to be the case when attendance is free. I always think it’s a shame when you say yes to something and then don’t bother to turn up on the night. 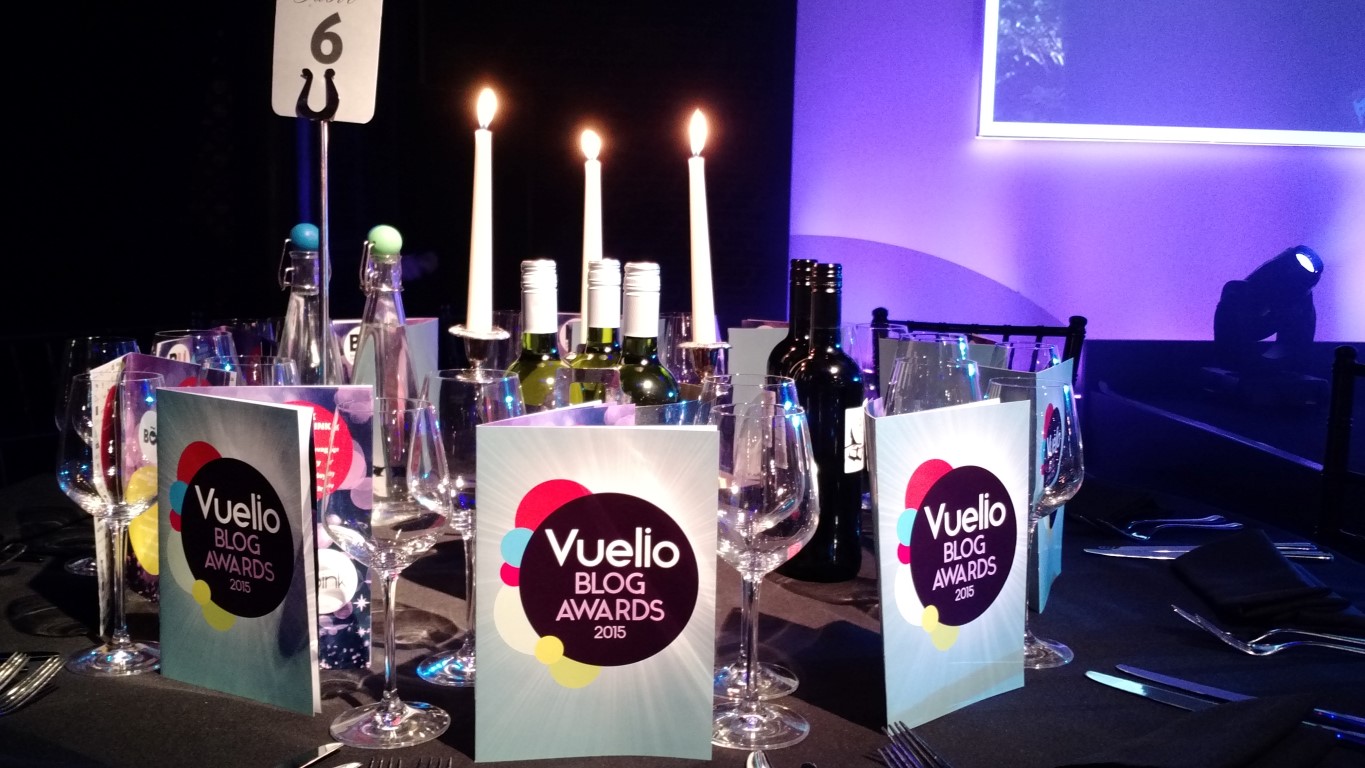 Still, table setting and food was ace, especially as I got to have 3 starters! I was sat with a great bunch of people, a fashion blogger, a music blogger and a health blogger who happened to have studied sociology at my old university just before I joined the department. Small world eh? The awards were presented by Mark Dolan, a comedian/TV presenter chap who managed a few amusing gags about technology; never something easy in a room full of people who’s hobby revolves around using technology. One of these revolved around some website called cockinmymouth.net, and I was pleased to let him know it’s still available for purchase should he want to set it up.

I found out it’s much better watching awards when you’re not up for one yourself (see footnote again), and so I had a great old time. 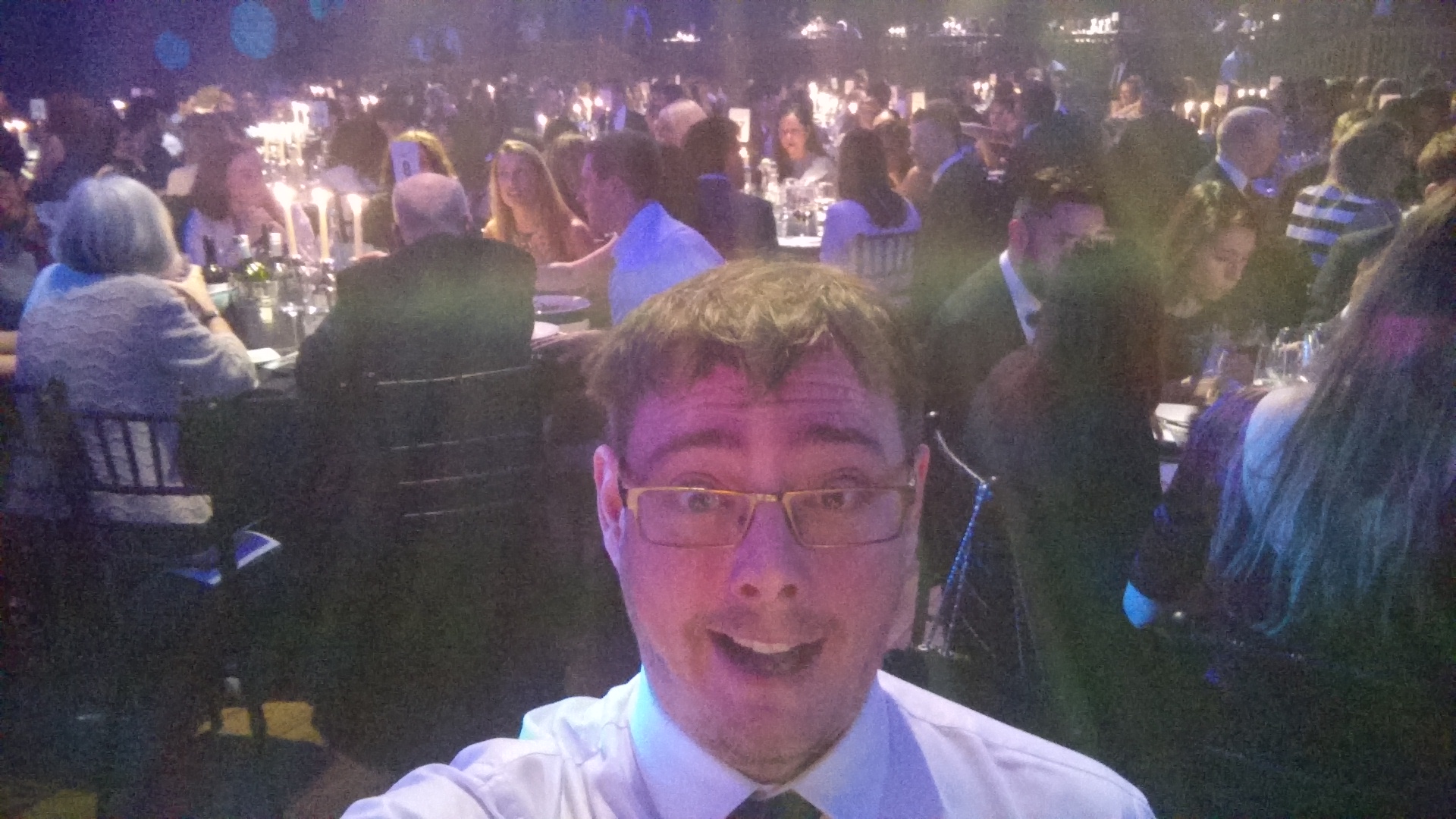 So well done to the winners, particularly Jo and the Curry Guy, sorry to Phil from Live for Films that I didn’t get to catch up properly and find out what was behind his Alan Moore tribute beard but most importantly thank you to Vuelio for the great night out!

*Best dad blog at Britmums. I lost. I’ve also lost at the MADs twice, and the Gurgle Magazine Parenting Awards too. Still, I once won a Nissan LEAF in a blogger competition, so I can’t really complain.