This is the level pack for LEGO Dimensions that we’ve all been waiting for; Doctor Who! The boy is a huge Doctor Who fan, as am I, and we’re both big LEGO Dimension fans as well.

So when WB sent us a set for review, we couldn’t wait to crack it open: 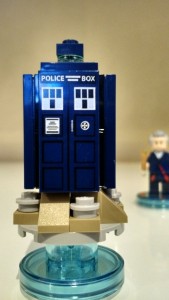 Peter Capaldi is great and all that but we’re now cracking on with the level because once it’s completed, we’ll be able to unlock all the other Doctors, right back to William Hartnell (including the movie Doctor and the War Doctor!).

We may have spent more time than we should have making Bart Simpson vibrate by zapping him with the sonic screwdriver, but that’s just how we roll in our house.

WB have done their best to make the TARDIS and K9 interesting to build- after all the TARDIS is basically just a box. K9 is great fun though, especially when you sit on him in game and whiz around on him. The K9 sound effects are very true to old ‘Who as well, it sounds like he’s built out of an old electric wheelchair.

The TARDIS itself has two way of operation- you can either drive it like a normal vehicle and it bounces around like it does in new ‘Who or you can get into it properly at you’ll find the console where you can use various functions that are progress unlocked.

Weighing in at around £30, this level pack isn’t cheap but for Doctor Who fans, it’s essential.