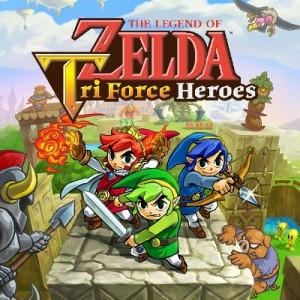 While the kids are huge Nintendo fans, they’ve never really experienced a Zelda game before. I played Legend of Zelda: A link to the past to death on the SNES back in the early 90’s but I was twice as old as the boy (16 against his 8), which makes role playing games much easier to play, in terms of concentration and such.

Still, Tri Force Heroes has landed on the 3DS and we were keen to give it a go with our Nintendo Ambassador hats on, me more so than the kids! The Legend of Zelda: Tri Force Heroes is a little different than other Zelda games, it’s fundamentally a multiplayer game (three people, if the Tri in Tri Force Heroes hadn’t tipped you off). You can play multiplayer locally or on line. Generally on line in Nintendo is a lot safer than other systems- there’s no voice chat or anything but if you end up playing with two complete strangers like we did on more than one occasion, it can be a little frustrating as the puzzles can be a bit involved .  Local multiplayer looks to be a much better option, we just need a few more friends to grab the game. If you can’t find anyone to play with, you can play on your own using what the game calls “Doppels”- these are two other characters that you control as well. People of my generation might remember Head over Heels on the Spectrum- it’s a bit like that as the CPU doesn’t control the two Doppels, you do, switching between.

Talking of games it reminds me of, look in the trailer at the colours the characters are. Remind you a bit of Gauntlet? One more character on screen and we could have proper Gauntlet style action!

We found that with the kids playing, using Doppels was probably the best way to play in leui of having actual friends for local multiplayer. Online just didn’t work as well with younger kids. A lot of the puzzles involve team work- for example you might have a gap to cross and the only way to get the elves across is to use another elf to throw them across but how do you get the final one across? Don’t let the graphics fool you, it might look cutesy but it’s tricky in places.

Whilst it’s not a typical Zelda adventure, we did enjoy Tri Force Heroes but with some caveats; like (m)any multiplayer game, it lives or dies with the quality of the people you play with. I’m a strong believer in age appropriate games for kids but if your little darlings mates are all playing Call of Duty because their parents are cretins, your child might not get as much out of this as they could. It’s definitely worth a punt if you know some friends are planning to get it though.