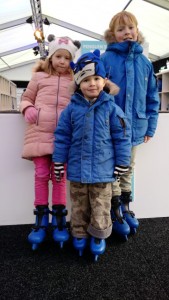 If someone had told me I would drive to an out of town shopping centre and happily spend about 6 hours there ice skating, eating street food, going on rides and shopping, I’d have told them exactly which part of cloud cuckoo land they were living in, right down to the street name. Still, it’s nice to be proved so utterly wrong and I genuinely can’t remember having a nicer Saturday in a long time. Big thanks to the ice rinks PR team for inviting us down for a free session on their ice rink!

Just past Wembley Stadium, and a stones throw from my usual North London haunt of IKEA, there is a fairly new outlet centre, with loads of stores like Clarkes, GAP, every single running and outdoors retailer you could think of, and some nice restaurants. There are a couple of huge multi-storey car parks, and you get free parking if you spend over £30. Even with the additional 15% off voucher that we got for going skating, my shoes at Clarkes came to just over that, so parking was free- hurrah!

The ice rink is set up next to a great kids play park. Since there were road works on the North Circular, we set off in plenty of time and obviously whizzed straight through them without an issue. Fortunately the kids spent the half an hour that we were early on the swings, slides and climbing frames, which saved us sitting around and kept them all warm. 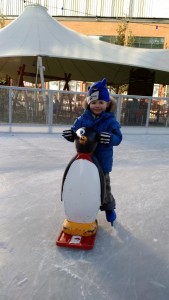 The change facilities themselves are right adjacent to the rink, in a temporary building that’s obviously well put together since the 40+ mile per hour winds didn’t seem to daunt it particularly. It was a short clump from the changing room to the rink itself, where we were lucky enough to have a half hour lesson with one of the instructors from Dancing On Ice. Fifi took to it like a natural, as we all expected her to, Ned was happy with his penguin and after a bit of clomping about, the boy joined him on another penguin. I don’t think I’ve seen anything funnier than all four of us lined up (me, wifey, the boy and Fifi) listening intently to the instructor, only for Ned to glide past in front of us, doing his own thing and doing it well.

The rink has it’s own website, is open daily until 3rd January (closed Christmas Day) and tickets start at £7 for adults and £5 for kids, which includes skate hire and 45 minutes on the ice. Penguins are a fiver, and lockers cost a non refundable £2. Afterwards you can gorge on some lovely street food- the pizza was great, the meatballs even better, but we were all jealous of the boys burger- before you hit the shops.

We had a great day out, which really surprised me but it just goes to show you need to have an open mind when it comes to new stuff- lesson learnt!