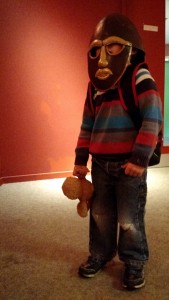 As the weather promised to be good yesterday, we decided on one last fling of the outdoor day trip for the autumn and packed our lunches for a trip to West Stow Anglo Saxon village, on the outskirts of Bury St Edmunds.

It’s a place I’d been to before with the lady wife before she was the lady wife. In fact the details on the photos I had from the previous trip suggested we went in January 2003, which is a long time ago. I was probably wearing one of the t-shirts I owned back then last week- somethings never change!

This coming half term the boy is doing Anglo Saxons at school (rather than running chronologically though the history curriculum, his school are doing it in an arbitrary way that makes little or no sense to me but hey, what do I know, I only did some degree level history), so we thought a nice day out would make it come to life in the way that sitting in a class room wouldn’t. 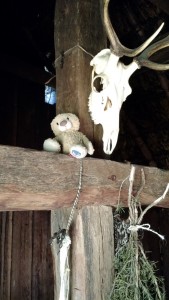 Obviously we had to drag him kicking and screaming in to the car, after forcing him to put some long trousers on. That’s how he rolls- intractable to begin with, until he forgets himself and actually starts enjoying what we’re doing. I’ve often suggested to him he skips the tantrum and moves straight on to the fun, because he inevitably ends up there but so far he’s rejected my suggestions.

West Stow is built on the actual site of an early Anglo Saxon settlement, in the case of some of the buildings, literally on the same site, down to the same post holes being used for the timber. It has a good little museum attached to it, as well as all the buildings, and a family ticket is a very reasonable £15. Parking is an addition £2 mind you but it’s difficult to feel hard done by as you’re more than likely to have an interesting day out if this sort of thing is your sort of thing. The buildings themselves could do with a little more interpretation- we got chatting to one of the chaps who works there who went into some fascinating detail about sap wood versus heartwood and how the ridge of the thatch was done with turf on one of the buildings, but there was no actual signage up and if we hadn’t spoken to him, we’d have been none the wiser.

All in all though, a great day out- right at our limit for daily travel (about an hour and a half in each direction) but I’m glad we made the effort.