In the ‘Cool household we have something of a dichotomy. I love Christmas but I also hate Christmas starting to early. It’s only the end of the first week of December but already one local retailer has had the Christmas music on for a full six weeks. Madness! I’ve been sitting at my desk humming Ding Dong Merrily on High for days now.

Still, it’s December, it’s wet, miserable and I’m really busy at work, so that means that Christmas is just round the corner.

We have certain routines that form our preparation for Christmas, some of them cost a few bob and some of them are free. I personally always think that the River Cottage Christmas Feast (usually lurking somewhere on More4 nowadays) is the perfect start to the festive season. Hugh stuffs half a dozen birds in to each other, goes wassailing and typically has the sort of TV Christmas that only the rich and privileged can manage but the rest of us can lust after.

We also go to the local garden centres Christmas Grotto, and every other year one of our local churches has a Christmas tree festival. It’s all great and all free! 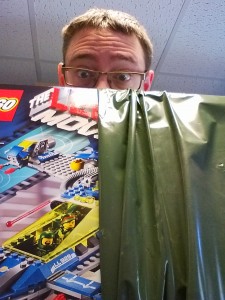 Still, Christmas can be an expensive affair, even if you do lots of free stuff. We have a few tricks up our sleeves when it comes to Christmas though, first of which is buying potential presents throughout the year. For example I picked up a LEGO Movie Benny’s Spaceship set in the January sales for £54 and a LEGO Star Wars AT-AT set for £50. The Spaceship is currently £76 on Amazon and the AT-AT a rather astonishing £124!

We don’t just reserve it to toys though (thankfully the boy has actually asked for Benny’s Spaceship for Christmas, but the secondary market on some of these LEGO sets is mad, so you’re unlikely to lose out anyway), as we also grab any deals on crackers or cards in the new year too.

If you’d like to read some more useful money saving tips check out the TSB  Christmas Guide.

Ever year I try to set up a shared spreadsheet on Google Docs so we can keep track of what’s been bought for who but inevitably it always gets discarded in favour of a note book. It’s only early December but we’re already nearly there when it comes to wrapping the pressies although I have to admit that’s more to do with wifey than me!