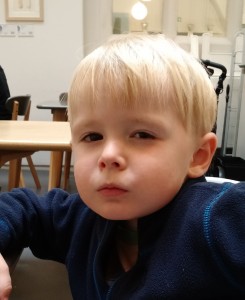 It’s not unusual that our mornings start with some rather odd demands from Ned. Since he’s three, you can tell his thought process in it’s entirety as he’s not really developed a proper internal monologue quite yet. His normal conversation goes like this:

Can I have the TV on?

Can I have some sweets?

Can I have my breakfast?

That in a nutshell is his order of importance. Still, this morning he excelled himself, possibly because the television was already on.

Can I have a pie?

A pie? Not for breakfast, no. We don’t have any pies anyway.

There’s a box of pies downstairs. I’ll put one in a bowl and have it.

I’ll say okay but then put one in a bowl anyway and take it in to the sitting room and eat it, ha ha!

You can’t, there aren’t any left.

Who ate all the pies?

At this point I missed the golden opportunity to teach him the “who ate all the pies” football chant and I’m still kicking myself!