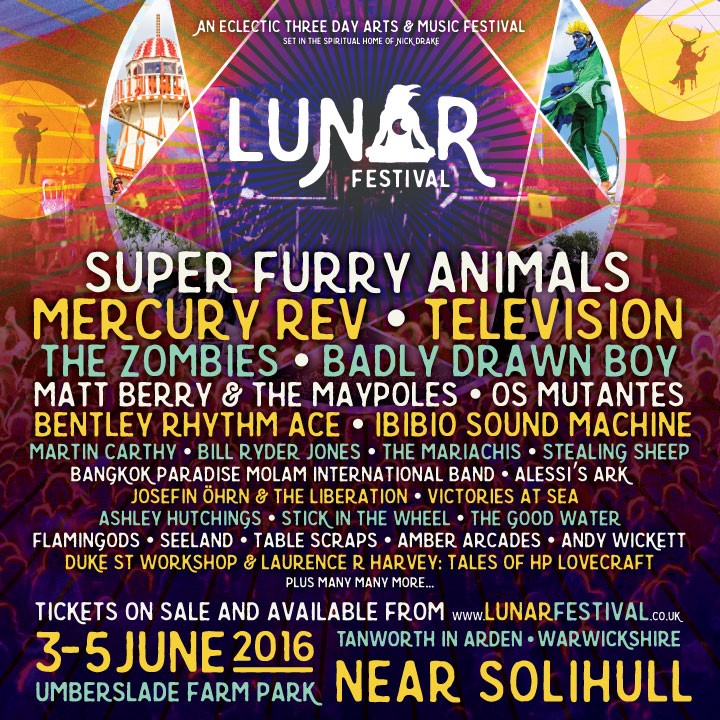 In what might by some be considered a festival round up, I’ve also had details about the Lunar Festival in Warwickshire through. There are loads of big festivals out there that people drag kids to for a weekend of misery amongst 100,000 other people, all of whom seem to have a hidden agenda to foul the portaloos as much as possible. We steer well clear of those though, having done the V Festival before kids and been sat approximately half a mile from the main stage, and having taken the kids to Bestival and sat about half a mile from the main stage while Blondie played, we’re keener to go to smaller festivals where you can actually see the band, you know, in real life, not on a giant screen.

Lunar has the local legends band (to us in St Albans anyway) The Zombies but I also notice that Matt Berry is playing, he’s bonkers, and the Super Furry Animals. Looks good!

A few words from the press release:

This summer Lunar Festival returns for its third year to the enchanting rural setting of Tanworth in Arden, resting place of Nick Drake, and now home to an established magical odyssey which likes to do things just a little bit differently.

Following on from 2015’s breakthrough year, this June’s Lunar is maturing into a wondrous experience across one weekend of magic, set in a rural idyll close to the beating heart of the Midlands yet a world away from the hustle and bustle of reality; inspiring, edifying and a little bit different, Lunar is a refreshing vision of what a festival should be like.

Tickets are available now, and under 12’s are only a fiver.