Our littlest might be just 4 but he definitely knows what he likes and for the last year or so that has involved a Thomas the Tank Engine story at bed time. His sister has got so fed up with them that she leaves the room for “Thomas time”.

Last night’s story was about the Fat Controller, Sir Topham Hat (see what they did there? He wears a top hat most of the time so they’ve given him a funny name based around it). As far as I’m aware it’s the only Thomas the Tank Engine book we have where he isn’t always wearing his hat.

Just as well really as the de-hatted Fat Controller looks rather like a certain master criminal from Netflix’s rather ace Daredevil: 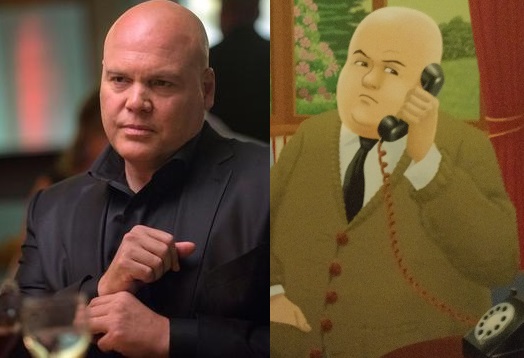 Once you see the similarity, it’s difficult to unsee it and you begin to see sinister undertones in the Fat Controllers behaviour. Like Wilson Fisk, he simply wants everything to run properly, and he’s not beyond threatening his underlings (the engines) in order to get his own way. The Fat Controllers mission is a perfectly running railway, and he’s not afraid of who he hurts to get his own way. He is a man with a greater purpose.

It’s not a stretch to look at pages from the books and come up with your own words either:

“What’s that you say Wesley? The masked man has taken out the heroin factory? No you were right to interrupt my breakfast with Vanessa” #daredevil