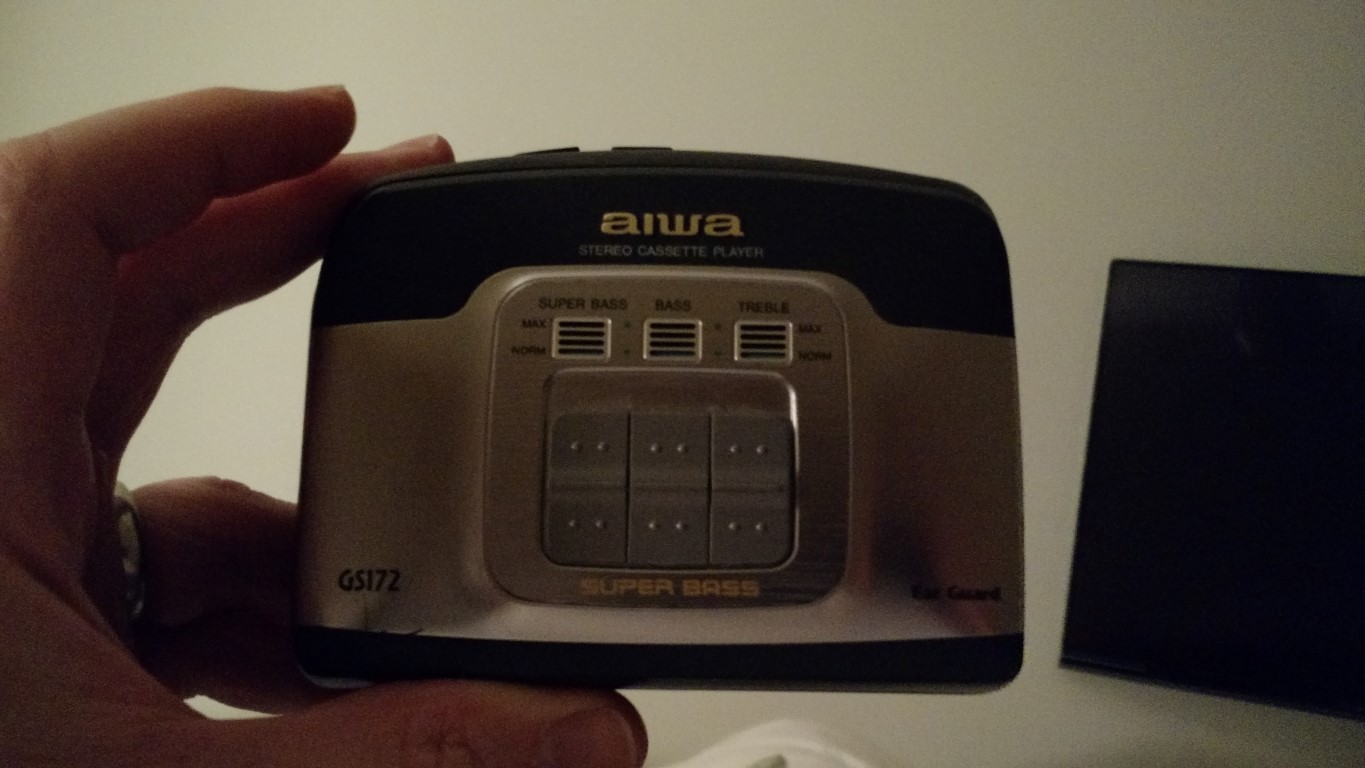 Like many grown up children, I still consider my parents house sort of free storage for “stuff” I want but don’t necessarily have the space to store or the inclination to use currently. I do however live in constant fear of my stuff being lethally disposed of without so much as a by your leave. This is mostly as a result of all of my Action Force sets and figures mysteriously disappearing a few years ago; one of the few things of genuine value to me that I hadn’t previously rescued. Every time I pop over there now, I have a rummage and take some things home with me.

I popped over with a brace of the kids on Saturday, the other one still at home for reasons I’ve already written about, and while they distracted my mum and dad, I went for my usual rummage. This time I turned up pay dirt- a big box of my old comics and magazines, including a ton of Doctor Who Monthly’s I picked up at a school fete, and my personal stereo from the mid 90’s.

Ladies and gentlemen, I give you the Aiwa GS172, still selling for £20 second hand on eBay to this very day! Unlike most of the portable electronics from my youth, I’d had the foresight to remove the batteries, and there was even a tape in there- a C90 labelled as “Various Rock II”. Of “Various Rock I”, there was no sign but I still remember making the tapes, using my JVC micro system to dump my favourite tracks off CD on to tape for use in either my portable stereo or my Vauxhall Nova.

Although I had a CD player by 1994, I still occasionally bought albums on cassette, I distinctly remember buying Pink Floyd’s The Division Bell on cassette, and I also found my copy of Paradise Lost’s Draconian Times on tape too.

When we got back home and I’d packed the kids off to bed, I rummaged around in the odds and sods drawer until I pulled out a couple of AA batteries. Armed with those and my AKG headphones, I set out to see what I was listening to back in 1995.

The first half a dozen tracks sounded fairly familiar:

As I listened on, it became more and more obvious that I’ve added a scant few albums and songs to my favourites since I was actually at Lancaster University between ’93 and ’97. There are a few notable omissions from the side I’ve listened to; Closing My Eyes by Naked Blue and Oh Well by Billy Sheenan, both off the Peter Green tribute album Rattlesnake Guitar aren’t on it but then since that album wasn’t released until 97, it’s not surprising. I hadn’t really discovered Peter Gabriel’s work by that point, so Solsbury Hill isn’t on it, but by and large, there isn’t a huge vacuum of stuff that I still listen to today that isn’t on it.

Perhaps of more interest are the few tracks that I obviously liked at the time but don’t have on Spotify playlists today. Stuff like the Cult’s She Sells Sanctuary, Semi Sonic’s FNT, or anything by the Blue Oyster Cult.

It’s vaguely disquieting to think that I’m pretty much done. Although bands still churn out albums, without the benefit of tape where you have to listen to all the tracks, in order, unless you had one of those clever decks that could search for the end of songs, it’s increasingly unlikely I’ll listen to a whole album of new music. It might be that one or two stand out tracks will encourage me to listen to a new album, like Coldplay’s Viva La Vida did (and goodness, that’s 8 years old now) with Violet Hill and the title track, or like Pompeii and Things We Lost In the Fire for Bastille’s Bad Blood but by and large, the excitement of the album, and with it new music, has pretty much left me.

Part of the problem is length. When I started buying CDs, a lot of the albums were still short enough to fit on a 45 minute side of a C90 cassette. They had no fillers at all, but now, removed from the restraint of even the 74 minutes of CD, albums are often a self indulgent sprawling mess. I remember fondly having a ta[e with Dark Side of the Moon on one side and Wish You Were Here on the other. Two of the greatest albums of all time, on one cassette!

And in case you’re wondering, the blog post title is another Wildhearts song. This one however wasn’t on Various Rock II….