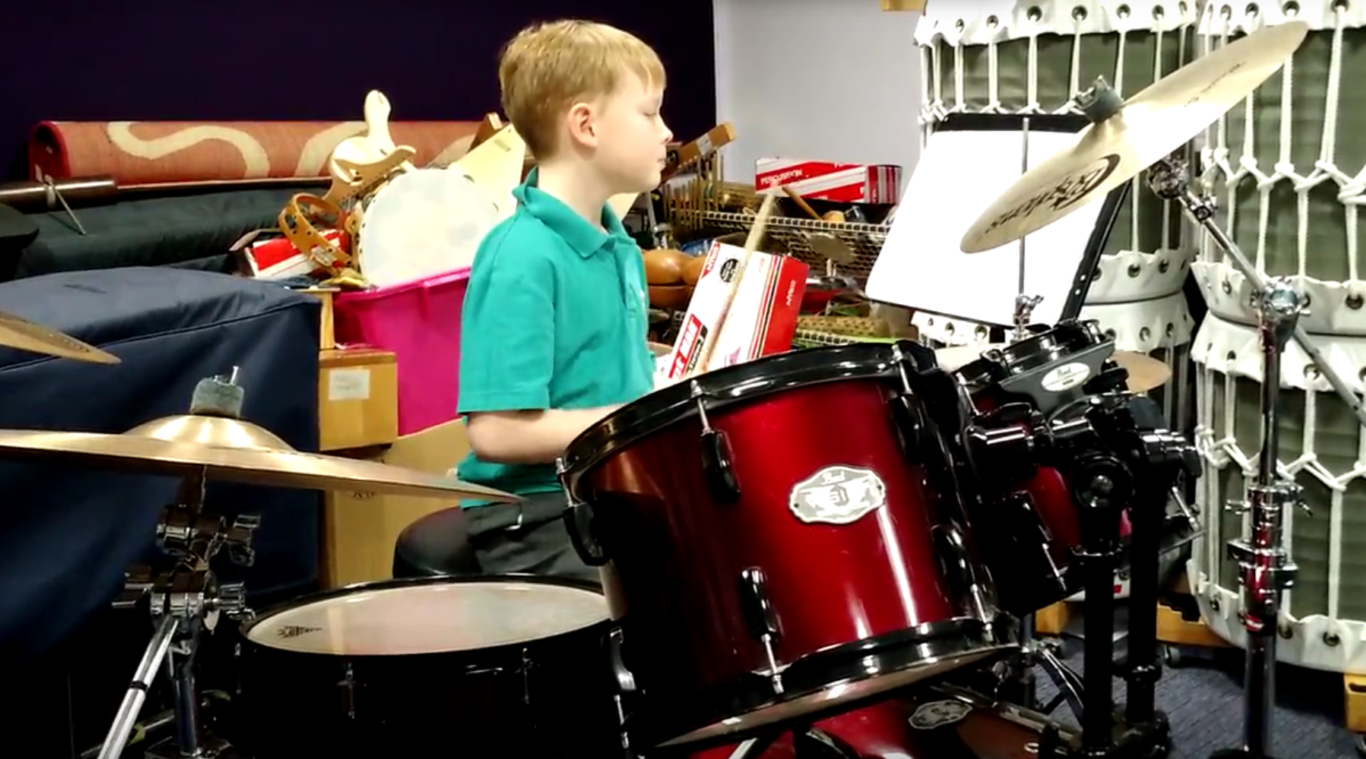 Our eldest has always been musical. He often used to sing songs that were on the radio almost perfectly after one of two listens. That was the first sign anyway, starting back when he was three or four. Even before he could form the words properly he used to hum the tunes pretty much perfectly.

At some point last year, learning the recorder at school wasn’t enough for the boy. He petitioned us incessantly to learn the drums. By incessantly petitioning, I really mean he drove us up the wall. Being sensible parents, before we committed ourselves to a purchase, we decided to get him some lessons. Three lessons later his teacher was raving about his ability. Since we went via a local music school, and we actually had to wait for a slot to come free, we were more inclined to believe it was genuine ability rather than a desire to part us with fees. They certainly didn’t need our money as there was and is a waiting list.

So we acquiesced and bought a drum kit. We got a deal where if you’re buying musical instruments for educational purposes you get nought percent finance over 10 months. So far so good but then the boy did what he is so good at, and things went down hill. For him, it’s all about acquiring stuff. He obsesses about getting things, be it books, video games, LEGO, toys or whatever. Once he has got the object of this obsession, he often rapidly loses interest in actually using it, and is just satisfied with having it.

Obviously this was a bit different than spending a tenner on a LEGO set or a book, we were paying £25 a month for ten months for his drum kit and I was damned if I was going to let it sit there in the way gathering dust.

On Monday evenings he went along to his drumming lesson and continued to blow his teachers expectations away. I had to tell Richard, his teacher, fairly early on that the boy was refusing to practice at all, and as a result Richard adjusted what he was teaching and his expectations. And when I say the boy refused to practice, I mean trying to make him practice would lead to him lying on the floor and sobbing for half an hour. He would rather cry for half an hour than spend five minutes practising his drums. And it’s the same to this day.

I can threaten him, try to bribe him, promise outlandish things, confiscate anything he holds dear but he will not practice 99 times out of a 100. Nothing I do will work.

I now have another problem though, Richard thinks I’m not being entirely truthful with him. Each half an hour lesson is roughly 15 minutes warm up, 5 minutes exercise and ten minutes practice on a piece of music. In the last year the lad has picked up the ability to read music, something I’ve never been able to do, and he’s flying. In the last three weeks, in 3 disjointed ten minute segments, he’s learnt an entire piece of music and he’s learnt it perfectly. In fact it’s not even the full 30 minutes as Richard called me in on Monday with 5 minutes to go and had the boy play me the piece. It was, note for note, pretty much perfect. At first his teacher point blank refused to believe that he hadn’t practised the piece extensively, let alone the fact he hadn’t even picked up his drum sticks for a week since the last lesson.

Eventually I managed to convince Richard that our lad hadn’t practised the piece at all. He was simply astonished and, bless him, managed to remonstrate with him, asking him what he might achieve if he actually applied himself.

I’ve done the dirty and promised the boy he can learn the guitar if he applies himself at his drumming and gets on to the grading system. I hope it costs me a guitar but I’m scared it won’t. It is so frustrating to know that he has an unbelievable natural gift that is probably going to go to waste for the want of application. The one ray of light I can see at the end of the tunnel is his extra maths lessons. Initially we had to drag him to them, now he’s actually writing letters to his maths tutor asking her to teach him specifics. He this willingness to learn leaches across to his music, we could all be in for a treat.

I want this for him, not vicariously for me. I think it would do him so much good to be super awesome at something in a way that others aren’t. Boys thrive on self confidence, and this could give him so much, it would be lovely to see.