We’ve been pondering for a while what to do about Ned’s room. Although we live in a four bed house, the fourth bedroom is a box room and while it’s true that he’s the smallest in literal terms at the moment, as he gets bigger the injustice of having a room either half or a third of the size of his siblings is going to start to prey on his mind. 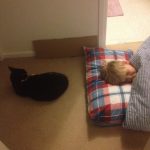 Consequently we’ve been looking at either extending or moving to get more room. Both are fraught with issues though, as anything involving property often is.

We spent a little over a month just trying to get local architects to even reply to our emails or phone calls and then when we had a meeting booked with one, the so and so didn’t even turn up. Still, we have some interesting potential ideas, if we ever get to speak to anyone who might be able to progress them.

One of our ideas is a two story side extension over our existing garage conversion (foundations permitting). Since the insulation would rob the rooms of a bit of width, we’ve thought about making them much airier by not having a loft space and opening them out, putting in addition roof windows from someone like the company VELUX, to get some extra light in there. I don’t think we’re ever going to be able to get a large square room but if we get an extra room that’s just under 2m wide, and has a large open expanse of space, it should suffice.

The added advantage of a roof window is we’d need blinds and we can let Ned pick what he wants, there is a fairly large Disney inspired collection of them that he could pick from.

We’ve always let the kids get involved in decorating there own rooms within reason- it’s where they’re going to spend a lot of time, so it sort of makes sense.

Of course the big challenge is finding someone to get us going on the project. The other option is to move but we’re not convinced that in terms of a home to live in, we could do better than we already have. We could definitely do better in terms of a mid or long term investment but I’m reluctant to do that at the expense of a good family space. The whole concept of a doer upper doesn’t really seem to exist any more either- when we bought our house 12 years ago it was very much a doer upper, it had rotting single glazed windows and the original 30 year old kitchen and bathrooms.

Now days that sort of house is bought and sold in what we’re called “bottom drawer” transactions. Agents have a list of buyers looking for a house in the area and when they get an enquiry for sale, the houses often don’t even make it on to the website, let alone Rightmove or Zoopla. It’s a crazy world.

I like our house and have to admit I like the roof windows in our friends recent extension. The idea of opening out a bedroom like that is something I’ve seen done on various Channel 4 property programmes, not least Grand Designs. Whilst we’re obviously not in the Grand Designs level of stuff, it’s still an idea I think we could make work for Ned…