Last weekend saw an international break in the football calendar that resulted in a mixture of elation and funk in our house. And also requests for the new England shirt with a Vardy 10 from the boy, who has ditched his long standing devotion to Wayne Rooney for Leicester’s James Vardy. Good lad, we’re no fans of Rooney in this house!

It’s now under ten weeks until the UEFA Euro 2016, and still a few days until the competition to be a player escort for England runs out (there is still time to enter- quick!), and it’s good in building the anticipation up for the tournament when we get to watch the lads have a run out, especially when they put in such a storming performance. Our eldest has a thing against Germany, ever since I picked them in the final of the last World Cup against his beloved Messi’s Argentina, so it was great to sit with him and eat popcorn while we came back from a two goal deficit to beat the World Champions by the odd goal.

Funnily enough, being 8, the lad is a pretty good barometer of the football press, because post match he was pretty convinced we were going to win the Euros, a state of affairs that lasted as long as the end of the Dutch match in Tuesday where the normal pessimism that England fans have to live with returned. He might only be 8 but he’s getting to experience the full gamut of emotions of supporting England in short order. 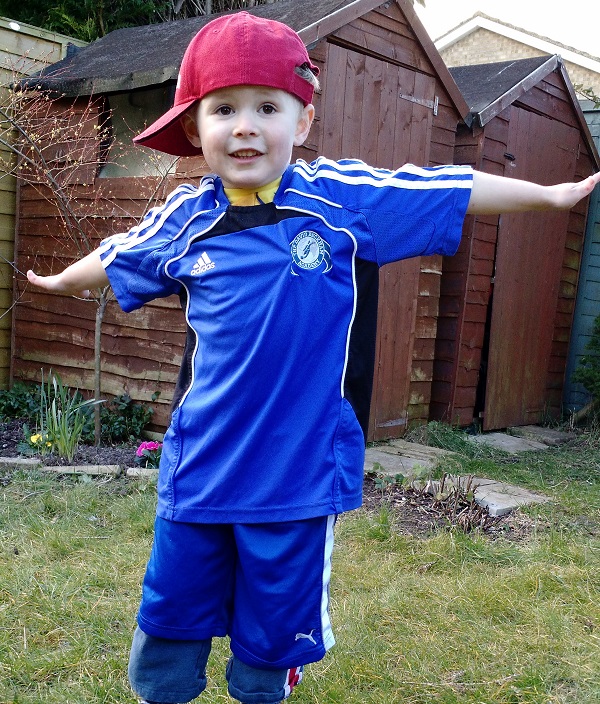 The most frustrating thing about the Germany match though was not being able to capitalise on the enthusiasm the next day. It literally spent the entire Sunday pouring with rain, which thwarted our attempts to get out an play some footy. Our garden actually had standing water by mid afternoon, which was pretty astonishing. Of course, it didn’t stop Ned going out there are having the proverbial early bath.

Ned loves his football, and he’s keen to emulate his big brother and play it whenever he can.  I need to get him out of that David Beckham Academy shirt and in to an Arsenal one though!

There are only 3 friendlies left until the UEFA Euros kick off- Turkey, Australia and Portugal, so we can hardly wait!

The McDonald’s competition to win one of three opportunities to be a player escort at a group game for England during the group matches of UEFFA’s Euro 2016 tournament runs until 10 April, you can enter it on their competition website.