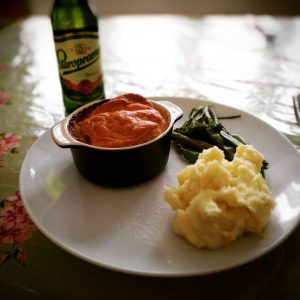 I don’t often do the cooking at home- during the week I’m home too late and at weekends we usually go out, which means when we get back the last thing we need is me faffing around in the kitchen for hours. On Saturday though I had the chance to do something with some chicken breasts (oo-er missus) that had been lurking in the fridge for a while.

Rather than simply fry or bake them, I thought I’d dig out our ramekin dishes and put the chicken to better use in individual chicken pies. Wifey sometimes cooks a lovely chicken and mushroom pie but I fancied doing something a bit different, and thought that maybe individual pies would encourage the kids to actually eat their darn dinner for once.

By the time I’d pottered around doing other stuff, time was running out so I went down the quick and easy route. The following recipe shouldn’t take much more than 40 minutes, and for most of that you can sit in the lounge sipping an ice cold beer while the football results come through.

Maybe a dash of chilli powder if your kids are amenable to it.

Dice the chicken and fry it in a pan until it’s pretty much cooked. This should take about 5 minutes on a medium to high heat, depending on how small you’ve diced it.

Add the condensed soup and sweetcorn and mix in well.

Add some milk to make the pie filling more runny- the liquid will cook off in the oven.

Turn the heat down so it simmers gently while you prep the pastry lids.

Take the ramekin and place it on the rolled out puff pastry upside down. Press down to make an impression of the rim of the ramekin, then cut it out with a knife. Repeat per ramekin.

Turn hob off and spoon the filling equally between the ramekins. The mix should be fairly thick at this stage, otherwise it will make the pastry topper soggy.

Pop a pastry lid on each ramekin, brush with egg, and bake in the oven until the pastry lid is golden brown (20-25 minutes).

If you’re serving to kids, take the children’s pies out as soon as they’re brown and leave to cool for ten minutes before serving, the ramekins can be very hot! Turn the oven off and leave the adult pies in there- the oven will keep them toasty until you’re ready to dish up.

I served the chicken pies with mash potatoes and greens. If you want to do mash, peel the spuds and set them boiling while the pie mix is simmering, the time it takes for the pies to bake is enough time for the potatoes to cook and be ready for mashing.