I’m not a very good blogger in some ways. I mean, I blog but I don’t sit there pouring over statistics, refusing to comment on other people’s blogs because their domain authority isn’t good enough, or any of the shenanigans that go on in the modern blogging world. My blogging is much like my enjoyment of Star Trek; I’m willing to watch it, read the odd article on it but you won’t find me fully immersed in it to the point where I’ll be attending conventions and practising my Klingon.

I don’t even Google myself very often- there’s a country singer with the same name as me and he’s more popular (so much for the omnipresent reach of parent bloggers eh?) and also a lithium prospector who made $264m the other year. Neither are me and for that I apologise. I did Google myself yesterday though and I was somewhat surprised with the results. 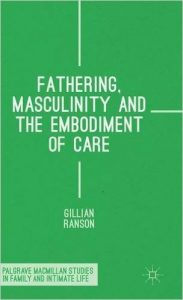 Right there on the front page was a link to an academic publication by a professor from the University of Calgary’s sociology dept, entitled Fathering, Masculinity and the Embodiment of Care.

Interesting topic, and I studied sociology many years ago under another Canadian called Rob Shields at Lancaster university. I remember writing my third year dissertation which was entitled “Computer mediated conversation and the reinvention of the self”, and getting it back with “Woah!” written in red pen next to the rather pretentious title. Happy days.

Since the book is an academic tome, it’s not cheap and whilst the subject matter is interesting, it’s interesting in a I’ll pay a tenner to read that but not £54 for the ebook sort of way.

This is from the press release:

This is a book about fathers who are caring for babies and young children – fathers who are stepping up to do the work more often associated with mothers. Gillian Ranson analyses an innovative combination of data sources, notably observations of, and interviews with, caregiving fathers, as well as fathers’ memoirs and online blogs. From accounts of fathers in Canada, the UK, the US and Australia, she shows what happens to men, as fathers, as partners, and as men, when they take on this kind of direct, hands-on care of their children. The experience, for most men, is transformative. They become deeply attached to the children in their care, and committed to engaged involvement in family life over the long haul. They challenge many stereotypes about men and masculinity as they become competent in a new kind of embodied practice.

Fortunately Gillian Ranson seems to be a sensible sort, and she kindly emailed me the relevant parts after I dropped her a line. Rather cheekily I asked for an electronic copy of the book but I know from my day job that authors actually have to pay for copies of their work, and consequently I wasn’t really expecting anything, so thank you very much Gillian!

The bloggers that are cited in her study only form part of the overall narrative discourse but are an interesting element none the less, and it’s interesting to read that Gillian read at least a years worth of posts on each of the blogs she included. 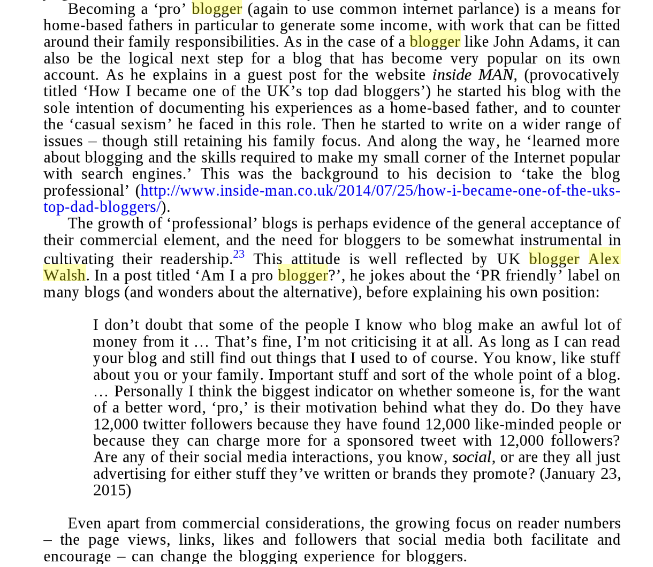 I like the point that Gillian makes on generating income that can fit in with family responsibility and think as dads and dad bloggers in particular we need to constantly work to maintain the balance between providing care, providing an authentic experience of fatherhood that others might find both helpful and maybe in some instances inspiring and providing some additional income for our families.

I don’t doubt we still have a long way to go; it is after all only 6 years since I was told to man up otherwise my wife would leave me for a real man when I wrote about the heartbreak of going back to work after my paternity leave had ended. A change has started but we’re still on the slip road of the motorway that leads to a proper reconciliation of masculinity and fatherhood.