I love Angry Birds. It’s one of the few puzzle games I’ve completed (well I’ve completed the free version of one or two iterations of it, so that counts) but when the news broke that a movie was being made, I was more than a little sceptical. A film about a physics based puzzle game where you hurl flightless birds at pigs in rickety houses looked like a brand stretch too far. 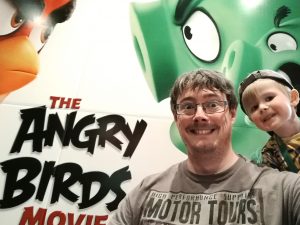 Weighing in at 95 minutes (including the end credits I guess) Angry Birds isn’t a movie that outstays it’s welcome. Given the relatively thin plot premise, that’s probably just as well but the run time also helps give the film the feeling of being absolutely packed to the gills with puns and sight gags, which helps in terms of the fun factor.

The plot is paper thin- a colony of flightless birds, including outcast Red, who has anger management issues, get visited by a group of green pigs. Red is suspicious but the colony ignore his warnings, only to find the piggies steal all their eggs. A mission is launched to recover the eggs that sees the birds fire themselves via catapult into the pig’s city.

If that doesn’t sound enough plot for 95 minutes of film, you’re probably right but there is enough in terms of character interaction and humour to see it through, even if the whole catapult thing is unbelievably contrived.

At it’s heart though, Angry Birds is a funny film. There are sight gags for parents (the Shining parody particularly sticks in my mind), as well as plenty going on for kids too. I doubt it will bear (m)any repeat watches but we came out of the cinema pleasantly surprised.

The screening wasn’t organised by Sony but by Peparami, the official sponsor of the movie. You may have seen my tweets about it:

I have to say Peparami were great hosts, and as far as tasty meat based sponsors go, they’re probably difficult to top. Even if the Peparami monster might have called me an idiot in the Q&A session, I’d still like to say a big thank you to them for having us at their advance screening. We go to a lot of screenings but I think it’s been a while since we’ve had one in a film companies private screening suite rather than a West End cinema.