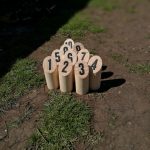 You may have read our post about wild camping- we went to a great camp site over the Mayday bank holiday, where there were literally no amenities save a large fire pit and a composting toilet. We had to make our own entertainment. For the adults this involved fire and alcohol (responsibly taken- honestly) and for the kids it mostly involved running around like lunatics.

We did also take the outdoor game Smite with us though, something I’d been offered to review the previous week and something that seemed tailor made for a camping weekend.

Like any game of throwing and skill, there are some rules to follow- the most important of which is probably starting a good few metres back from the 10 pins. We experimented; with under 10’s it worked better at 2-2.5m, otherwise they had trouble hitting the cluster to start with.

Smite removes the issues that an uneven surface can afflict on other outdoor games like boules. We like playing boules but find it really only works well on the beach since it’s flat and the balls don’t run for miles thanks to the sand. Most camp sites, this one included, aren’t great for boules, so we usually end up with the kids chasing a football, each other or some poor creature of the wild.

How does Smite do this? Instead of a ball, you’re effectively throwing something akin to a rolling pin. It can roll, go end over end but the end result is it doesn’t travel anywhere near as far as a ball would: 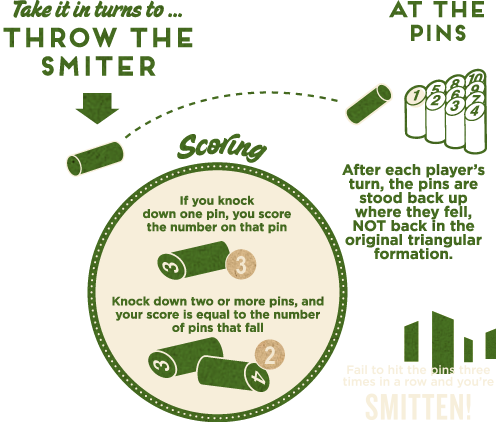 The above graphic, as well as showing you first hand the “Smiter” also gives a good indication of the tactical scoring. After a few rounds, the pins can be spread half way around the camp site, and I have to admit we moved a couple to stop the kids effectively chucking the Smiter directly towards our fire.

Smite comes in a canvas carry case, packs down fairly compactly and is actually great fun to play. A word of advice though, don’t play it drunk if you think it might lead to a “victory lap of the camp site whilst screaming at the top of your voice” because you’ll be reminded of it in the morning. Constantly.

Smite has an RRP of £31 inc delivery, and is available from all good retailers.