As I get older (it happens, without much effort on my part), it gets increasingly difficult to think up new and exciting presents to get my wife. We started dating 16 years ago and have had many birthdays and anniversaries since. Every time it gets harder to find a present that’s thoughtful, affordable and great. I’ve fallen down once or twice too- last year with some earrings and a necklace that weren’t really right. We’re not a household that can’t drop hundreds of pounds on pressies for each other, so it’s very much the thought that counts.

Fortunately my chum Paul happened to RT something in to my Twitter time line that seemed absolutely ideal:

COMMISSIONS! I have 10 commission slots open for June! Info here: https://t.co/9oZ4rpmbVQ I can draw you! Or a loved one! Or a pet! Yeah!

I clicked on Rachael’s link and had a shufty round her website. I liked what I saw, her art was bold, colourful and it of course helped that she’s drawn for Doctor Who comics (we’re big fans). I dropped Rachael an email to discuss potentially getting a family portrait of the five of us as an anniversary present for wifey.

Rachael’s rates for commissioned pieces are very good, especially considering you’re getting a unique piece of work, starting at £30 for an A4 single figure in black and white, right up to £150 for a full colour A3 comic page. Since Rachael does the colouring digitally, if you chose a coloured illustration, you get the final file digitally, with the original inked art in the post. That’s not a problem; places like Photobox will do you an A3 colour print for under a tenner.

After a brief email discussion on what I wanted, I sent Rachael far too many photos of our family, and a brief paragraph about each of us to give her an idea of our characters. A few days later (after payment, which I made via PayPal), Rachael dropped me a quick proof sketch, which I fed back on. I then had an inked version, and finally a coloured high res image: 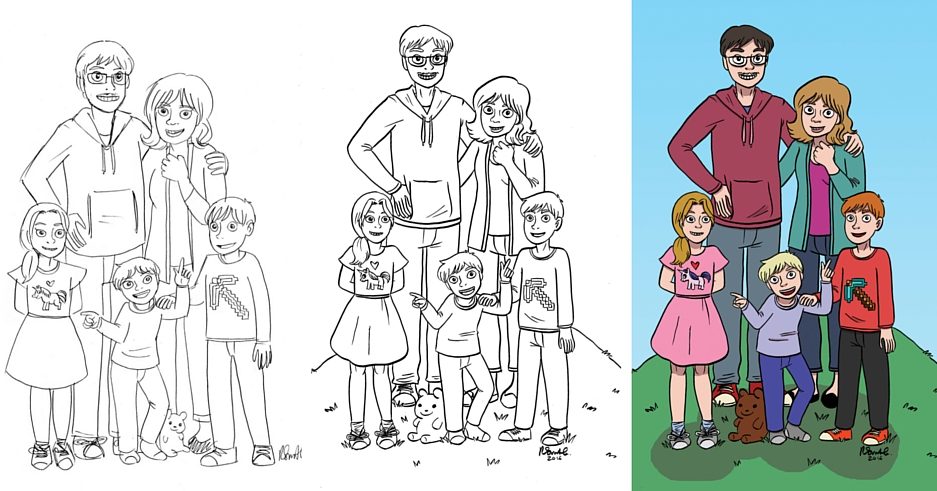 The whole process felt really collaborative and has resulted in something truly unique that is currently hanging on the wall in our sitting room!