Although as a poet probably most famous for either The Rime of the Ancient Mariner or Kubla Khan, Samuel Taylor Coleridge will always have a soft spot in my heart for a quote attributed to him about the typical British summer:

”Summer has set in with its usual severity.”

I don’t know the context, it was written in a letter in May 1826 to a friend called Charles Lamb but I like to think it was a rail against the weather pissing down on poor old Samuel from a great height.

Our 7 year old has decided to start writing poetry, and thereby enter the ranks of the poets. We’re only two days in to the school summer holidays and she’s penned this masterpiece which sums up how the holidays are progressing nicely: 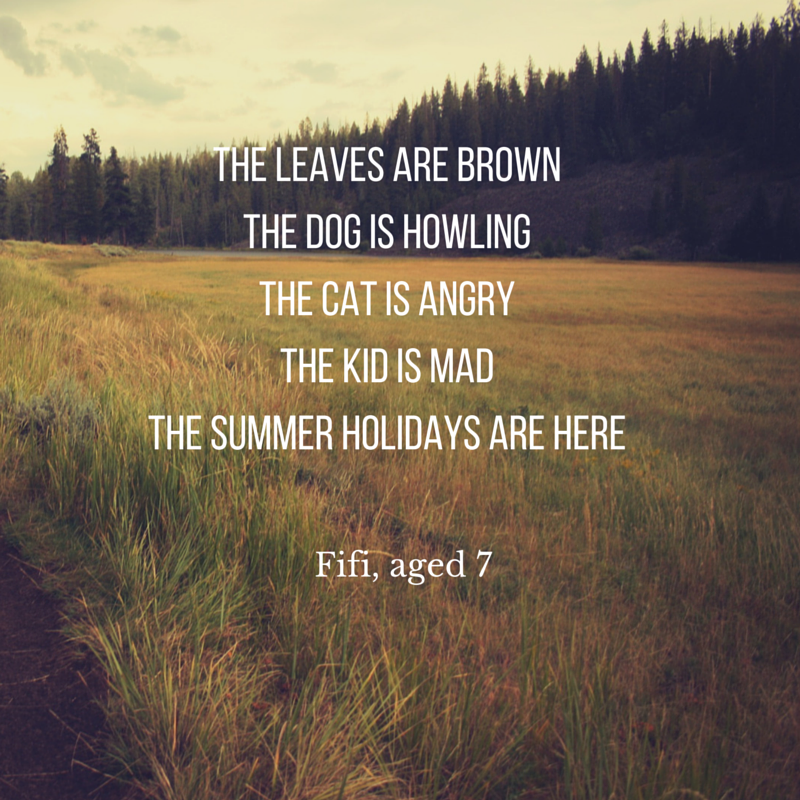 Note: it helps if you say it with a look of forlorn hopelessness on your face, and a tone of mild disapproval in your voice.

We’ve always encouraged our kids to read and write, providing an almost endless supply of books that line the shelves in the kids rooms, and journals and notebooks for them to draw or write in.

Sometimes they just doodle, sometimes they go off on a massive flight of fantasy. At one point the boy paired off his entire class, changed his name to Larry and took two wives. Fifi tends to write fiction based around friendship, animals and mild peril. Poetry is a fairly new outlet for her but she’s been reading some kids Shakespeare, Bill the Movie and watching all the Horrible Histories, so she’s probably picked up something from that.

Whatever, it is a poem I can be proud of. We’ve had a troublesome weekend with the heat and tempers and everything, so it’s fairly accurate. Here’s hoping that tempers calm down a bit this week!