The Nest Smart Thermostat is one of those Internet of Things (IoT), things it’s a thermostat that you can control via it’s simple interface but also one you can control via your smartphone or web browser. There are several competing devices and there and in fact the Nest replaced one of them, the British Gas Smart Thermostat that we’ve had for a few years now. Nest is however owned by Google (well, Alphabet, Googles new parent company but you get the drift), a company that has an awful lot experience in designing user interfaces and making complicated things work in an easy to understand fashion.

If you’ve ever programmed an old fashioned central heating timer, you’ll know how incredibly fiddly and complicated it can be. Think of it as similar to programming the VCR back in 1985 before any of that onscreen stuff came along to make it easier. 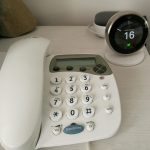 Now Nest is something that you can install yourself, there is an installation guide in the box and plenty of really useful YouTube videos but it’s not necessary because a lot of retailers sell it bundled with professional installation. Hurrah! The thermostat controller itself can be wall mounted where your old conventional controller used to be or it can simply sit on the side next to your phone. Me being me, it’s sitting next to our phone, SONOS bridge, and  Panasonic smart alarm hub. Yes, I am that person.

Setting up the thermostat was something that the installer talked us through but since I decided to change our wireless router to a Netgear monster the following day, I went through the process myself. The controller works as a dial which you turn to select the different options and you press the whole thing to select. To connect the Nest to your wifi, it’s simply a case of selecting which wifi network you want to connect to and using an alphabetic scroll wheel to pick out your password. It’s obviously not quite as quick as typing it on your phone or keyboard but it’s not cumbersome by any stretch of the imagination.

Once the Nest controller is connected, in theory you don’t need to touch it again as the app has everything you need. One clever feature the app has over others I’ve used is the ability to set one device as your “home” device- Nest will automatically sense when that smartphone is either away from or at home and adjust accordingly. So if you leave in the morning without turning the heating down or have overridden your schedule, you don’t have to remember to adjust it.How clever is that?!

In terms of using the app generally, it’s quite simply, allowing you to alter the temperature or set up a schedule. As you can see from our schedule, as it’s summer, we don’t have it set very high: 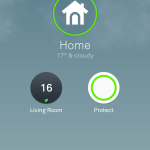 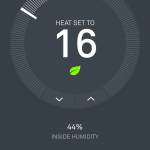 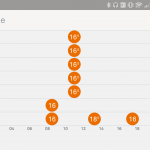 So as expected from Google, the app is really simple to use. It works equally well on Android and IOS, which is a big step up from Hive- for several months the app for our British Gas thermostat had stopped working on Android. The IOS version had been upgraded to work with Hive but the Android version hadn’t, which meant my wife could use it with her iPhone 4 but I couldn’t with my Android phone. Needless to say Google is too big a player to let something like this happen with Nest, and we’ve had no issue with the app on any platform!

Away from the app, unlike some other smart devices, the Nest thermostat works well without using your smartphone. The thermostat itself is really well designed; it doesn’t look like a piece of technology that you’d want to hide behind a potted plant. It has a proximity sensor that means the display only lights up when it senses movement in it’s direct line of sight. For something so obviously high tech, the Nest thermostat is remarkably easy for technophobes to adjust- my mum managed to successfully raise the temperature to the 23 degrees she’s more used to at her home without any guidance from me, which is a glowing endorsement.

For me though, the best part of a smart thermostat is keeping the temperature low when we’re out of the house, and using the app to turn the heating on when get a couple of miles from home in the evening, it’s an efficient (and therefore cheaper!) way of controlling the heating!

Nest retails for a recommended price of £199, although if you shop around you can get it installed for that price. It’s a worthy investment and from experience, it trumps other smart systems out there. Given it’s owned by Google, it’s not likely to switch it’s servers off tomorrow either.