Ever since we got our own place 14 years ago now, we’ve been properly into gardening. In our first place it was a case of transforming the concrete and gravel monstrosity into something with plants and greenery but ever since we moved 10 years ago to our current home, and had kids, it’s been more about growing our own food and getting the kids involved in the whole process from planting the seeds to cooking/eating the end results.

About 5 years ago, when our eldest was 4, we gave our garden a huge makeover, moving the shed from the middle of the back fence in to the corner, turning it into a summer house and building some raised beds in front of it for some grow your own fun for the kids. 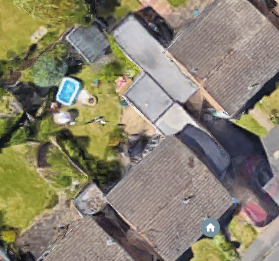 Our garden, plenty of space for growing stuff!

Our kids range in age from 4 to 9. The nine year old is pretty competent at most things, even if that has lead to him eating all of my bacon recently, so we entrusted him with digging over the vegetable patch (under supervision) this year. The only perennials we have in there are the raspberry bushes, which are probably the best thing you can grow with/for kids because they’re almost like a weed and require very little help once they’re established, which meant he could give the soil a jolly good turn with the lady fork (not that he’s a lady, but technically a lady fork is quite a bit smaller than a standard one, so it’s more suited to his 9 year old frame).

While the eldest might be suited to the manual labour side of things, Ned our 4 year old isn’t allowed anywhere near things that could either maim, cripple, wound or decapitate. But he does an incredibly valuable service to the family gardening enterprise because he has the gloves and bucket and is on snail & slug watch. Every single time Ned finds a snail he is as excited as he was the first time he ever found one. It’s so cute. Sometimes, before we dispose of them down the street in one of the green areas, we do a bit of snail racing:

Snail racing is fun, and it adds a bit of excitement to doing the chores. No snails were harmed in the making of this video! 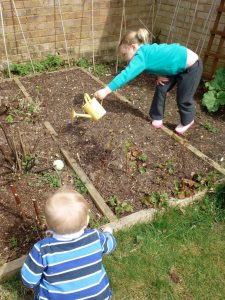 Because the eldest doesn’t have the attention span to do something regularly and Ned can’t be trusted to not destroy everything when you’re back is turned, Fifi (aged 7) is responsible for watering the plants every night as necessary. Sometimes, especially now in the summer holidays when they kids go to bed later, she’s helped by Ned, who will go around and hunt for snails in the twilight. They make a formidable team but one or both of them usually get soaked by the time the plants have been watered.

I was asked to contribute some tips to a guide for kids gardening over at Capital Gardens, the hard part was picking which things I think are the most important to be honest. When we’ve had wet and mild winters like the one just past, it’s important to make sure that you have someone on slug/snail patrol because your plants will get eaten to death if you don’t. A mild winter means that there are a lot more of the little leaf munchers about than normal, so it’s important to keep on top of them.

In terms of what to grow, it’s easy to get raspberries established and they grow very quickly. You can even, with supervision, let the kids chop them down in the autumn to facilitate the new growth next year. As fun plants to grow from seed though, I would recommend peas and radishes. There are plenty of below ground plants that are easy to grow but radishes are something that are a little bit different and pep up a summer salad. Peas though, like raspberries, can be eaten straight off the plant and there is something very special seeing your kids sitting on the grass, shelling pods of peas and scoffing them up as a snack. When so much of our food comes ready bagged, tinned or processed, it’s really important that we let our kids connect to what they’re eating.