A little while ago we were invited as guests of the Imperial War Museum to their Duxford site in Cambridgeshire for their autumn airshow, Meet the Fighters. Since wifey was due to be away with Fifi, I thought it would be an ideal boys day out and I’m pleased to say I wasn’t wrong.

Typically we managed to pick the one day of the whole week where the weather was properly atrocious; it was windy, and it rained an awful lot. Fortunately for us, the planes still flew and it was great to see the Hurricanes and Spitfires up, and there was also plenty to do in the museum itself, which is on a huge site that covers an entire old (WWII) airfield itself.

We have been to Duxford before, but we haven’t been since the museum closed it’s American hangar for renovations and re-display and we’ve never been on the day of an airshow before. That hanger had a few of my favourite planes in, the Lockheed Blackbird and the Thunderbolt, so when it was closed, it felt like we were missing out. The American hangar is now opened and fully re-displayed though, so we spent a good hour in there in-between the rain free periods.

Ticket sales for the airshows are prebook only and they are HUGELY popular. So much so that there are traffic management systems in place around the site and the surrounding countryside. The airshow itself didn’t start until 1:30pm but we arrived at around 9ish and it was already very busy.

Busy but there was lots to do. Before we even saw a plane in the air, we’d listened to a talk on the Lockheed Blackbird by an ex Blackbird pilot and watched the wonderful Bluebirds sing us some war time songs:

I’d also eaten my body weight in ribs and pulled pork at the Workshop restaurant (pro-tip, their family platter is more than enough to share) before the air display and we’d been round most of the museum too: 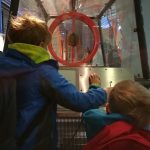 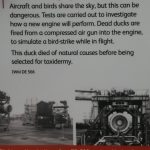 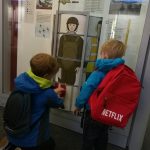 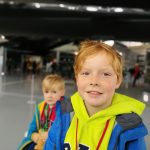 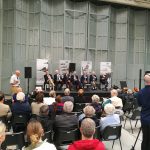 Staff who were stationed at Duxford 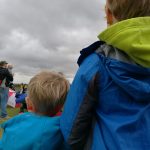 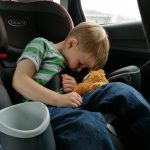 Asleep on the way home

The airshow itself was called Meet the Fighters, and there were plenty to meet. Some didn’t fly due to the conditions- it would have been fantastic to see the Vampires up in the air but they did run past on the run way- but we did get to see the Bearcat, some Me109s and Spitfires, which were was the highlight of the day for me personally. Typically the next day, Sunday, was glorious weather, which would have made the incremental cost for a weekend ticket more sensible if we’d been paying ourselves (family day ticket is £83+£5 parking, a weekend family ticket is £120.35+£10 parking) and I wouldn’t have been doing 5 loads of laundry to hang out on in the baking sun!

From what I’ve read, the full flight programme happened on the Sunday, so we were just unlucky with the weather on the Saturday. This is obviously a risk you take into account when you book to attend any outdoor event but we had a great time none the less! There is so much to do at Duxford, regardless of the weather. There is an obvious premium on airshow days (a normal family ticket to the museum is £47, so you’re paying a £36 premium for the airshow effectively), but it’s definitely worth it to see the planes in flight, even the limited numbers we saw!