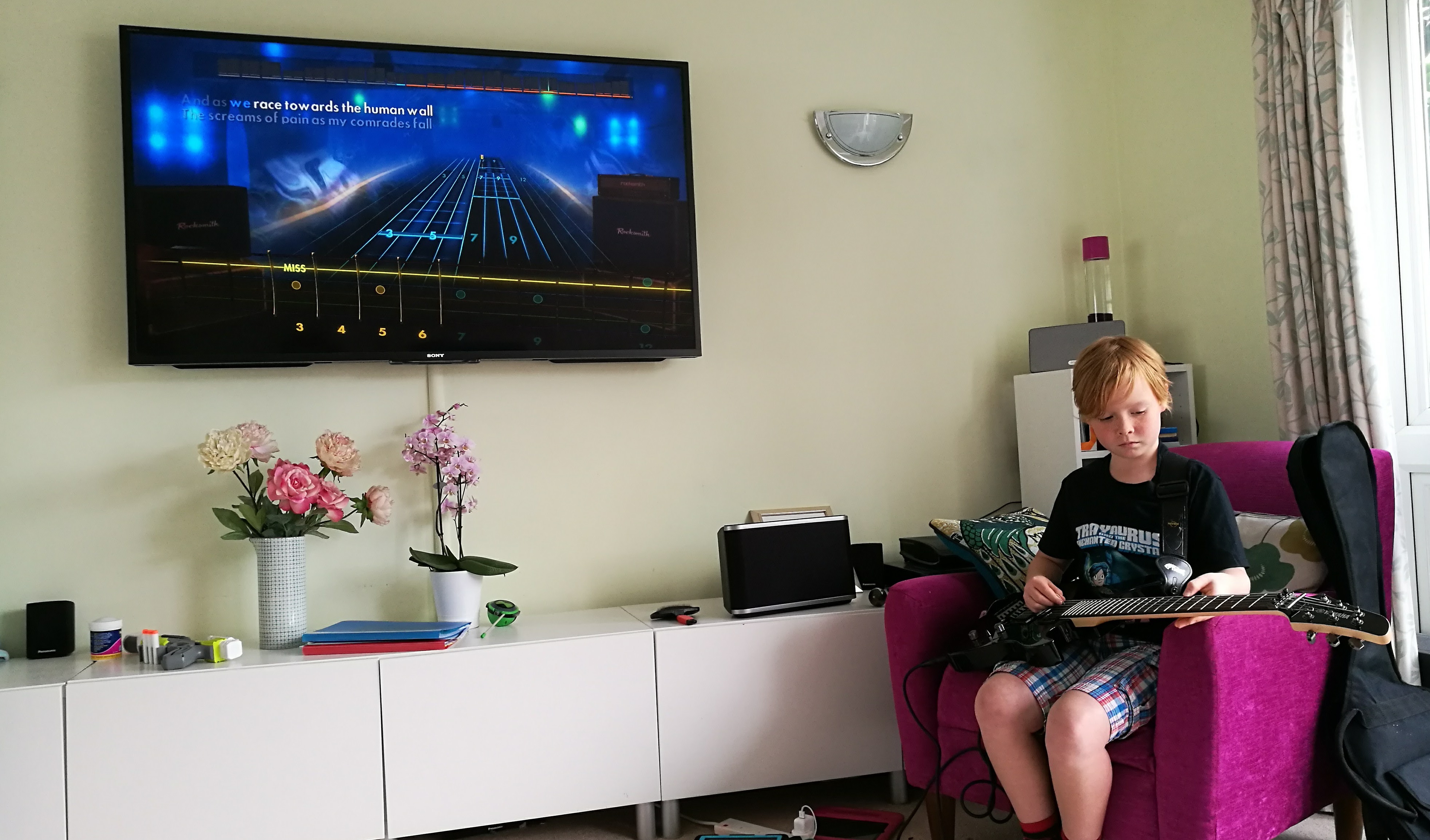 When the boy got 93% on his first drumming exam I was surprised to say the least. He refused to practice for almost a month before the actual exam, froze in the practice room before the exam itself, and didn’t say a word for an hour and a half afterwards. We spent the 3 weeks between the exam and the results arriving on our doormat prepping him for failure, telling him that we were proud of him for even doing it (we never thought he’d manage to go to an unfamiliar exam centre and follow an unfamiliar examiner) but we were blown away. 20/20 on two of the three composition pieces, 18/20 on the third, 6/10 on the listening test, and one other mark dropped in the rest, it was nothing short of incredible and his teacher was blown away too.

The boy has been pestering me to learn electric guitar for a while now but with the cost of the lessons, I’ve said no. I had looked in to getting him a half sized guitar and letting him loose on Rocksmith 2014, a console/PC videogame that is best described as Rockband with a real guitar. Rather than playing a plastic toy guitar in time to the tunes, you basically plug your real guitar in and learn how to play it as you play the game. Unfortunately from what I’d read, the tuning for smaller guitars means that they don’t work with Rocksmith, which is a shame, so I’d left it at that.

After some pestering though (okay, a lot of pestering), I said I’d let him have a go at the game with my guitar (I got it for my 40th birthday and will have lessons at some point, promise!), and I fired up the game. Fortunately the neck isn’t very wide, so although it is a bit of a stretch, he managed most of the fingerings the lessons took him through. After an hour or so of lesson, he wanted to try out some of the songs.

You can see him playing Iron Maiden’s The Trooper above. At the most basic level, the game has you hitting individual notes on the same string/fret at specific times but by the time he’d moved on to The Trooper, Rocksmith had him hitting different frets on different strings at various points throughout the song.

You might notice that he isn’t actually looking at the screen though. That’s the part that’s got me convinced he’s a musical genius. The photo is taken from maybe his third or fourth play through of the Trooper, and by this point he’d learnt most of the fingerings. He couldn’t play them quickly enough as he’s not practised enough yet but he knew where he needed to move his fingers to and he knew the timing. When I asked him, he said that’s how he plays the drums, he learns the pattern fairly quickly and then it’s just practice.

Rocksmith 2014 is good fun but from what I’ve read, it’s really an introduction to learning to play the guitar. The boy is helped by the fact he can read music, so going forwards he should be able to pick that aspect up fairly quickly. I think for him, Rocksmith is an ideal way to build up his callouses and learn the “muscle memory” he’ll need to become a proficient player. At some point I’m going to have to find the money for guitar lessons aren’t I?