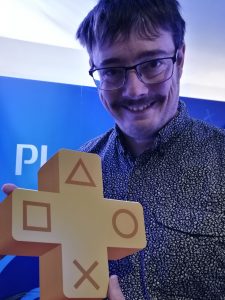 The semi regular Playstation Kids and Parents Showcase happened a couple of Saturdays ago and we were invited along to play some carefully curated family friendly games that are out now to buy.

There was no PSVR (boo!) but loads of games and it was nice to catch up with erstwhile Eurogamer writer Ellie Gibson who was on hand to provide a professional gamer parents perspective on things. Ellie has also written a parents guide to Playstation, which you can view here.

I have to admit when I think PS4, I think triple AAA big budget shooty games like Call of Modern Battlefields and Grand Theft Gears of War, alongside FIFA Football and the LEGO games. Now that I think of it, there aren’t a great number of racing games, or fighting games on either of the big home consoles, two genres that I’ve always loved. Anyway, I’m digressing, as this was a showcase aimed specifically at addressing the deficit in family friendly gaming in my gaming collection, and I wasn’t about to miss an opportunity to play some games and have some fun.

The invite might have been free and the kids all got a nice goody bag, but the trip cost me almost £100 in game purchases as a direct result of what we played. Goodness me, I’ve never had so much fun in a basement!

Here is a run through of the stuff we played together and I ended up buying. There is a real focus on local multiplayer to a lot of it, which means there isn’t so much fighting over the controller or who’s “go” it is.

This game has been out for ages but it’s easy to see it slip under the radar as it’s download only, you can’t buy a boxed copy. I picked it up for £13 and for that price it’s completely the best multi player game I’ve played in about 20 years. I don’t think I’ve had more fun since I went to a gamer meet up and we played 8-player Bomberman on the Sega Saturn in the mid 90’s.

Each player (up to 4) gets control of a pixelated character on a 2D platform strewn screen. If you drop out the bottom, you reappear at the top, and if you walk off to the left, you reappear on the right. Your character can walk, jump and fire in several different directions. There are power ups that make you faster, let you fly, make you invisible, and you can get different sorts of arrows to shoot (favourite is probably the bomb arrow, followed by the bramble, which covers whatever it hits in brambles!).

It’s simple but that’s what makes it fun. There are a plethora of different modes and changeable parameters (number of kills, death match, last man standing, team battles, etc) that mean it’s never dull but the action is so frenetic, you can’t help but love it. Even our 4 year old joins in and I’ve had to buy another PS4 controller so we can play 4 player. Simply put, if you’re a parent and have more than one PS4 controller, this is the must have game.

Tricky Towers takes the best puzzle game ever, Tetris, and gives it a new spin and in doing so reinvents it for a whole new generation. All the puzzle blocks in Tricky Towers are taken straight from Tetris but there’s a twist- you have to build a stable tower on top of your house that reaches a certain height before your opponent (human or computer) does. To make things harder, the blocks don’t just move in block width increments, they move in quarter(?) block increments, which means you can get gaps between your blocks, which then teeter and totter alarmingly, and can even tumble down if you’re not careful.

Tricky Towers is definitely not as frantic as Towerfall Ascension but it’s no less fun for it and it’s also more accessible for younger kids and partners who haven’t gamed since the original Tetris on the Gameboy. I paid around a tenner for a download of it and when we’ve managed to stop playing Towerfall, it’s been our next go to game.

Out earlier this year, Trackmania Turbo is a proper arcade racing game, with over 200 prebuilt tracks to race on BUT more importantly a track designer tool that is simple enough for a 7 year old to use. Since Trackmania Turbo has magnetic rollercoaster style track pieces, given the right level of enthusiasm, this stops being an arcade racer and becomes something more akin to Wipeout with cars. It’s cracking good fun, I got it on special offer on PSN but you can buy the disc version for £24.99 from Amazon.

Those are the big three- if you don’t read any further, good for you, go and buy those games as they’re brilliant.

We also loved LEGO Star Wars the Force Awakened, but I went to the launch of that at the Shard, so you can read my review here. The same goes for LEGO Dimensions, which is pretty on the PS4 than the Xbox 360 (my review of that is here). Rocket League was good fun but perhaps a little bit too tricky for the younger family members (it’s football with a giant ball and cars, so the inertia is quite difficult to get the hang of). I also played some Overwatch, suitable for 12+, and if you’re a martyr, you can watch me playing it on my YouTube Channel as I already bought it. It’s a fun first person shooter with no blood or gore and it’s jolly good entertainment, attracting a younger audience than the sort of person who plays Call of Duty, which means that dads with limited gaming time don’t get mullered by nimble fingered kids.

So thanks Sony for inviting me and costing me a packet!