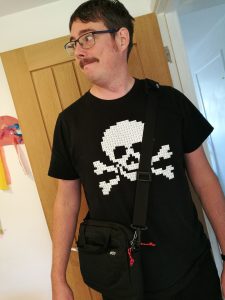 My man bag of choice for the last three years has been the awesome STM Linear. Although marketed as an iPad sized bag, it’s taken my ASUS Transformer Pad, and various other bits and bobs with ease. It’s rugged but smart (so usable for work). But things change, and now I’m rocking a Microsoft Surface 3, it’s not quite big enough. Fortunately the nice people at STM averted the disaster and offered me the STM Velocity Swift to review.

The STM Velocity Swift shares all the traits I loved out the Linear; it’s tough but stylish and smart, and it’s brilliantly well padded. My Linear is three years old and I’ve used it a lot but it’s still pretty much as good as new. A couple of months in with the Velocity Swift and its a similar story. It still looks as good as new, despite the hard use it has.

In case you’re wondering how big the capacity is, the inside of the STM Velocity Swift is just smaller than A4. This means you need to fold any foolscap paper to get it in but the increase in size over the Linear means I can get my Surface 3, a PS Vita, my Nvidia Shield tablet and, at a push, my Bamboo Spark. If I ditch the Spark, I can also get either a mains charger or a battery pack in too with no difficulty.

However unlike a lot of cheaper generic laptop bags that are designed for budget 15/15.6 inch laptops, this is designed for smaller devices, so they fit, are protected and don’t rattle around. On top if that it’s also pretty stylish too. Rather than clipping shut, the Velocity Swift has compartments that (dual) zip shut, with the exception of the rear back pocket, which doesn’t close.

Internally there are a couple of non removable dividers to kept your tech separate, the largest of which takes either an oversized tablet or an ultra portable (nettop, MacBook Air, Surface 3 sort of size).

The STM Velocity Swift comes in 3 sizes, 11, 13 and 15 inch. There isn’t a great deal in price between the three (RRP is £50) but that old adage of you get what you pay for definitely rings true here, and given the bags heritage, I’ve no doubt I’ll be using it as long as I have used my STM Linear.