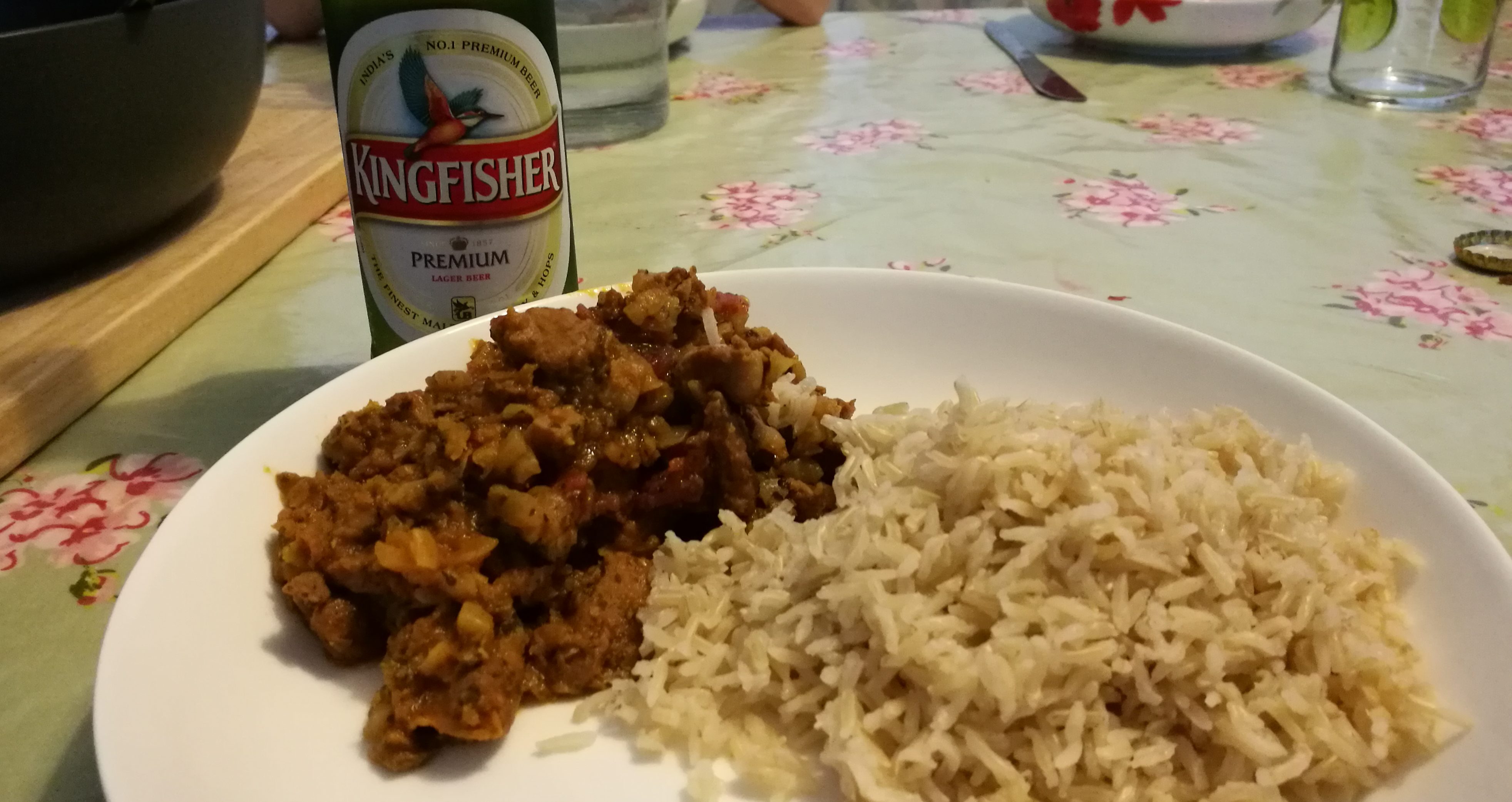 National Curry week is fast approaching and we love curries in our house, so when Tyga contacted me with an offer of one of their spice packs and some Kingfishers, I wasn’t exactly going to say no. In recent times I’ve been trying to cook more of our own, not only because it’s cheaper, but also because a review of the food hygiene ratings for our city shows some of the curry houses we’ve frequented need more than a little improvement!

The spice pack came in a cardboard box, not dissimilar in size from a Black’s Chocolate selection box, with a set of recipe cards and a key, showing what was in each sealed tub and which recipe it went in. The recipe cards contained a list of fresh ingredients and a dead easy recipe to follow.

Since we like curries (have I mentioned that already?) I thought I would do a comparison last Saturday. I’d cook the most enticing recipe from the Tyga pack, the lamb dhansak, and I’d also cook our favourite recipe book curry, Rick Stein’s chicken passanda, from his recent India cookbook. I love Rick Stien’s recipes for a couple of reasons, they’re usually really tasty but they’re also unfussy and simple to do- there’s none of this Jamie Oliver 3 hours of fiddling about rubbish. 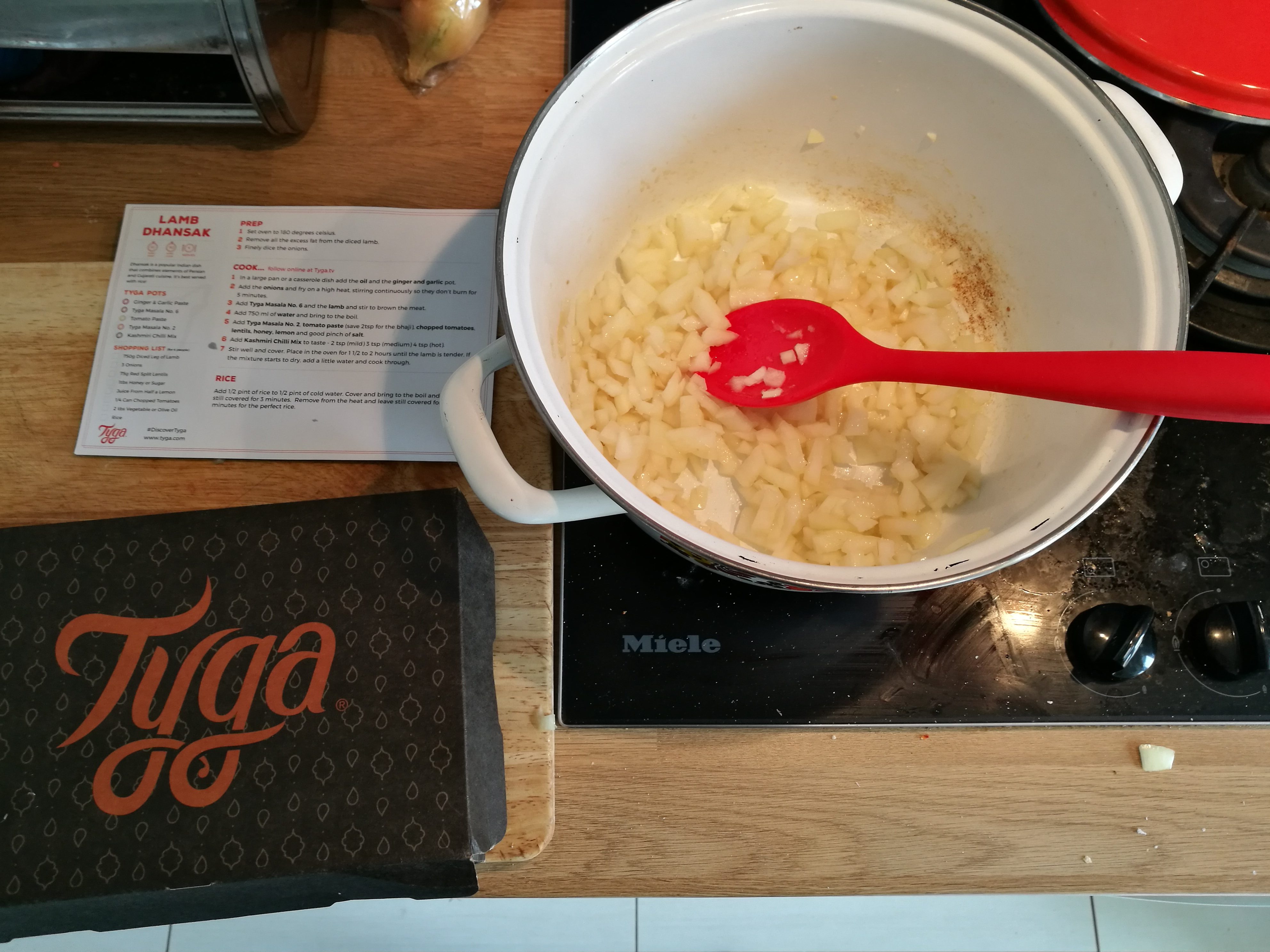 The lamb dhansak recipe was easy to follow, it was basically onion, lamb, some sugar, water and chopped tomatoes and even I can’t get that wrong. I tried, as to get the authentic curry ambience I cracked open the first Kingfisher when we got back from Waitrose. It turns out that the mixture of recipes I picked worked really well- the time that the dhansak spent in the oven was plenty of time to cook the passanda. It’s almost as if I planned it (I didn’t). The only snag I hit in the whole cooking process was the fact I failed to check the baking cupboard to make sure I had enough flour to make the naan bread. I’ve got nothing against the oven warm pre-baked naans you get in the supermarkets but if you’ve ever had one from a curry house, you’ll know they’re completely different and about a million times nicer.

I like cooking so it was a jolly good afternoon, and as we sat down to scoff the food, I stuck the Arsenal/Chelsea match on the telly. I’m a huge Arsenal fan and I know that we’ve had no end of trouble with Chelsea in the last ten years. What better way to watch my team stuff Chelsea 3-0 than with a clutch of Kingfishers and a couple of tasty curries to accompany them? Hang on a moment, that’s the wrong way around isn’t it? Anyway, everyone tried the dhansak after a spoon of the more familiar passanda and they all loved it. Despite putting 750g (a tenners worth) of diced lamb in it, there was sod all left at the end, and when the rice ran out, the lad went and grabbed the wraps from the kitchen to mop up what was left.

There are a lot of false economies in home cooking, some famous chefs (and food bloggers to that end) will claim that their delicious meal only costs £1.43 per serving but what they don’t tell you is you’ve got to buy excess perishable goods to get the quantities you need which unless you make half a ton of whatever it is, or sit for hours finding other recipes that use the same idiosyncratic ingredients, will lead to wastage and a much higher actual price per serving. That’s where I found the pot system and simple recipe from Tyga really good. There wasn’t any Jamie Oliver “just add a sprig of this from your herb garden” nonsense, it was all there and easy to follow. You can get your first kit for £4.99 from the Tyga website.

Today I’m going to do another one, although this time I’ll have to supply my own beer as the remainder of the Kingfisher appears to have mysteriously evaporated!