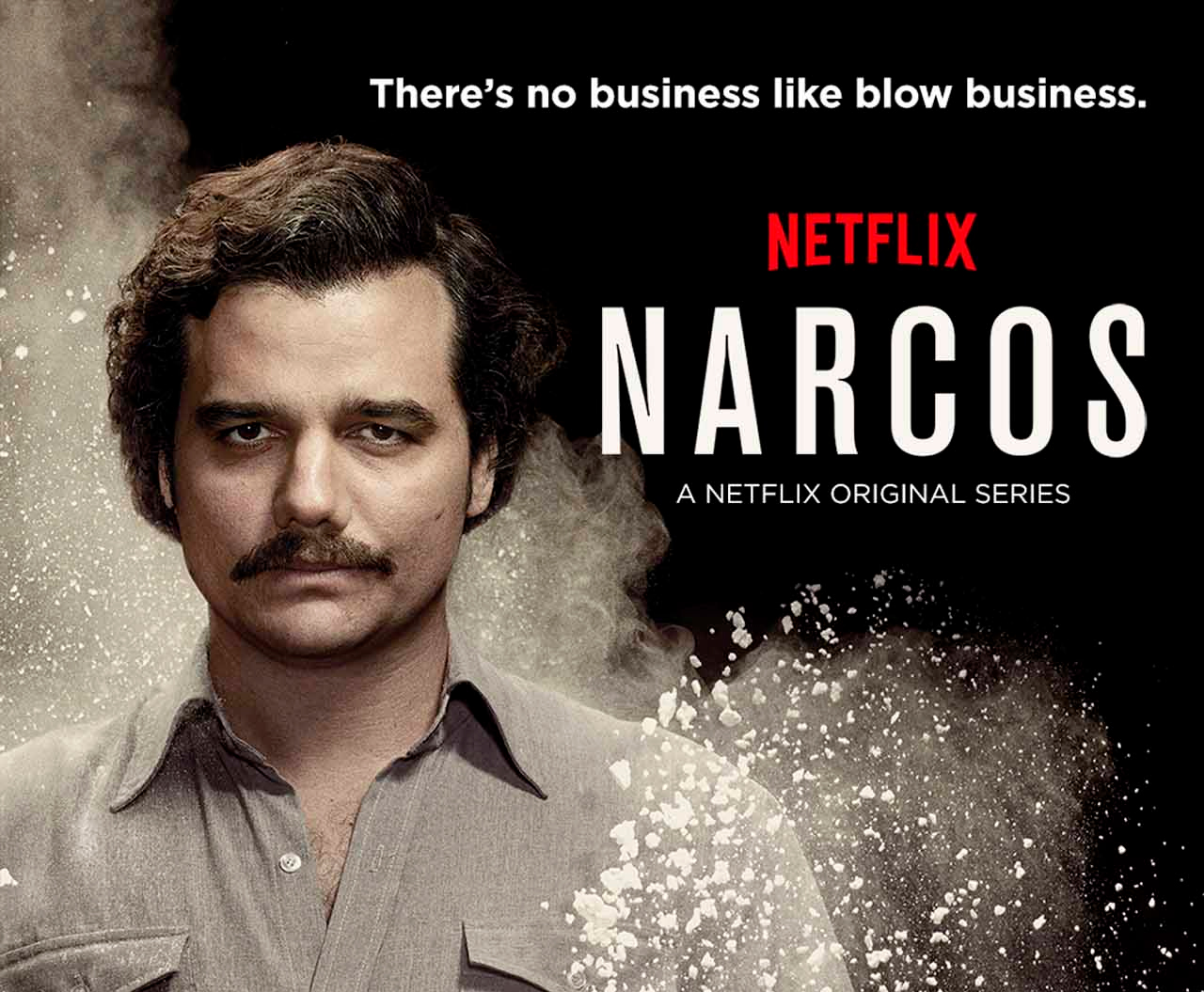 While being part of Netflix’s Stream Team means we get to look at a whole load of brilliant kids stuff, Netflix obviously has so much more to offer than Voltron, Paw Patrol and Horrible Histories. Mind you, I often sit and watch the Horrible Histories stuff myself, it’s brilliant, so brilliant, we even bought Bill, the Shakespeare movie from the people behind the show. Fifi loves it so much, it’s on constant repeat and will undoubtedly confuse the hell out of her when she actually gets to do Shakespeare at school and finds out he didn’t have to dress up as a large vegetable of thwart the Spanish.

Anyway, I’ve digressed because I wanted to enter the adult area of Narcos. Narcos is a show that charts the rise and fall of a certain Pablo Escobar, the world’s most notorious drug lord and, considering that it’s based on real life events, presumably future series will continue the battle against the Colombian drug cartels.

The thing I love about Narcos is it’s a slow burn. The first episode starts with a shooting and the series deals with the events leading up to that shooting. Because Netflix don’t have to rely on immediate ratings success to please advertisers, their homegrown shows don’t have to start with a big bang that inevitably sees the budget peter out as you hit the third quarter of the series in order to leave some budget for a big finale.

I was talking to my wife about this while we were finishing season 2 earlier this week. She said the first couple of episodes were quite slow and I agreed, we got to know the characters and when you’re invested in the characters, it makes what happens to them more powerful.

Although there are many characters, the three pivotal players are Pablo Escobar, Steve Murphy (who narrates), and Javier Peña, the two DEA agents tasked with bringing him down. Although you might recognise Javier Peña as Oberyn Martell from Game of Thrones, and Steve Murphy is going to be the main baddy in the final Wolverine film, Logan, without a shadow of a doubt it is Wagner Moura’s portrayal of Escobar that completely steals the show, and rightly earned him a Golden Globe nomination.

Escobar starts off as a small time smuggler of stuff over the border, VCRs, and other white goods but when someone points out that drug traffiking can make more in a shipment than a lifetime of smuggling goods, Pablo decides on a change of career to devastating effect.

The show is shot through with contemporary news footage from the time and is obviously based on real events. Even so, some of it seems so astonishingly outlandish that you find it hard to give it credence- at one point, Pablo is “incarcerated” in a prison of his own design, staffed by his own men, with a mini casino, football pitch and a bar. The police aren’t legally allowed within 2 miles of the place. Moura’s portrayal of Escobar is mesmeric. On the one hand, his Escobar comes across as as a slightly comedic figure, mustachioed, with a slight limp, and a very deadpan delivery, on the other, a violent psychopath who is capable of beating a man to death with a pool queue and not even blinking as the blood covers him. The two reconcile though, and that is down to the skill of Moura’s portrayal. A man who sends a little marble coffin with an RIP condolence about his son to a soldier tasked with capturing him, can also take massive affront when the military execute a child who is one of his look outs. A man who brutally executes anyone who stands in his way is still furious when he is not allowed to join the political establishment. It is a very nuanced performance.

It varies episode to episode but around two thirds of the dialogue is in Spanish with subtitles and again, it’s to the shows credit that you soon forget this and immerse yourself in the events. There is some dramatic license but the overall consensus out there appears to be that on the whole the story sticks pretty close to reality.

With news that Narcos has been commissioned for a third and fourth season, I’m chuffed as it’s been an absolute blast over the last month or so watching the first two series. It’s completely not the sort of thing I’d normally watch, but it’s been compulsive.

Next up is the Expanse, which isn’t a Netflix original but is an exclusive to Netflix. The only thing stopping me from watching that is the fact I’m only half way through the book at the moment!