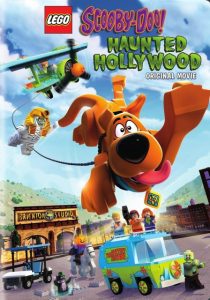 There are some great LEGO animations out there, we love the LEGO Justice League and Batman stuff, and the Ninjago cartoon but now, the two best world’s have collided. Now we have LEGO animation married to Scooby-Doo. Metaphorically, not literally. That should be obvious.

We were invited to a screening of the new Blue-Ray/DVD/digital download LEGO Scooby-Doo movie at Bricklive a couple of weeks ago. We loved it, and so did the traders who courted the LEGO obsessed 9 year old out of sixty quid of my money. I should be thankful that nobody on earth could have talked me out of the £400 that a trader wanted for the LEGO Death Star or the £5,000 someone wanted for the UCS Millennium Falcon. It was a great day out though, and that day was rounded off nicely by watching a movie before the drive home.

Lego Scooby-Doo! Haunted Hollywood has a runtime of 75 minutes, which is short for a movie but plenty long enough for a Scooby-Doo LEGO feature- with the Scooby gang, there is no need for introductions or character development, you can simply get straight on with the mystery and that’s more or less what they do.

I have to admit I was worried in the lead up to the movie that the essence of Scooby-Doo might be lost in translation because they LEGO animation style and humour is very set (my favourite all time LEGO character is DC’s the Flash, he’s hilarious) but thanks in part to Matthew Lillard voicing Shaggy (as he has done in pretty much everything since the first live action movie way back in 20020, there is enough continuity between the way the cartoon’s characters behave and the way they behave in the LEGO version (random aside, we re-watched Legally Blonde recently and were gobsmacked to spot the actress who played Velma in the 2002 movie had a cameo in it!) to make it easy to watch.

The plot follows the gang investigating the haunting of a once great horror studio by a load of ghosts and monsters from it’s popular movies of the past. It’s easy enough for the little ones to puzzle out who dunnit but it doesn’t spoil the story unfolding for either kids or adults. There are a few great set pieces, even if it does seem odd at first seeing Shaggy and Scooby making huge burgers out of LEGO.

The proof in the pudding was whether our two resident Scooby-Doo fantatics, Ned (4) and Fifi (7), enjoyed it or not. In short, I’d bought the HD version on Amazon Video before we’d left the auditorium and they’ve watched it half a dozen times since. The LEGO humour is dominant, as you would expect, but the character of the Scooby gang and the conventions of a Scooby-Doo mystery are all present and correct too, right down to the Mystery-Inc era running joke of Fred setting elaborate but rubbish traps.

Lego Scooby-Doo! Haunted Hollywood is out now and at the very aggressive price point it’s available at (sub £10 on all formats), it’s a worthy addition to any LEGO or Scooby-Doo fans collection.