Friday night was the inaugural plus one* instalment of the annual Vuelio Blog Awards. Once again I was one of the first to accept the invite when in landed in my inbox. I’m firmly of the belief that there is such a thing as a free lunch, or in this instance a free dinner, and I’m not shy about it.

One of the earliest friends we made through blogging, Jen Walshaw, who blogs at Mum in the Madhouse, couldn’t make the awards dinner and asked me to pick up the award for Best Mum Blog if she won it. She only went and won it!

I bloody only went and won! https://t.co/K8a9eGNjTm

If somebody had told me ten years ago I would make friends from something like blogging, I would have said they were bonkers. It turns out I would have been wrong. I’ve made many over the last 8 or 9 years, Jen among them. It was really an honour to be asked to go up on stage and collect her award for her.

The Vuelio Blog Awards are a little different from the majority of blog awards out there because they’re not a popularity contest. Popularity contests mean it’s seldom the best blog that wins, it’s the person that manages the best awards campaign. Vuelio do it differently though. Vuelio run a very comprehensive and often updated influencer database that was used to draw the shortlist for the awards. A panel of judges than sat down and looked at the shortlist and reviewed the entrants on merit. This panel included people like the editor in chief of The Drum, so it’s not a Mickey Mouse endeavour either.

It was a great evening, it was great to catch up with people I knew, people I knew but had never met, and people I didn’t know but was glad to meet, as well as the odd person I didn’t know and shall gladly continue happy in the knowledge I don’t know. The venue, The Brewery, was once again a great host for a splendid evening.

Although he didn’t win the overall award on top of the Dad Blog award, special praise should be given to John Adams, of Dadblog UK, who would have easily won the Award for Best Celebratory Photo for Winning an Award: 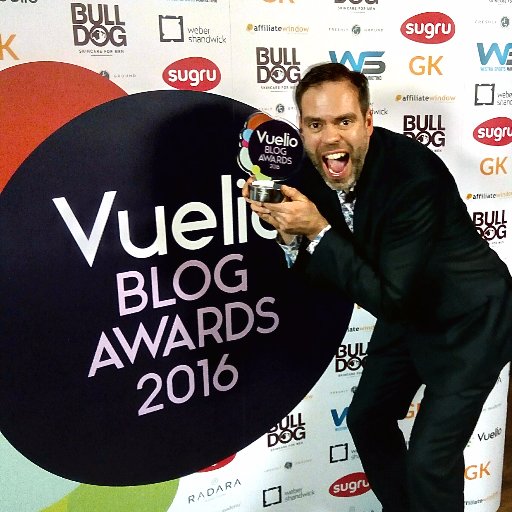 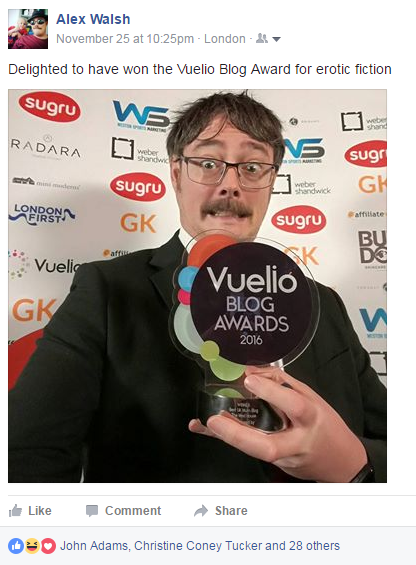 *that’s my way of saying second in case you hadn’t worked it out.