I know I’m getting old. It’s not just that my birth certificate stubbornly refuses to say anything other than 1975 as my year of birth, or the calendar keeps upping the year count by one with depressing regularity, no it’s more that I don’t understand stuff like Minecraft and it’s a bit alarming. I started playing computer games back in 1982 when I was 7 and I haven’t really stopped in the intervening 34 years. Yes, there have been spells where I’ve not kept up as much as I would have liked (93-96 was a bit of a fallow period, as was 2008-2013 as we had too many babies to spend time doing anything really) but by and large I am still a gamer.

But I simply don’t get Minecraft.

Oh, I understand that it’s like a virtual LEGO, and that ironically you can even buy Minecraft LEGO now, but I’ve spent many many hours bashing my head against a brickwall trying to set it up properly on the PC for my kids to play. All the *.jar stuff, the impenetrable installation of mods, that fact that every incremental version of the game won’t work with the majority of the mods, it drove me utterly up the wall. I’m no n00b when it comes to PCs either, I’ve built several from scratch, and I’ve built a homemade NAS box with a custom operating system on a compact flash card before.

Fortunately the very fact that Minecraft is ubiquitous now has counted in my favour as it’s now on Xbox One, and Microsoft, in their infinite wisdom, offered to send the kids an Xbox One S Minecraft bundle so they could finally teach me what the heck is going on with it all. 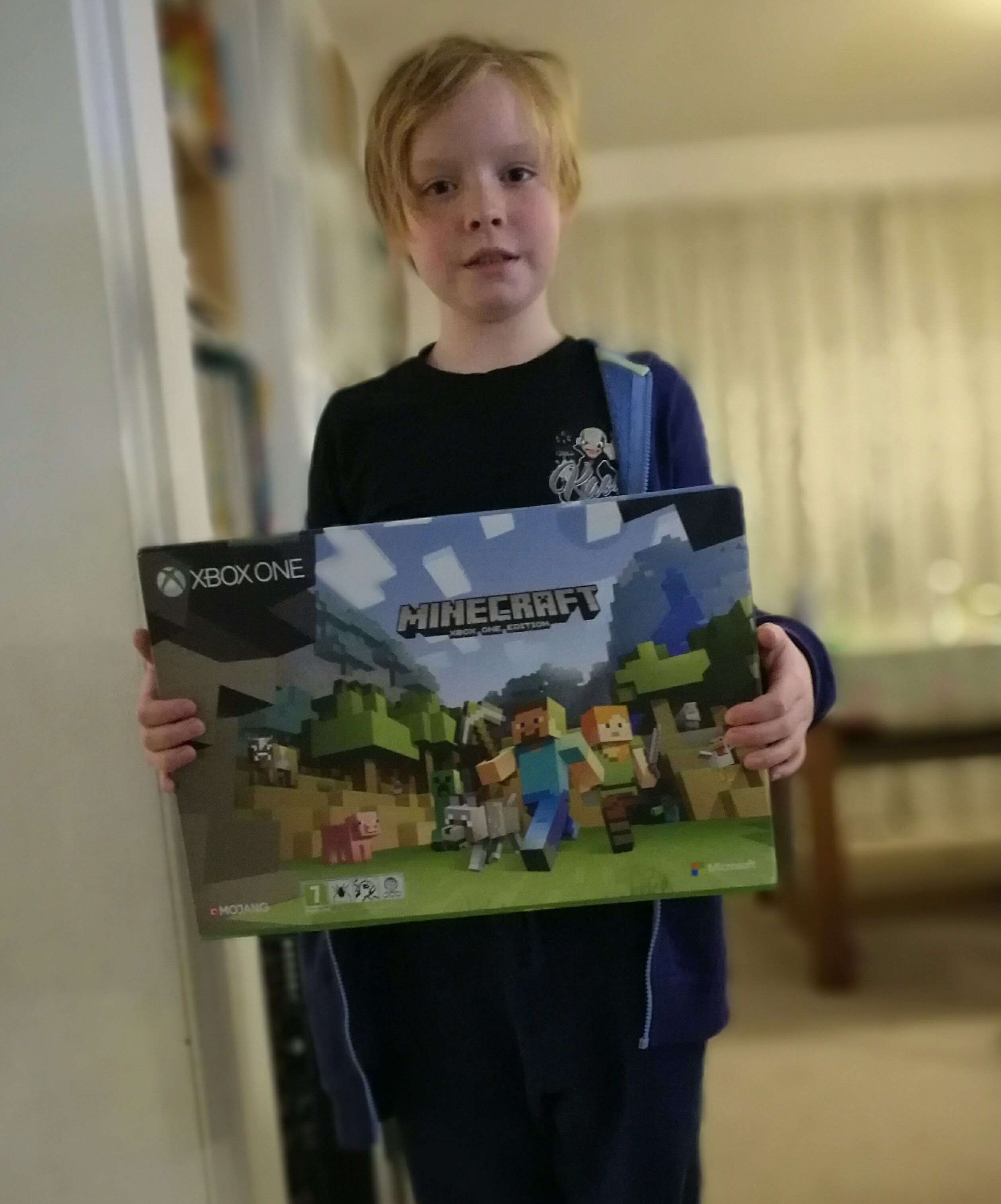 All three of my kids love Minecraft. Ned, who won’t be 5 until January, is the latest addict. He’s still on touchscreen controls, so most of his Minecrafting is done on his Amazon Fire Kids. But the level of manual dexterity and thought he puts in is flipping impressive. The older two have had to settle for PC up to now but thanks to MS, they’ve grasped the console nettle with both hands and are refusing to let go.

You might have heard of the Xbox One and be wondering what’s going on here, after all the Xbox One was originally released in November 2013 and Minecraft has been out on it since September 2014. What you might not know is the Xbox One S is a  major update to the console’s hardware, and has only been out for a couple of months.

The console is now smaller, has an internal power supply, has upgraded performance and importantly can run loads of cool stuff at 4K (it can even upscale games) if you have a 4K telly- it will even play the new UHD BluRay standard, something the new PS4 Pro can’t do for reasons that escape everyone outside of Sony. Physically it’s a lovely bit of kit, and it looks the business in white!

What’s even better though is the price, at launch the Xbox One was £429, now the new revised S model starts at an RRP of £249 with a game but you can pick them up for even less if you shop around. Consoles always tend to get cheaper as they become established because as the user base increases, licensing income from games increases for the manufacturer and subsequent hardware revisions make the consoles cheaper to make. But this is pretty much a first- a major hardware bump at a price almost £200 below the launch price!

Join us soon for Part II, where we get down and dirty with the Xbox One S and Minecraft, and the boy tries to teach me a thing or two about what is going on!