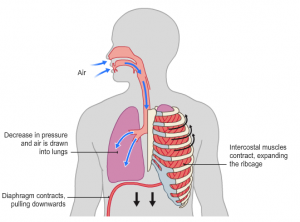 I was half awake in the middle of the night the other day when I started down a train of thought that I haven’t had in many years. It was of course a big mistake.

Initially I as I sucked air in through my nose, I thought, “Eh.This isn’t right. My nose feels like it’s sucking air in and out but it’s just a passage.”

I then had a moments blind panic about how I actually breathe. I was so asleep I couldn’t remember how the mechanism works. As panic woke me up a bit I remembered something about the diaphragm and other muscles and I calmed down a bit.

I was properly awake now though and as I lay there, I decided to concentrate really hard and see if I could feel my intercostal muscles tensing and relaxing to enable me to breathe. Nope, all I could feel was the air whistling in and out of my nose.

What if my whole breathing mechanism was broken? What if my nose was the only thing keeping me alive by somehow sucking air in and out? As I tried to focus on where the breathing was happening, it seemed like the only part of me that was vaguely interested was my nose. Oh God, I’m going to die, I thought glumly.

Always one to share such thoughts I asked Claire if she was awake. “Mmmm?” was her emphatic reply. Undaunted, I continued. “You known when you think about breathing, but you can’t actually feel the muscles that are doing it? Weird isn’t it?” I tentatively asked.

Five minutes later we were both lying there in bed, overthinking our breathing. Was I breathing too shallow now, hang on am I hyperventilating now? How long long should I hold a breath before I release it? Am I feeling light headed from oxygen deprivation or am I just tired?

Breathing is one of those things that you just do and it doesn’t work as well if you consciously think about what you’re doing.