If you’re a regular reader of mine, you might have noticed that I reviewed the Panasonic ALL05 a little while ago. The ALL09 is it’s bigger brother in a lot of ways. Physically it’s a lot larger, in terms of power output it’s also bigger, a whopping 80W against 20W for the smaller waterproof ALL05. 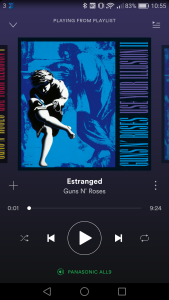 80W of power is plenty for the Panasonic ALL09 to completely fill a large room. Because it has plenty of ompf, there is no need to push the volume to the sort of excess that will cause distortion. Like the rest of the range, there is WiFi and Bluetooth direct connection to the smart speaker, either via the Panasonic app or Spotify Connect. It’s easy to use, and you get a very easy network play option too if you happen to have your 500+ CDs ripped to a NAS drive like I do (the CDs are all still in the loft, I can’t bear to part with them and I suppose that’s technically piracy if I still keep the rips).

While the ALL05 is waterproof and also has a 9 hour battery life on top of the mains power, the ALL09 also has a unique trick up it’s sleeve and that’s an AUX in.

This means you can hook it up to a CD player or an old fashioned MP3 player- I still have an ancient iRiver H140 knocking about that has 30 odd GB of FLAC (lossless audio) on it. Of course that means literally anything with an AUX output can get connected. Now, the Amazon Echo Dot has an AUX output and I thought this would be a really good chance to put the two together.

It’s great having Alexa speak at a volume that fills the house, and it’s also a lot better in terms of sound that the Echo proper. Of course giving the Echo voice instructions to stop the music when its loud enough to encompass our entire room is a bit too much of an ask but it’s great to sit and play a selection of tracks one at a time.

The Panasonic SC-ALL09 retails for around £300, which is considerably cheaper than a SONOS Play:5. We can’t compare the output directly because SONOS refuse to publish that sort of detail but the ALL09 sounds significantly louder (and better in terms of sound quality) than my Play:3, s0 I assume that the 5 is probably it’s more expensive equivalent.