We struggle to get any of our three kids to do much reading. I think it’s laziness on their part, although they do admittedly have slightly more distraction than we did growing up. Although we had computer games, which if you’ve ever looked at our retro gaming blog you’ll know all about, the telly available was much more limited.

I was always a voracious reader but also a demented writer too. I was the first person in our secondary school to submit typed essays (on the dot matrix printer Dad got for our Atari ST), and there was initially a bit of wrangling over whether that was acceptable. My Dad pointed out that if they were worried someone else had written it, I could simply have hand copied something that someone else had written anyway, which was a fair point. On top of that concerns about length, when a 450-500 word essay took 8 or 9 pages of some girls bubble writing but fitted on one side of printed paper, were just mad.

I was also a precocious reader, ploughing through the kids section at our local library and making the jump to adult fiction as soon as I started secondary school (if not in the final year of primary if I check the dates closely enough).

I started writing and gave up on my first book during my second year at secondary school. It was a sci fi comedy called Megagalatic Hippies and the Quest for the Cosmic Flares. I didn’t really know what a hippy was, outside some vague notions of Jeff Minter and Pink Floyd, and had an enthusiastic but untroubled by physics approach to cosmology. It didn’t matter really, I ran out of steam after a few thousand words. Fast forward 30 odd years and my “book” has run out of steam at 60,000 words as I can’t write an ending, let alone the ending. Some things never change.

Out of our kids, Fifi is the one who likes writing the most, be it in her diary, or just stories. The stories are often thinly veiled demands for a pet dog but inventive enough in their execution. I came down this morning and she was even attempting to write a limerick. She doesn’t like reading though and constantly gets excessively upset when we call her out on pretending to read books that she hasn’t. Personally I’d still rather read a book than watch a movie or a TV show but I guess that’s my age showing.

Still, rummaging around today I found my first appearance in a periodical. It was a video game magazine called ACE that ran for 4 and a half years from 1987 to 1992. ACE was better than some, it was multi format and reviewed games out of 1,000, with a longevity graph to show how long you’d likely play the game for. Those sort of things impressed an impressionable teenager! Still, it’s circulation around the time of my appearance in it was a little over 48,000 and consequently when I got the Star Letter and a game for my system, I was pretty chuffed. I was less chuffed when the worst rated game they ever reviewed on the MegaDrive landed on my doormat a couple of months later but it was an important lesson.

This is the letter that a 16 year old me wrote: 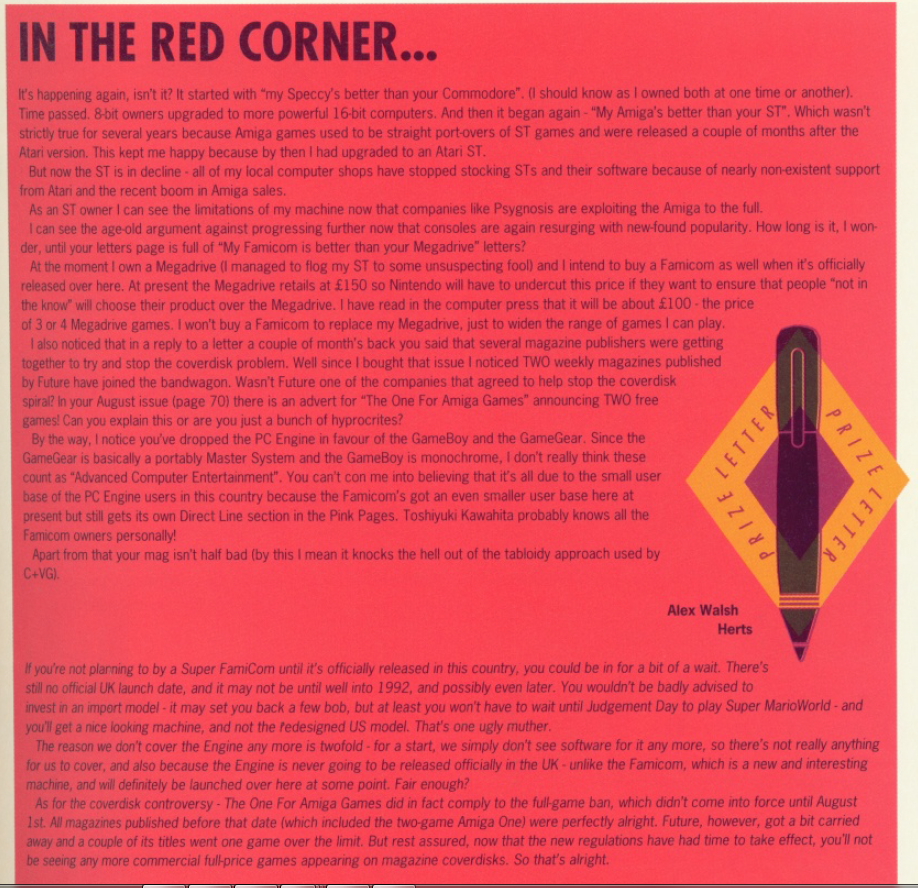 I was a pretentious little arse wasn’t I?