Growing up in the 1980’s, Just For Men ads were up there with good old Victor Kiam’s “I liked the shaver so much, I bought the company” line in electric razor adverts. For my generation, a well chiselled, grey haired, Pierce Brosnan  look a like badly acting his way to better hair was the stuff of most Saturday tea time ad breaks. Well guess what? Just like razors have had a bit of a make over and aren’t quite as cheesy as Victor made them, so has Just For Men. In fact they’ve got a new product which they asked me to try out. While their old adverts pointed out that not having grey hair would let you get a better paid job and send your kid to college, we’re not in the 80’s now and things are a lot more sensible. I’m not sensible but I thought I would take them up on the challenge to see if it changed my perceptions (and my hair).

Just For Men Control GX simply aims to gradually reduce grey hair through use over a period of several weeks. When Just For Men emailed me and asked if I wanted to give it a spin, I have to admit I was mostly driven to say yes by a sense of nostalgia and how I would be able to have a chuckle with my work colleagues. It turns out I was more than a little wrong though, as a month later, even my five year old has noticed the reduction in grey hair! 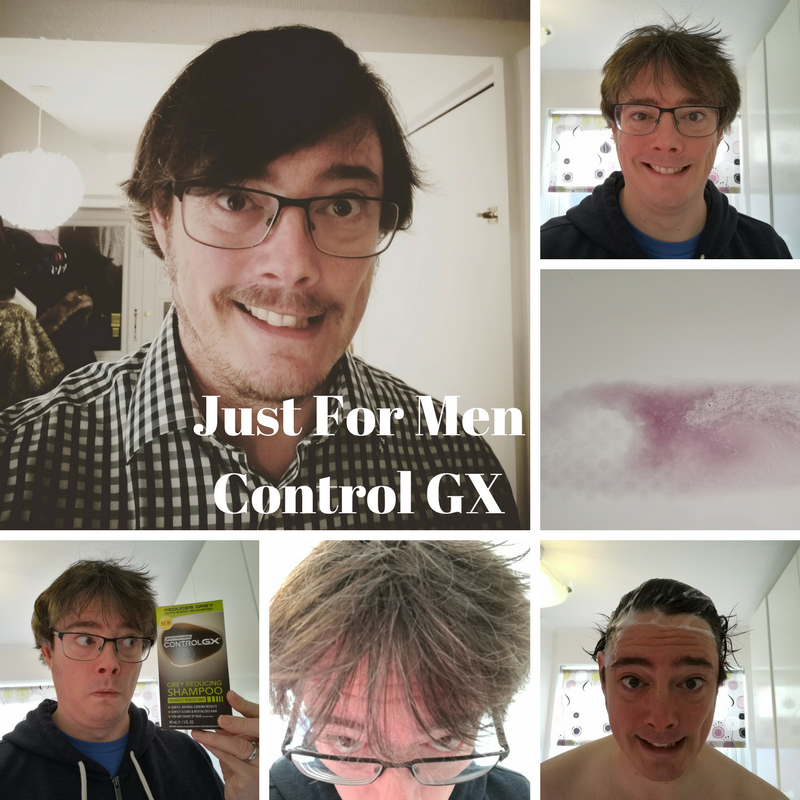 I’m lucky in that at the ripe old age of 42 I still have very thick hair and a hairline exactly where it was when I was in my 20’s. Of course this means that three kids and life have provided more than ample opportunity for the mass of locks I have to have plenty of grey in there. It’s part of the reason my hair is so long, I get more than a little depressed when my locks are shorn at the amount of grey that falls down.

After the first couple of washes (it is a normal shampoo too, and you can get one that’s also a shampoo & conditioner), I didn’t see an immediate difference but I suppose that’s the point really. If I wanted it to look like I was wearing a dishevelled wig, I could just go and buy some more traditional hair dye.

I’ve been using Just For Men Control GX since the Christmas holidays (alternately with Nizarol as my scalp is what I like to refer to as “manky evil”) and the change has been subtle and gradual. The bottom centre photo above shows that there was a lot of grey/white in my fringe and round the sides. That’s pretty much gone now as you can see in the main photo but my hair isn’t a uniform colour, there are still lighter patches and texture.

I’m happy with the result and more importantly nobody has laughed at me because it’s been so gradual. It’s a bit like taking moderate exercise, you end up losing weight and people don’t notice unless they haven’t seen you in ages.

Just for Men Control GX is available in most high street stores where you’d buy shampoo and stuff. It comes in a funky box that’s nothing to be ashamed of and retails for £8.69 a bottle (with or without conditioner).