When Philips asked me if I’d like to take part in their healthier snack swap challenge by getting the kids to substitute an unhealthy snack with something whipped up in their Centrifugal Juicer I almost said no outright because everybody knows fruit juice isn’t as good as eating the fruit itself- most of the fibre gets lost, which just leaves you with sugary flavoured water. Yes, it’s fructose, not sucrose, but sugar is sugar. But, they countered, there’s a button that lets you increase the fibre content, so you can have your apple and drink it.

In the end my love of gadgets and the possibility of making after hour cocktails in the thing won me over and I graciously agreed to have one. I’m good like that. Philips, bless them, went one better and sent a supermarket voucher with the Centrifugal Juicer so we could stock up with ingredients. 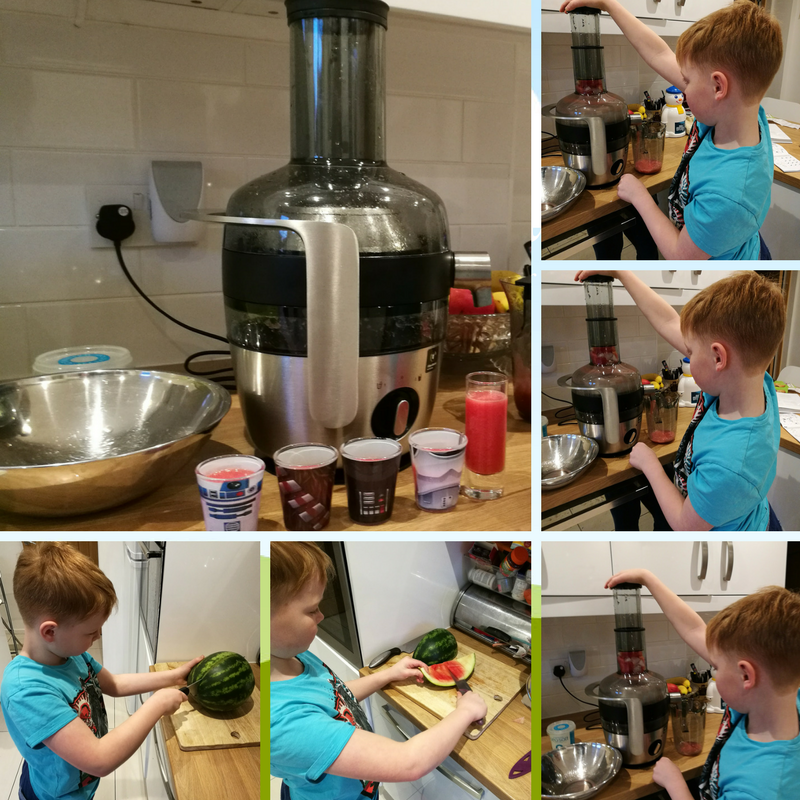 It just so happens my wife is currently working her way through Fearne Cotton’s Eat Happy, Eat Healthy cookbook and it has a whole section on drinks. Thankfully the drinks section doesn’t have a picture of Fearne, as some of the other pictures of her in the book look like she’s being forced to bake at gunpoint and if she stops smiling for even a second, they’ll punish her. Perhaps she doesn’t even like cooking but someone offered her a book deal and she needed the cash? Who knows. The end results are good but the recipes aren’t brilliantly written. Anyway, the drinks section is good and so we set out to purchase stuff like chia seeds and milled linseed, as well as watermelons and apples, pears and spinach.

If you’re a regular reader of the blog, you know we like to make sure there is a connect between our kids and the food they eat. We let them help out when we have time preparing meals and we like to try and make everything from scratch, whether it’s chicken pies or even, quite literally eggs! Hence you shouldn’t be too surprised to see our 9 year old cutting up a watermelon, under strict adult supervision. I think the closer the connect to their food, the more likely kids are to eat what is put in front of them (especially if they put it there themselves), so an obvious extension of this is making their own juices.

The Philips Centrifugal Juicer is constructed in such a way that it’s not possible for little fingers to get cut off. This is good. The locking handle does require a bit of force to lock into place, so kids might need some help with that but generally, as well as making great smoothies, the Philips Centrifugal Juicer is also great for kids to use. All of the parts likely to get gunged up are also dishwasher safe, which is another bonus, and it has enough weight to it that it’s unlikely to get knocked over by accident.

We don’t as a family buy drinks for the kids- they drink tap water for the most part. Concentrates either have added sugar or sweeteners (most of which are a mild laxative) and the same goes for a lot of fruit juice. I’ve always been of the opinion that I’d rather have my kids eat fruit than drink it but given the Philips Centrifugal Juicer leaves so much of the fibre in and can be used by the kids, I’m willing to make an exception going forwards. The kids love it, and teaching them to follow the recipes (there is also a recipe booklet included) is educational too.

The Philips Centrifugal Juicer is available now, with an RRP of £220.