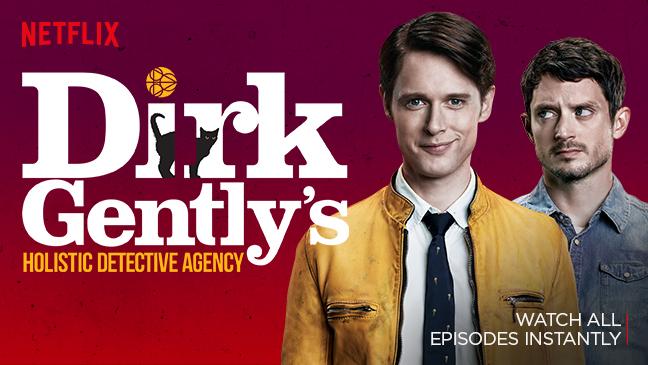 While the kids have been enjoying the Netflix original Middle School, I’ve been working my way through another Netflix Original (in association with BBC America), Dirk Gently’s Holistic Detective Agency.

On the face of it Dirk Gently’s should be terrible. The Douglas Adams books are ace, the BBC adaptation with Stephen Mangan was good, if not stellar, keeping within a 100 miles or so of the source material but shifting the whole thing to America, introducing loads of other characters, a CIA undercover programme and my fourth favourite Hobbit, Elijah Wood, as the new sidekick, takes it a million miles away from the books and should be a recipe for disaster.

It isn’t though, it’s brilliant, and Netflix have done it again. The title credits say “based upon” Dirk Gently’s Holistic Detective Agency but a better phrase would be “loosely inspired by” as it’s a million miles from the books in terms of who Dirk is and what is going on but the very Douglas Adamsy attitude is definitely there in the background, linking things together.

Rather than a fat older chap, Dirk is now a young and seemingly (emotionally) naive Brit, played with verve by Samuel Barnett. His visual motif is brightly coloured yellow jackets, another thing that takes us away from the shabby gumshoe look of the book. He’s not quite as likeable as Stephen Mangan’s portrayal but that’s mostly due to the hyper-kinetic pace that events unfold at (I think).

Dirk’s world is full of fundamentally strange people- there’s Bart, a holistic assassin, the Rowdy 3, a load of body swapping bald people, a weaponised soul hidden in a kitten, and the list goes on. It’s a lot stranger than the books, which take the premise of odd things rather than odd people but it works, in fitting with my inspired by thoughts I mentioned earlier.

A second series has been commissioned, which is good as the first ends on a doozy of a cliff hanger.