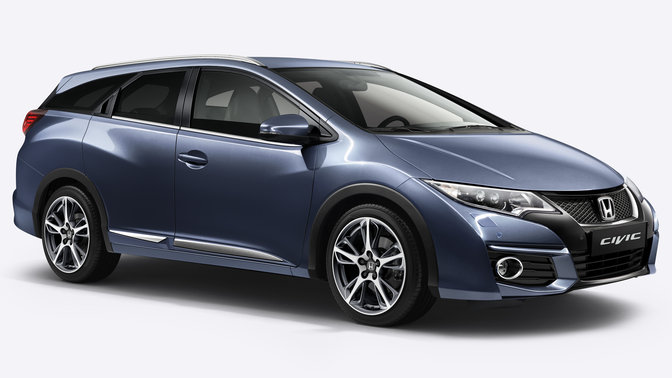 I’ve had my Civic Tourer three months now, so when I read this review in the Guardian was a highly entertaining read! The Guardian is, in my humble opinion, almost completely wrong in it’s assessment of the car. Although I’m writing a review of the Civic Tourer, I’d like to make it clear that this isn’t facilitated in any way by Honda, they’re involvement only went as far as building the thing.

Our old family car was given a few months to live. It was a 53 plate 1.6 Vauxhall Zafira that we bought with 31,000 miles on the clock, added a further 67,000 miles to and were told that the crankshaft needed replacing, which given the age of the car, probably wasn’t worthwhile.

Emboldened by the new company car scheme I was eligible for at work, I began looking in both haste and obsessive detail. I started off at Next Green Car, reviewing family cars with less than 100 CO2s, and went on from there, adding a couple of other cars to my long list. My long list comprised:

*both included by the leasing company as a comparison. Neither would have been my choice.

Given my size, and the plethora of kids we have, sitting in the cars was an important first port of call. The Volvo V40 was too small, the Kdjar and the Sportage didn’t seem as premium as the others. The Golf’s boot was too small, the SV would have been better but no availability locally to even test drive it meant I ruled it out early on. The Yeti was great, but didn’t have a very big boot, which left me with the V60 and the Civic.

After a lot of research, I went for the Honda Civic 1.6 DTEC, in the most basic S trim- on the road price of £20,250. This is a lower trim level than the hatchback comes in so consequently it’s bizarrely cheaper by around £1,500 over the base hatchback model. All prices are RRP, and do not represent what you can get them for, it’s a price for tax purposes. It’s a company car, so the low CO2 (99), and the good residuals make it exceptionally cheap to have, and it’s pretty quick for what it is, especially up to 40mph.

Things have changed now with the new punitive treatment of diesels but I was okay and the petrol version is just as good.

A 0-60 of a smidge over ten seconds isn’t slow and the idea given in the Guardian that a car with a top speed of 130mph is incapable of overtaking anything on a dual carriageway is properly baffling. At 70mph in 6th, the engine is cruising at 2,000rpm, and if you put your foot down to overtake, there is a decent response.

I think motoring journalists generally do a disservice to cars with a perfectly adequate power output (120PS is more than reasonable in this instance) because everything has to sub 10 seconds to 60 and more power! power! power! now. It filters into the public consciousness too. I had several people attempt to convince me that a 100bhp 1.6l Zafira was actually dangerous to take on a motorway as it would be almost impossible to accelerate to 70mph because the slip road might have a gradient or be too short.

The problem is that’s rubbish. The first two cars I drove, an old C reg Nova, and an R reg (1997) Polo had 100bhp between them and both clocked up plenty of motorway miles without a near death experience every time I joined a motorway or dual carriageway and the same happened with our Zafira. In fact in over 200,000 miles of motoring, I can only recall having an issue with the power available once, and that was when I was in the wrong gear going over Snake Pass in my Nova with 4 big lads as passengers in the car :)

One part of the Guardian review that stood out was the plaintive cry of “what went wrong with my life, that I constantly need to take large things from one place to another?”; that genuinely made me laugh. Going anywhere more than over night with 3 kids invariably fills the boot of anything smaller- we’ve gone on holiday in the UK with a Focus (tiny boot), a Zafira (318 litres IIRC) and a Rav4. In every instance, we’ve had crud in the foot-wells. Given the Tourer is about 20cm longer than the hatch, it’s not exactly a compromise either, although I’d admit the hatchback has a class leading boot.

There is lots to like, the Bluetooth audio, the secondary hidden boot compartment, the retractable parcel shelf and the good all round visibility stand out, as does the ability to lock the electric windows to stop the kids playing with them. On the downside, I miss the electric heated windscreen that the Focus has, and if I was being ultra critical, the middle seat in the back isn’t really designed for full time use, but with a kids seat on it, it’s okay.

I’ve long been of the opinion that a smaller “estate”, or tourer as they seem to have been rebadged now, is a much more practical family car than some of these SUVs I see struggling to park in multi-storey car parks, or getting in to trouble down country lanes. They tend to have small boots, a concession to making them compact enough to fit in regular parking bays. Only my opinion but I’m happy with it.