Oh for a rounded world view.

The problem with ideology is that it becomes a means to an end. In the Large Hadron Collider of Life, when ideology and social interaction are hurled together at a high percentage of the speed of light, it is often the case that individual ideologues involved get so caught up in their narrative that common sense has to take a back seat.

Whether this is manifest as the devout Christian spreading what he thinks is God’s word by shambling up and down the high street with a sinners repent sandwich board and a portable megaphone, the Gamer Gate “ethics in journalism” lot automatically assuming that any woman involved in video games is there because of sexual favours offered to men, or the feminist who’s default position is any man is a woman beater, the thing they all have in common is the damage they do to their cause by their actions and behaviour.

As a parent blogger, I happen to have a search column on Hootsuite that keeps track of the phrase daddy blogger and it turned this gem up this morning: 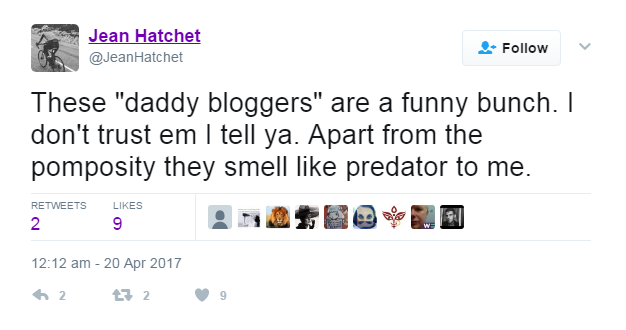 Never one to idly be called a predator (but more than happy to be called pompous) without responding, I RT’d it as follows:- 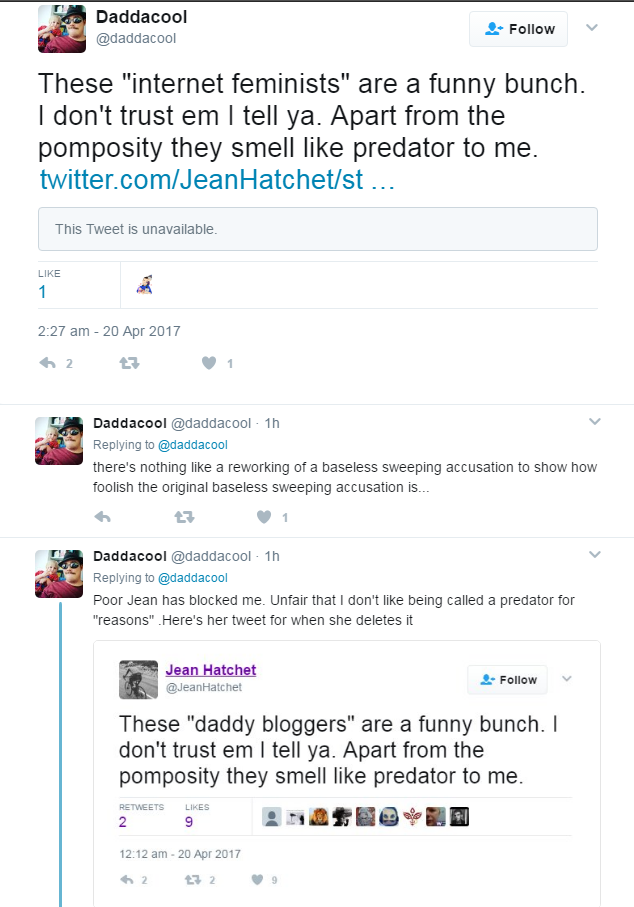 See what I did there? I was pleased with myself by pointing out the patent absurdity of the statement- you could replace “daddy blogger” with pretty much anything and it would sound equally as absurd. I was blocked immediately with no engagement but people who block other people on twitter don’t tend to realise that it’s relatively easy to view what they’re tweeting via an incognito window and so I continued to see what further revelations would issue forth.

Jean cannot see that her behaviour might have been the trigger for the responses she received to this and other tweets. Which is unfortunate but not surprising when you get wrapped in a ideologically driven world view. People taking offence at being called predators were suddenly on a patriarchal ego trip: 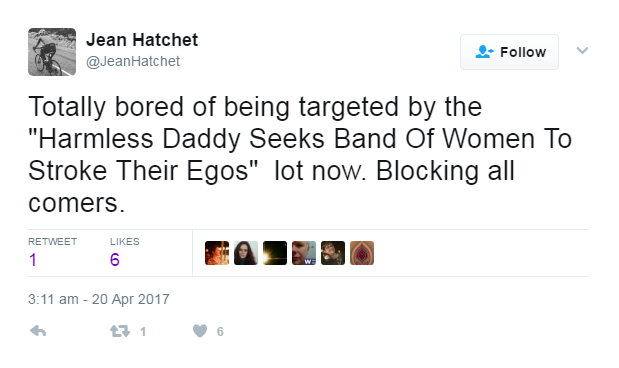 Luckily for the unsuspecting world at large, Jean was able to take the behaviour and responses to her slur as confirmation of our crimes because it’s much more reasonable to assume that people take offence at being called predators because they’ve been caught out predating than, you know, because it’s an unfounded generalisation aimed at a bunch of people you don’t know: 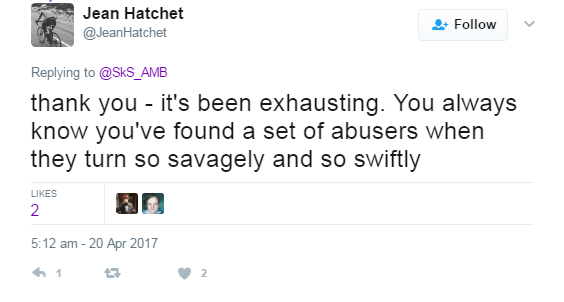 After a bit of digging, I found the exchange that had triggered her outburst at smelly predator dad bloggers like me (I had a shower last night thanks) and it went like this:- 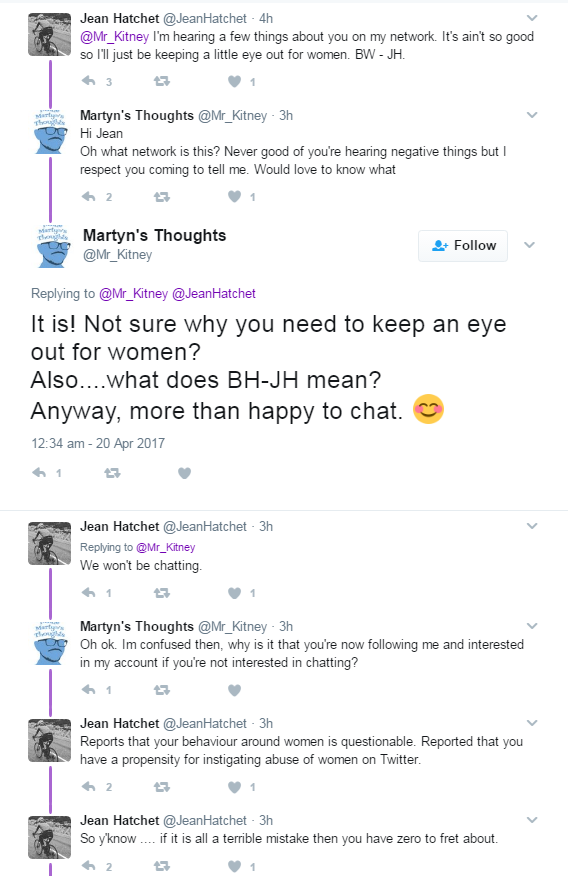 This is where the fundamentalist with the “Sinners Repent” sandwich board metaphor comes into it’s own. Basically you don’t know me, I don’t want to talk to you but I’ve heard you’re scum to women and I’m watching you. Reverse the gender situation and that’s creepy as hell. Keep the gender situation as is and it’s still pretty creepy. Not everyone wants their own pet stalker. I also like the final comment, which lets face it, is a threat.

There are plenty of strong female role models out there, I’m married to one, and am fortunate enough to know many others, mostly by dint of knowing people who work in the cultural sector who are well read. Individuals who hijack a cause or blindly pursue a course of action so convinced by their own righteousness that they cannot see the problems they are responsible for are a problem on top of the problem they think they are trying to deal with.