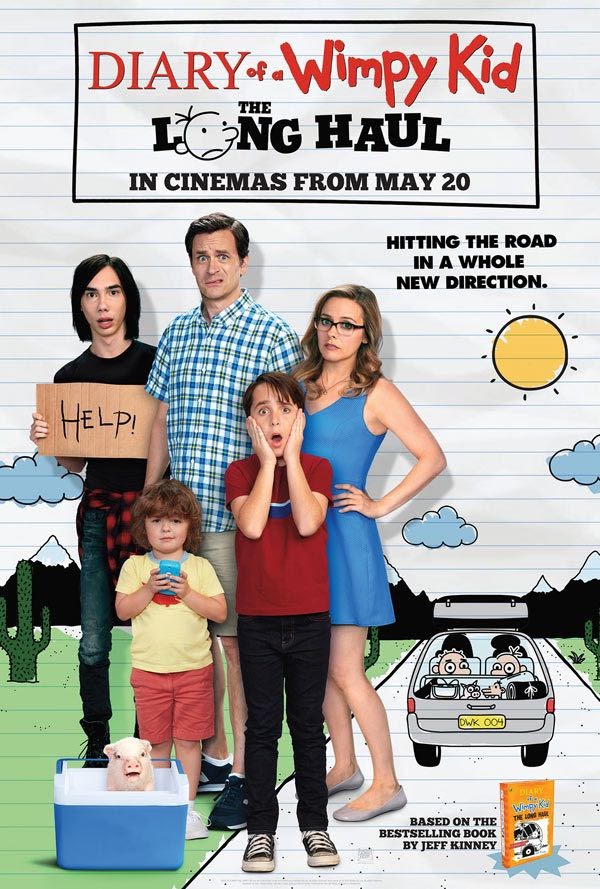 The original three Wimpy Kid movies are firm favourites in our house, so the news of a belated fourth (I won’t call it a reboot, it’s just a new film with a different cast; the original kids all probably have hipster beards now) movie was met with a mixture of glee and trepidation in our house.

Glee, because Wimpy Kid books and movies and fun, trepidation because we don’t like change, and a whole new cast is a lot to handle.

Fortunately from the moment we sat down in the cinema, looking at the movie poster up on the screen, we knew we were in safe hands. The Heffley’s car even had the license plate DWK 04- a nod to the fact there had been three previous Diary of a Wimpy Kid movies and this was the fourth.

If you’re reading a review of the new Diary of a Wimpy Kid movie, I’m going to assume you’re at least aware of the book phenomenon. The Long Haul deviates a lot from the premise of the other movies by taking to the road for a road trip to visit MeeMaw (granny), so aside from a very brief Rowley cameo, there are none of the usual gang from the books other than the Heffley family. Whilst this undoubtedly a shame, it does mean that the movie doesn’t have to spend time at the expense of the movies pace introducing us to an enlarged ensemble cast, so I can see the logic of it.

The boys immediate post movie critique was the whole water park sequence from the book was missing but other than that he enjoyed it a lot. The other kids loved it too.

The casting is pretty good too. Greg and his big brother Rodrick are well cast and it’s nice to see Alicia Silverstone back on the big screen- the last film I saw her in was probably Scooby Doo 2, Monsters Unleashed- even if she doesn’t really work 100% as the mum. Maybe it’s because I’m two years older than her.

As is de rigueur now, there are plenty of jokes that work very well for adults, as well as having the kids in stitches. Maybe I read too much in to the exploding cinnamon roll tube but I thought that was exceptionally rude(!), not that the kids got the joke past the slapstick of it.

The running feud with the “beardo” family on the roadtrip gives the majority of the opportunity for laughs, and if the idea of a technology free road trip is a little trite, it is at least something we as parents can empathise with completely. There are more scatological gags than you see in one of those 15 rated bro-comedies, and that cannot help but be a good thing in my book.

Live action kids movies are becoming rarer as everything has gone CGI but Diary of a Wimpy Kid: The Long Haul is worth a punt this half term if your kids haven’t read the books and is pretty much essential if they have. It’s out tomorrow, 26th May, nation wide