SMA Baby Club asked me to share my imperfectly perfect Fathers Day and I’m only too happy to do so. With three kid (10, 8 and 5), I get plenty of opportunity to “father”, and plenty of experiences of being on the receiving end of children!

I’m always the one up with the birds. It usually either involves me going to work early, or getting up (twice a week) to corral the three kids into the school run. My weekend lie ins are ruined by taking our eldest to extra lessons on a Saturday morning and dragging all three of the little darlings to their swimming lessons on a Sunday. 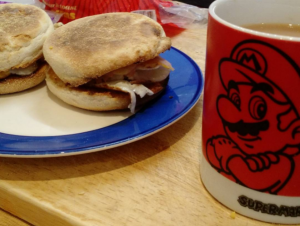 The sort of breakfast I’d like for Fathers Day

I never get a lie in, so once a year I have this idealised notion that the morning that Father’s Day dawns, I’ll get to have a nice lie in and and wake up naturally as the sunlight finds its way through the chinks in the curtain and plays gently over my face, the motes of dust dancing in the light. As I stretch and wake up from a long restful slumber, my angelic children present me with a freshly made cup of tea and a still warm bacon sandwich (buttered bread, with sauce, two thirds ketchup, one third brown sauce).

As I sit there munching on bacon sarnies, the kids line up respectfully to tell me how great I am and present me with home made presents and cards they’ve crafted with all the love and care that a doting child can manage. 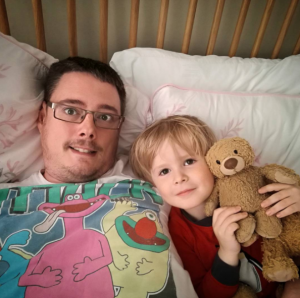 He can show affection by jumping on me

The reality of course is somewhat different. A few years ago when my littlest wasn’t quite two years old and was still the cutest baby in the entire world, the boy (7 at the time), decided to cook an entire packet of bacon for my Father’s Day breakfast. It was a bumper pack of bacon, containing 8 rashers instead of the usual 6, not that it made any difference to me though. My sandwich, with his vegetable spread (not butter), and no sauce, contained one limp over cooked piece of bacon as he had 5 rashers and gave his little brother the remaining 2. As Ned was still really young, he chewed the bacon enthusiastically for a while and then gave up and spat it out. My cup of far too milky tea ended up mostly over my chests the nearly 2 year old jumped on to my lap as I was attempting to drink it. Then a fight broke out between the kids over who would give me my present first, who made the best card and who I loved the most. I had to go and hide in the bathroom for about half an hour until it all calmed down.

Still, although it may seem chaotic, it is the sort of memory that will stay with me. All my kids love me so much that they’re willing to trade blows over it, and that sort of devotion (even if it does include a decided lack of bacon) shows that they love me and that I love them too.

This is an advertorial feature for the SMA ® Baby Club. Hope you’ve enjoyed reading it as much as I’ve enjoyed writing it.