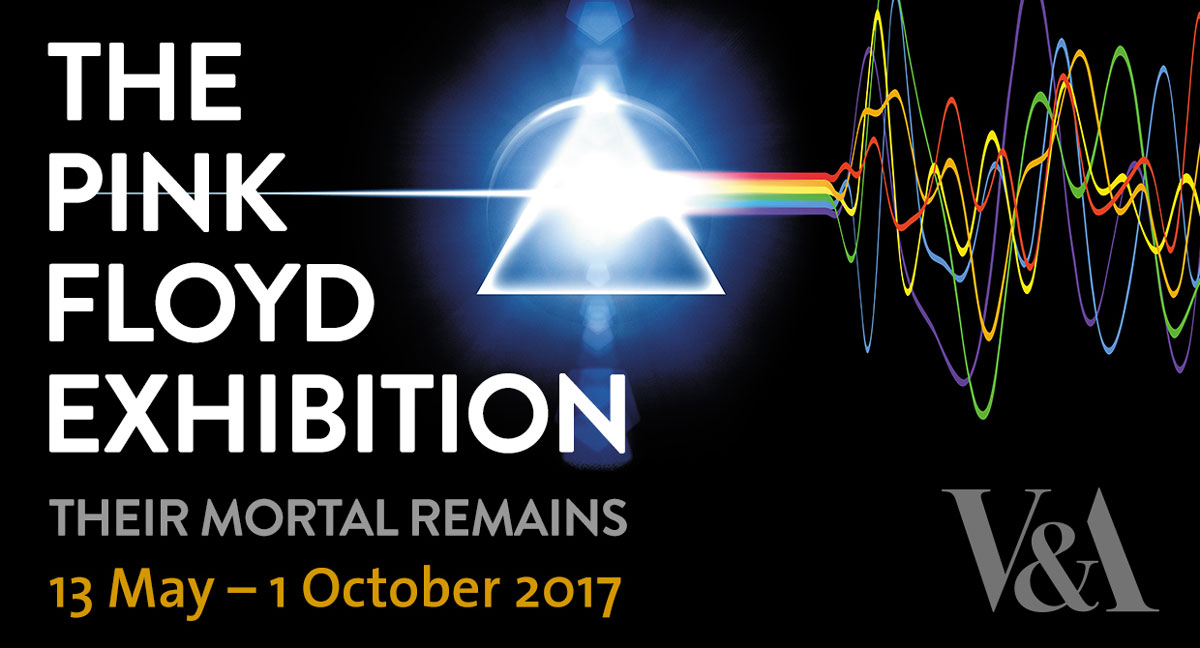 On Saturday morning I found myself sitting on a train on my way to the V&A for an exhibition entitled Their Mortal Remains. It isthe first significant retrospective of Pink Floyd and their work that a museum has undertaken and as a die in the wool fan for over twenty years, I would have kicked myself if I’d missed it.

As I rode the Thameslink service into Blackfriars I listened to Dark Side of the Moon and Wish You Were Here on my headphones, filled with a mixture of nostalgia and melancholia. I still listen to both albums regularly; probably more than anything else I’ve heard in the years since I weighed up spending my hard earned cash on an album with only 5 songs on it.

Pink Floyd bring memories back to me of my time at university in the early to mid 90’s. Of having a C90 cassette with Dark Side on the A side and Wish You Were Here on the B; of turning the volume up on my JVC microsystem to full and blasting the Wall out when I felt despondent; of introducing a shedload of lift shares to the wonder of the Great Gig in the Sky in my knackered old Vauxhall Nova.

In 1993 Dark Side of the Moon was 20 years old; as I write this today, that’s the same age of OK Computer, The Fat of the Land or Dig Your Own Hole are now. That’s pretty frightening if you dwell too long on it.

I was at university when Pink Floyd released the Division Bell. It was a better album than A Momentary Lapse of Reason but hasn’t aged terribly well; the production sounds excessively 1990’s, perhaps understandibly, and the older I get, the more I begin to see Roger Water’s point of view that the band was over when he decided to leave. Back in the day we called him “Grumpy Rog”, but now, especially in light of his new solo album, Is This The Life We Really Want, I’m coming to the conclusion that his bass lines and lyrics were more essentially Pink Floyd than Gilmour’s wonderful guitar work.

Fast forward to now, and Wish You Were Here was the album I reflexively put on when I found out my mum had cancer last year. The circle of Floyd is complete.

When I inherited a 1970’s mid/high end HiFi earlier this year, the first vinyl I went out and bought was an early press of Dark Side of the Moon. I think there is something engaging with having to take a record out of it’s sleeve and put it in a record player, especially in this day and age when I can simply say, “Okay Alexa, play me some songs by Pink Floyd.” Music shouldn’t just be something we have on in the background, great music is something that should be listened to in it’s own right.

The exhibition itself has some of the failings of a lot of blockbuster exhibitions; the crowd flow is particularly poorly managed with the first third of the exhibition space containing perhaps two thirds of the objects and panels. This lead to me spending ten minutes inching along one of the first display cases, pitching backwards and forwards between two audio streams on the headset that provides audio for the oft used video screens. If the crowding at the start of the exhibition occurred despite timed entry, I shudder to think what it would have been like otherwise. In many ways, Pink Floyd up to and including 1971’s Meddle and 72’s Pompeii gig is the most interesting era for the band. The Syd and immediate post Syd years are full of a band experimenting with their sound. The evolution from psychedelic pop into Atom Heart Mother and Meddle, an album which informs an awful lot of what came afterwards wasn’t given as much detail as I would have liked, particularly Meddle itself, which seemed to make do with a solitary display case. 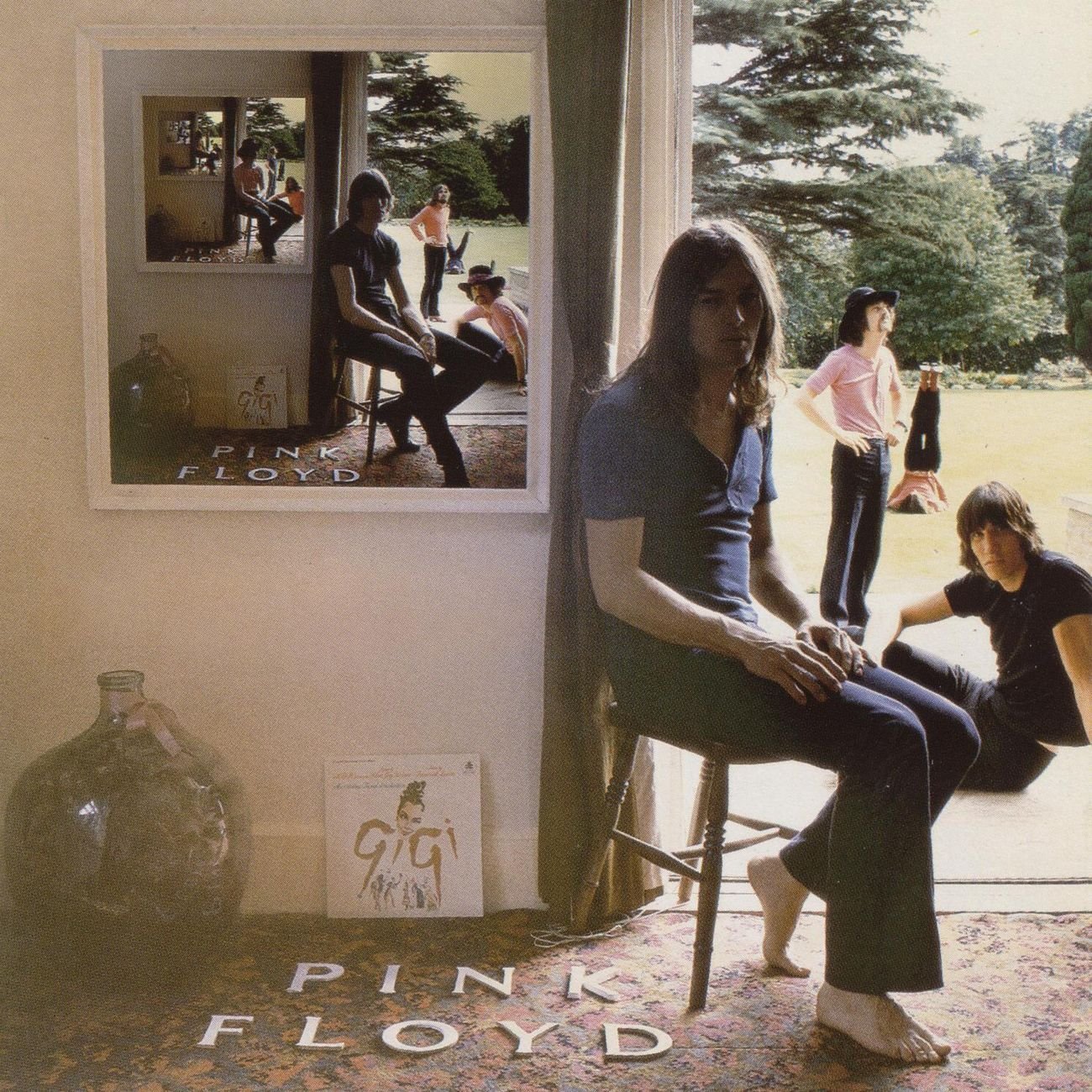 It was good to see the rather icon Droste effect from Ummagumma blown up and taking up an entire section of wall.

As the exhibition progressed chronologically there was an obvious absence of documentation of the tensions that led to the eventually split; perhaps an occasional allusion to being difficult from Roger, a careful word from Dave, who is obviously desperate for a full blown reunion (much like poor old Jimmy Page just wants Robert Plant to give up on the world music and play some Led Zeppelin together).

It’s understandable perhaps that the acrimony was absent; this is after all an exhibition celebrating the best in the band.

Visually, the work of Hipgnosis and Storm Thorgerson was very well represented, both in terms of pieces of art and interview. The bit where he matter of factly said there was no easy short cut for making the album cover of Wish You Were Here of a man shaking hands whilst on fire other than repeatedly setting someone on fire was done with such droll understatement, it made me chuckle. 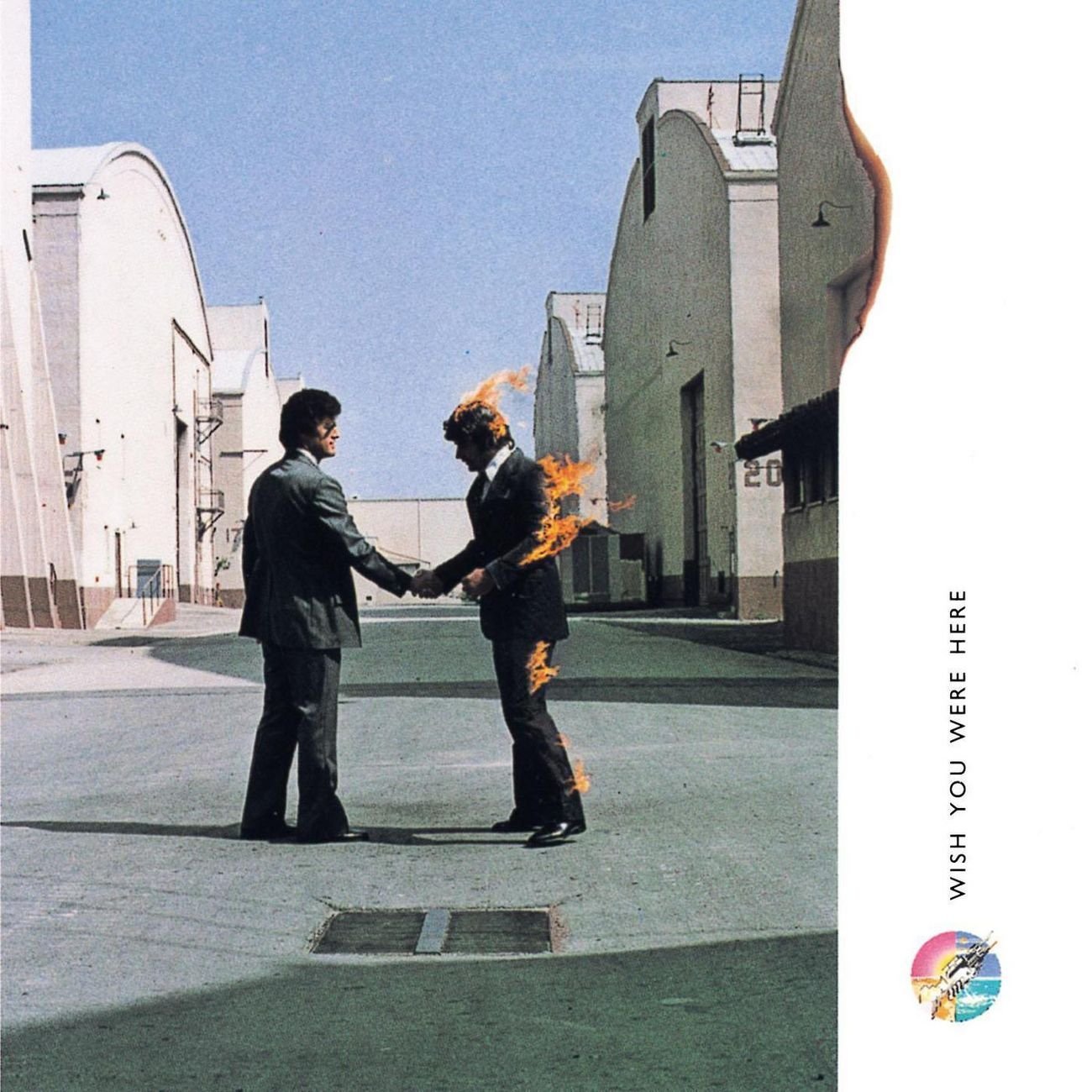 I may be wrong and I would have to check the beautifully made catalogue to be sure, but I don’t think there was anything about the Final Cut in the exhibition. I would have been happy if they had drawn a line at the Wall to be honest; although it was really rather excellent to see the light bulb suit from Delicate Sound of Thunder, one of the beds from Momentary Lapse of Reason and the full size metallic heads from the Division Bell, the Endless River was lost on me to be honest. It had taken me a good two and a half hours to get that far and an album of material that wasn’t good enough for the Division Bell should have been treated in a similar fashion to an album of stuff that wasn’t good enough for the Wall.

One of the highlights, in the Dark Side of the Moon area, were the mixing desks where you could muck around with the mix for Money, fading different instruments in and out. If you weren’t already aware of just how much this song is driven by Roger’s bass, a quick slide of the levels revealed it pretty spectacularly.

As well as a lot of interviews about making the music, there were an awful lot of instruments and synths on display. This contrasted markedly with all the inflatables and models that characterised the Animals and Wall section of the show.

The exhibition runs until 1 October, tickets are £26 a pop, don’t take the kids, they won’t appreciate it, and make sure you book in advance. As to whether you should go, if you’re a Floyd head obviously you should, if you’re not but have an interest in music, weigh up the rather steep asking price before you make your decision.

*I still sometimes wake up in the middle of night in a panic about getting an essay handed in on time. Or missing an exam by oversleeping. The last time I did an exam was in 2000.