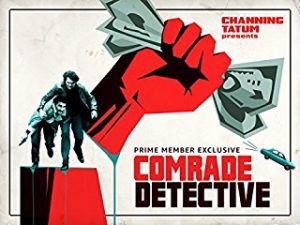 A real sense of mourning existed in our house on Sunday evening. We had finally finished watching all seven series of Parks & Recreation and we were at a loose end. My suggestion of re-watching it from the beginning was met with icy , so we had to look for something else. It took us around 3 months to work our way through the 125 episodes and it was a joy.

I happened to spot Nick Offerman’s name attached to another show, Comrade Detective, so thought we should give that a go. Nick Offerman played the rather awesome Ron Swanson in Parks & Recreation, a personal favourite of mine (and probably most blokes if I’m to be honest), so it was a no brainer to give this show with him in a go.

So yes, we went into Comrade Detective with no prior knowledge or understanding of the show!

Comrade Detective is a comedy show that spoofs/satirises propaganda TV. It’s set in 80’s communist era Romania, shot in Romanian, using Romanian actors, and then over dubbed (badly) by American voice actors. This gives it the genuine feel of an 80’s TV show, where subtitles were considered weird and dubbing ruled the roost.

The script is terrible, in a knowing sort of way, giving some really great laughs in the first couple of episodes. Some of the propaganda messages are so hamfisted, it’s hard to imagine that they’re pretty spot on until you remember watching Red Dawn or any of the other 80’s anti communist movies.

In case you’re worried whether this is a one joke premise, the series doesn’t overstay it’s welcome, weighing in at 6 episodes. The story follows maverick detective, Anghel, who flouts his chefs direct orders and attempts a drug bust in which his partner is killed. Unravelling the murder leads to a plot by the Americans to destabilise Romanian with capitalism and religion. In typical 80’s buddy cop fashion, he’s paired with a partner who he clashes with (and also looks a lot like Borat), leading to various scrapes and the like.

It’s good fun and at six episodes doesn’t outstay it’s welcome or let the joke run on too long. Reading about the genesis of the show, the producers toyed with the idea of re-dubbing an actual existing Romanian show but decided against it as securing the rights would have been too tricky. So yes, it was initially disappointing to see (or rather not to see) that my new hero Nick Offerman didn’t appear in the flesh but over all it’s a blooming good laugh and worth a watch.