I’ve done the hospital run with a wife in labour three times in my life and on the final occasion, when I got chucked out of the hospital, I had a rather madcap journey back to it too.

So when Kia invited me to have a look at their new car, the Kia Stonic, and specifically how it worked in terms of a hospital dash and as a car for a new family, I thought it would be well worth a look. So I headed down to GWR Kia to find out. 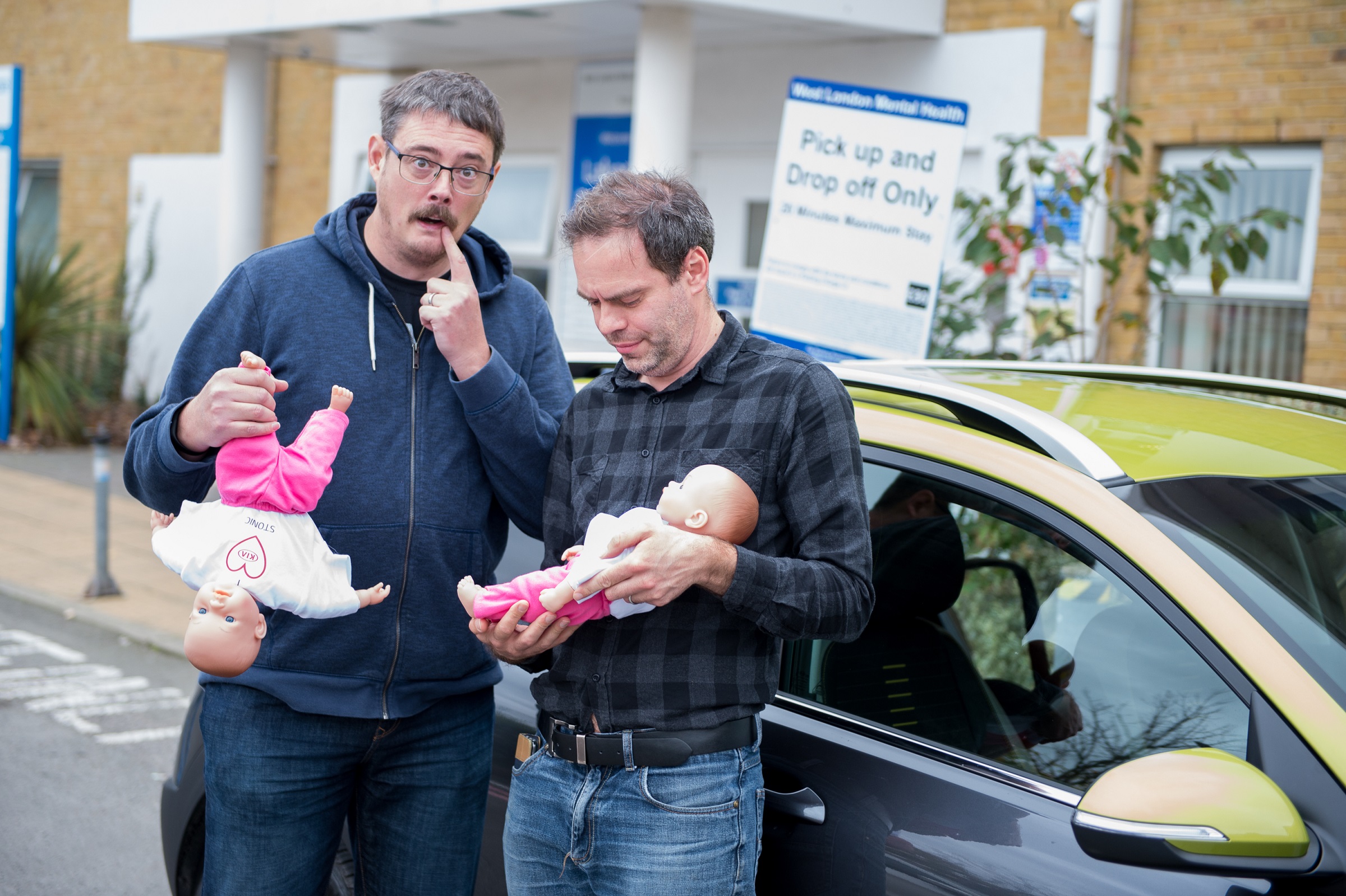 I tried to go into the event with an open mind but I didn’t know very much about Kia, so I set about educating myself on the way there (I wasn’t driving!). Kia are South Korean. This apparently makes some look down their noses because all the best cars come from Germany.

This is odd because Samsung are also South Korean, and as cars get more and more packed with gizmos and computers, I would have thought hailing from the technological capital of the world (sorry Japan, you’ve dropped to second) would have been seen as a bonus. 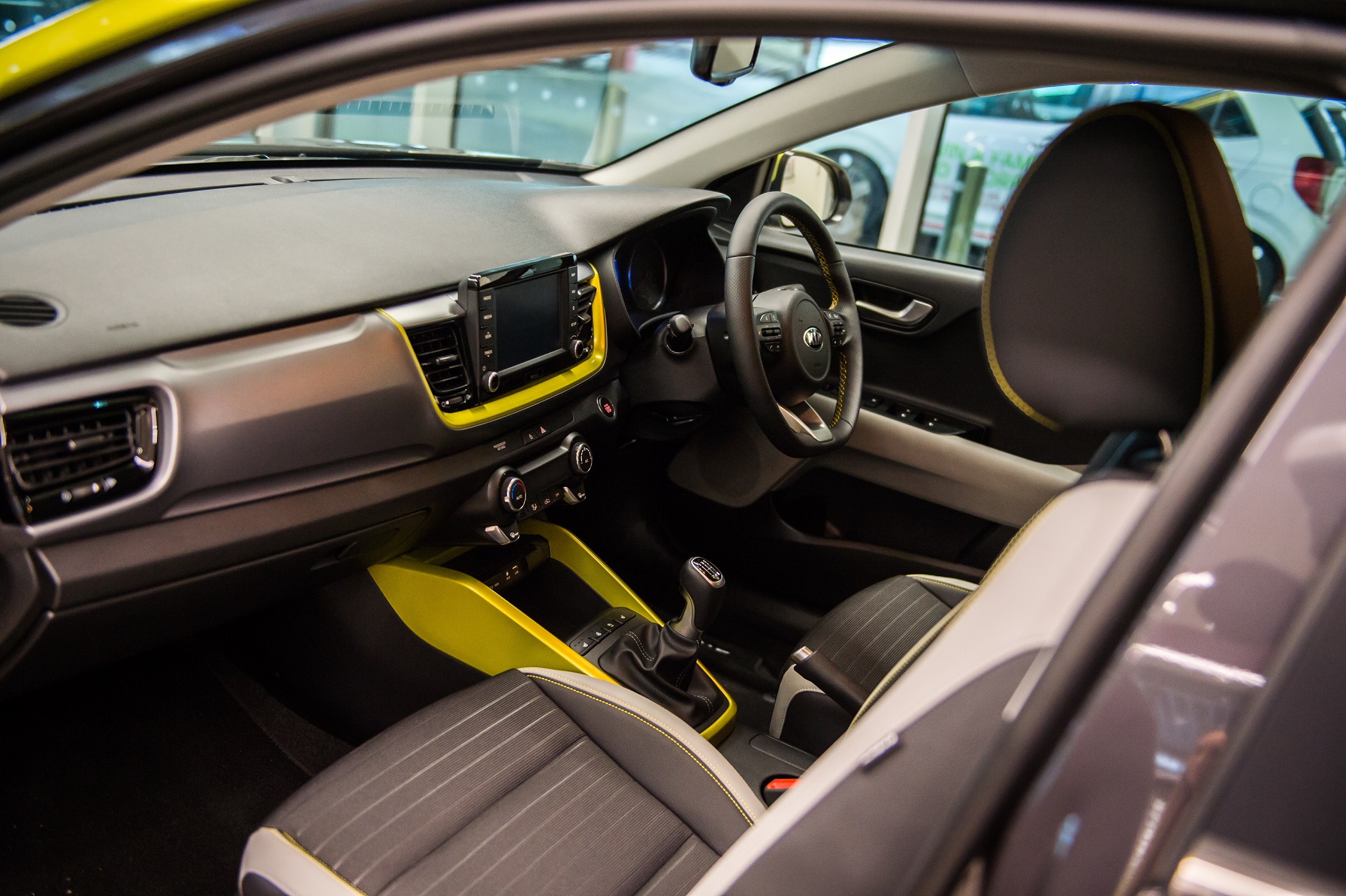 I was trying to reconcile my preconceptions an hour later while familiarising myself with a Stonic, packed with features like key-less ignition, rain sensing wipers, reversing cameras and blind-spot sensors. I didn’t get round to using the Android Play stereo function as I was worried about being judged on my musical choices. But enough of this, lets take a step back for a moment.

Babies are small. Until you have a baby you think you’ve experienced being tired, being skint, and uncomfortable. Then you get a baby and find out, like I did, owning a hot hatch (a bright yellow three door in my case), means you risk slipping a disc every time you try and manoeuvre a baby car seat in past a sliding door. And that’s no fun when you’re tired, skint and generally uncomfortable.

Personally I can’t see the temptation to go from hot hatch owning funster to middle aged Volvo driving mediocrity with nothing in between. I’m still a person as well as a parent. And this is where something like the Kia Stonic comes in.

The Stonic is a fun car. I got to drive it through the Brentford traffic from the showroom to the nearby hospital, in simulation of a hospital run at rush hour time. I’m a big lad, 6ft 4 in fact, but it was easy to get comfortable and there was still room for the photographer to sit behind me. All I had to do was push the seat back, and put the wheel up a bit and I was comfortable. I can’t get comfortable in something as big as a Nissan X-Trail, which shows how well thought out the inside of the Stonic is.

A family car like the Stonic is never going to set the world on fire in terms of performance, and the 1.6 diesel I drove had 100BHP, which sounds in danger of being underpowered but thanks to the low end torque, was perfectly adequate in traffic, whether it was pulling away at lights or swerving at a roundabout, I never felt like I didn’t have enough grunt. Kia reckon that the petrol models with account for around 60% of sales, and the 1 litre turbo charged three cylinder will be the most popular of the two petrol engines. This is good as it’s got a 0-60 of less than ten seconds, so whilst it obviously won’t corner as well as a hot hatch, you don’t have disastrous straight line acceleration.

I must briefly mention the stop start too- it’s at least as good as that on my Honda Civic and miles ahead of the VW Tiguan I’ve been in recently. Very smooth, it’s something I’d actually probably leave on because it won’t irritate me. 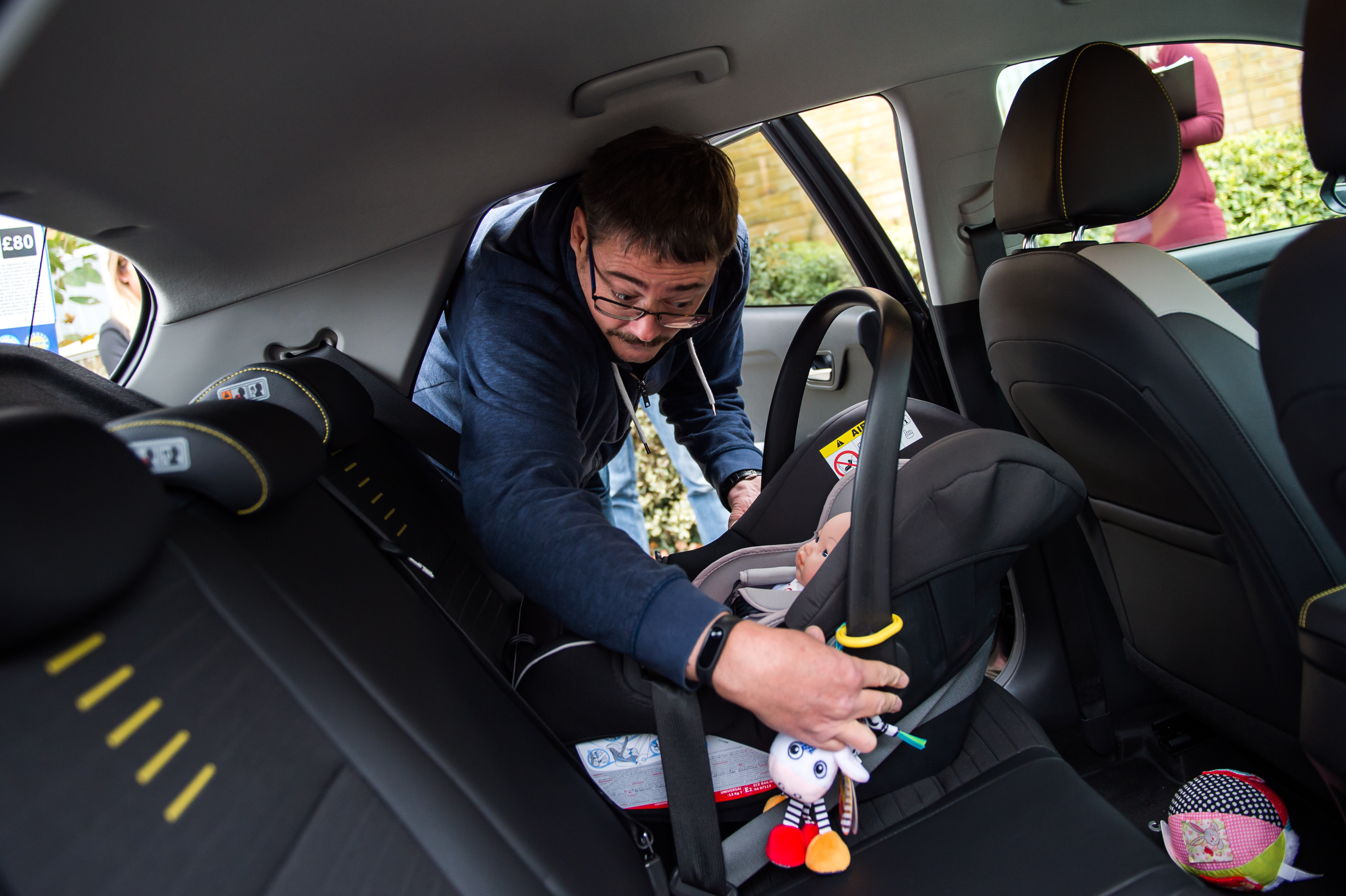 Fitting my “baby” into the car in her seat was a piece of cake too as the Stonic has plenty of headroom. I can remember leaving the hospital with our first baby ten years ago, overwhelmed at how wiggly and strong something that had only popped out a few hours ago actually was. I’d been up 36 hours straight, and my wife (obviously) longer, so it was a a bit surreal as I struggled to get our delicate little son into a car that had seemed very familiar two days ago but now seemed completely alien. If I’d had such a high roofline like the Stonic has, I probably wouldn’t have clobbered my head quite so much. The spacious cabin does come at a slight cost; the boot is about 350 litres, which is certainly large enough for a Stokke or Bugaboo but is a bit smaller than I’m used to (the Civic has a class leading 470 litres, which is more than the Golf or any other car in that class). Still, it’s large enough to get another parent blogger in: 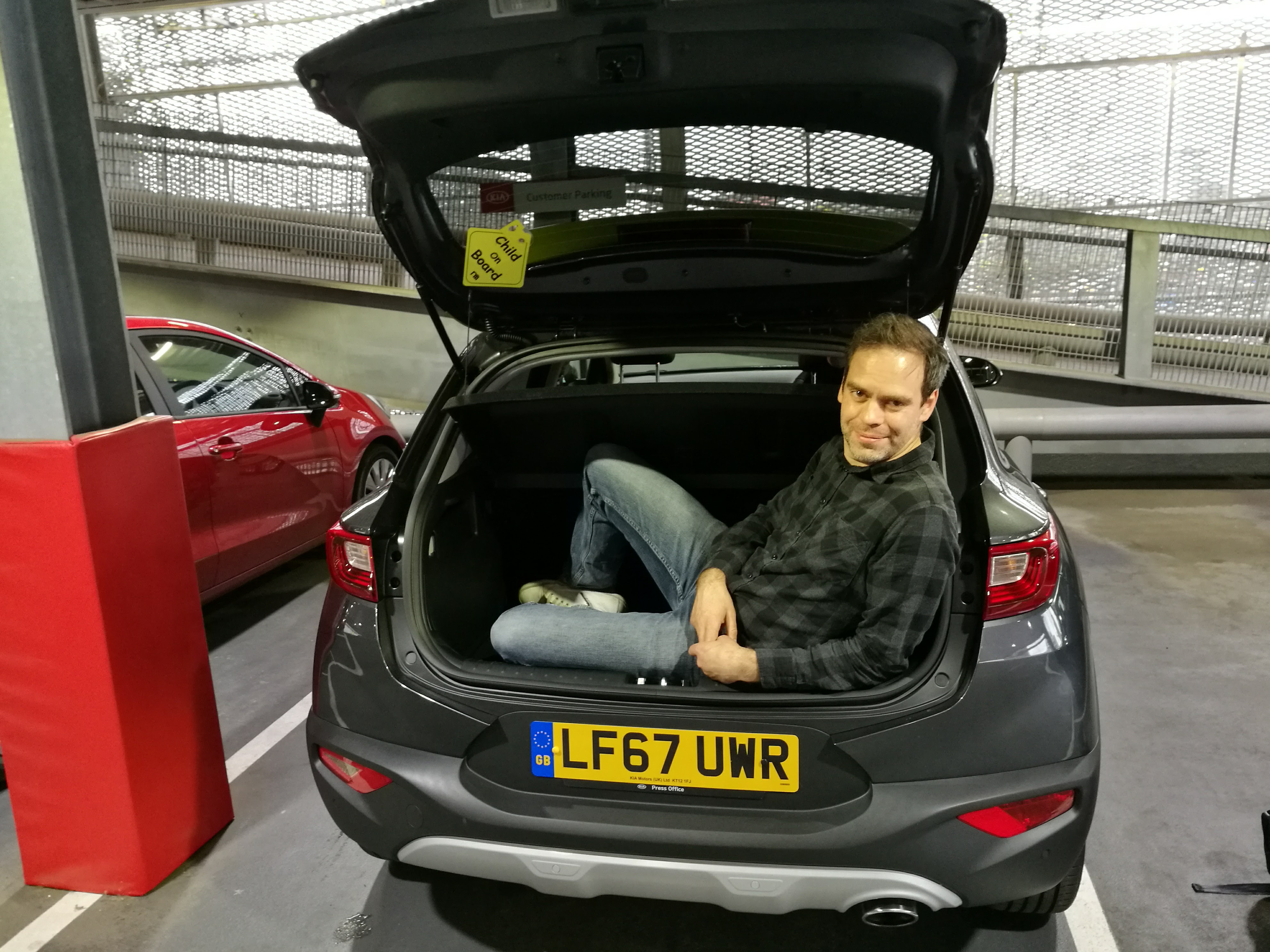 The basic model starts at £16K, going up to £20,500 for the top end model with all the bells and whistles, including heated seats. The amount of extras you get for your four grand are pretty astonishing; and I think it’s pretty easy to spend £16K specc’ing up a basic BMW or Merc, so you really can’t fault the value on offer.

And as the owner of three small children, this really is key. Babies will be sick in the car, their nappies will leak in the car, and when the kids are older, they’ll eat messily in the car, and no doubt get into it covered head to foot in mud. From an experienced parent perspective, the Stonic is well put together. There are very few nooks and crannies that look like they’ll be hard to clean and it all seems accessible to both a vacuum cleaner and (God forbid) a carpet shampooer when the need arises. With the Kia 7 year warranty, you can be safe in the knowledge that mechanically it will be reliable too. 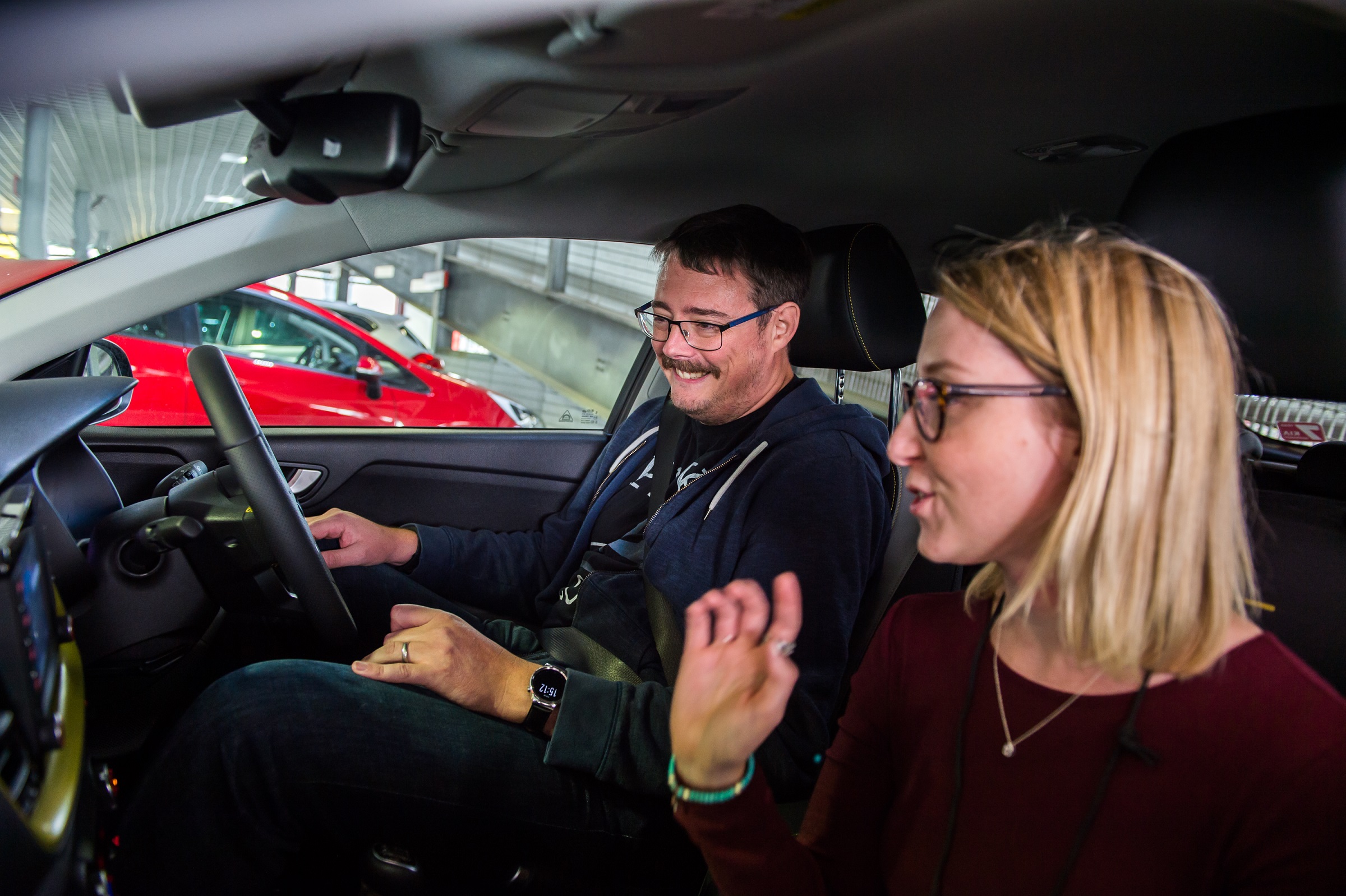 I’ve been fortunate to drive a lot of great cars through blogging. I’ve drive Ferrari 458s in Modena, racing spec’d Jags at Prodrive’s test track, and sporty Volvos at the Top Gear race track. They were great to drive but they didn’t surprise me like the Kia Stonic did. The average price today of a car on the forecourt is £28,000 but the top spec’d Kia Stonic is so much cheaper than that, you can actually afford to take a full years maternity leave with the difference. Kia have managed to give you a lot of car but a lot of car that looks pretty funky too, which will definitely help new parents keep their own identity.

Daddy Day Car All-New Kia Stonic test drives test drives will be taking place at selected Kia dealerships in November. While places are limited, customers wishing to take part can contact kiadealer@kazoo.co.uk to enquire about their nearest dealership and book a slot. For more information on the All-New Kia Stonic please visit www.kia.co.uk/stonic.