I’m 42 now and this year has seen one of the best things ever happen. I’m of course talking in the sense of literature, rather than general life, but literature has been and will continue to be an integral part of my life, and that’s something I can be proud of.

Back in 1989 I picked up a dense hardback book called “The Dragonbone Chair” by a chap called Tad Williams. It was high fantasy and wasn’t my first foray into that genre but it was by far and away the best thing I had read at the time.

When I was 7, a few years earlier, I tried to read the Hobbit after playing the adventure game on our home computer. It seemed very twee but I persevered. The Lord of the Rings wasn’t for me at that point though, it seemed too dusty and old fashioned, and it was a couple of years later in 1984 when I finally took the plunge and bought a proper fantasy novel as a direct result of finding a bundle of screwed up notes on the pavement.

£30 in 1984 was, to a nine year old, more of a fortune than you could possibly comprehend. The Beano was 12p, and a Mars Bar less than that. I trundled off to our local bookshop and purchased a copy of Dragons of Autumn Twilight, one of the better Dragonlance Chronicles books. Since this was ten years before the Net Book Agreement was dissolved, I had to pay the publisher set price on the back of the book, which was £2.25 (or 18 copies of the Beano!).

It was a struggle, considering my reading at that time was mostly Famous Five and the Three Investigators, which was I suppose fairly normal for a nine year old but I persevered and my love of fantasy literature started there. By the time I picked up the Dragonbone Chair in 1989 at the age of 14, I’d read everything David (and Leigh) Eddings had written- little more than children’s books themselves-, an awful lot more Dragonlance, a handful of Raymond Feist (back when he had only written a handful of books) and, rather oddly for someone of such relatively tender years, Stephen Donaldson’s entire fantasy catalogue. I wasn’t introduced to his work via the Thomas Covenant novels, rather the library had a hardback of the first book in his Mordant’s Need series. Once that had been picked off, I went back and read everything else he had written. Just don’t get my started on the Last Chronicles, they were unnecessary. There were plenty of others in there, memorable and not no memorable, ranging from the Chronicles of the Cheysuli through to Discworld.

In the years since To Green Angel Tower, the third part of the trilogy Memory, Sorrow, and Thorn, that began with The Dragon Bone Chair, a lot has happened in terms of fantasy literature. GRRM has written (some of) A Song of Ice & Fire that’s been turned into A Game of Thrones on the TV, Robin Hobb has written about 200 novels, most of which are great, The Malazan Book of the Fallen has started and finished, and while there was a little overlap between Memory, Sorrow and Thorn and Robert Jordan’s The Wheel of Time, it wasn’t much. And they’re not really comparable. Really, they’re not.

More recently we’ve had the KingKiller Chronicles, The Gentleman Bastards and other authors who have subverted the genre in ways that JK Rowling could only begin to dream of but being a creature of habit, in amongst the new stuff, I still find time every few years for a re-read of my old favourites, Memory Sorrow & Thorn, and the first two Chronicles of Thomas Covenant. 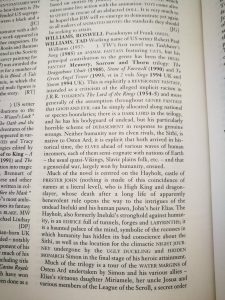 I was taken by the entry in an old Fantasy Encyclopedia on The Dragonbone Chair. It was a proper door stop of a book that I picked up as a “joining offer” from a fantasy book club but it reviewed well and would have cost about £50 to buy if it hadn’t been one of those 1p introductory offers. The entry described the trilogy as “revisionist fantasy” that set about criticising the implicit racism in Lord of the Rings and more generally the assumption in fantasy that good and evil can be assigned via national or species boundaries. That it does this, as well as playing on the tropes of peasant boy to monarch, the chaste & virtuous princess, whilst still being incredibly well written is a testimony to the author Tad Williams skill.

Williams wrote The Dragonbone Chair when he was in his late 20s; it was published when he was 31 years old and I remember vividly thinking, “great! He’s so young, we’re going to get 30 years more of awesomeness out of him, I am so excited!”

While a 42 year old me can understand why he wanted to do other things after concluding his trilogy with what was one of the longest single volume books published (520,000 words in hardback, which I still have), I was 18 when the trilogy finished and disgruntled that his next series was a virtual reality five book series that I enjoyed but didn’t love. Of all the work of his that I read, subsequently, I loved The War of Flowers the most but like a lot of his fans, longed for a return to the World of Ostern Ard. Williams even suggested on more than one occasion we may get a collection of stories set in the world, rather than a full sequel and I would have happily taken that.

A couple of years ago Williams, out of the blue as far as I could see, announced to much rejoicing he was returning to Ostern Ard with another series featuring the same characters. Eschewing the typical approach of picking up straight after the events of To Green Angel Tower, the new trilogy proper (there is a novella between the two series that was released earlier this year) is set 34 years after the end of Memory Sorrow & Thorn. The number 34 is very important as you’ll see when I finally get to the point.

As any fan of Williams would hope, the new series is complex, not obvious and somehow has the characterisation down to a tee. Picking up characters, people even, again after such a long lay off- I was 18 when I read the last book of the original series, 42 now- and getting their behaviour, speech and reactions so perfect is nothing short of astonishing, especially as the characters have grown and changed with the passage of time and have been shaped by the lives they have lived. Time in Ostern Ard has passed more rapidly than for us though; 24 years have passed for me while my friends, Simon, Miri, Binabik and Tiamak are 34 years older.

When I got my copies of the Witchwood Crown (Audible and hardback. And maybe Kindle too, it is a big book to take around with you), I didn’t start reading it immediately. I wanted to savour it and was also finishing off a couple of other books, having done my reread of the first trilogy before Christmas in preparation. I’m still reading it and in no particularly hurry to finish it. The longer I take, the less time I’ll have to wait for the next book.

I did however spot an error. Not a glaring error but an error none the less. Much like the original version of the Dragonbone Chair incorrectly stated at the beginning the year was 1164 when the events of the book make it 1163, I found a slight chronological disparity in terms of something a character said.

At one point Simon has a bad dream, dreaming of his long dead son and his friend Leleth who died in To Green Angel Tower. His wife chastises him, saying:

As a reader of more fantasy than most would be happy to admit, that didn’t sit right with me as a score is twenty, so two score and ten would be two lots of twenty and a ten added on for good measure. Or fifty. But we know she died 34 years ago, so why would Miri say 50?

It wasn’t and isn’t a major thing but my brain wouldn’t let it go, so the other night I tweeted the author (well, I think his wife runs his twitter account but anyway) and pointed it out. Cue a discussion with the chap who does the proof reading and continuity work for the novels. He thought a score was 12, which would make perfect sense if it did but it doesn’t. So they’re going to change the book. Presumably the ebook will be really easy to change and I suppose that anything so far unprinted can/will be altered but as a result of my casual comments, one of the fictional characters I’ve known for the many years is actually going to say something different. That’s pretty mind blowing for the 42 year old me, let alone the 18 year old me that first read about Simon and Miriamele.