My last post was exactly one word short of 1,500 and it was about books. Books, and reading in general are a bone of contention in our house. The two older kids are reluctant readers, often preferring to do nothing and complain about being bored rather than simply reading a book.

While the surrounding distractions they have are undoubtedly greater than those or wifey had when we were growing up (we’re both avid readers), I think there is a danger that we look back on our youth with rose coloured spectacles and automatically condemn the amount of television and videogames available to us now as a reason why kids often don’t like reading as much.

All our kids love Minecraft, and various other video games but it would be facile to blame the availability of these when in my youth home computers and then games consoles were exceptionally popular. And while kids TV was limited to two channels during the week, running from around 3:15 to half past five every day, it was there, and a distraction.

I think the fact the boy refuses to read in bed in case he gets too hot is probably the bigger factor, Fifi certainly does.

Which brings us on to Ned, our former reluctant reader. Until fairly recently he would flee the room rather than attempt to read a book aloud to us. His reading book journal for school is full of comments to that point from us but there is a notable difference this term. Ned might be half feral at times, no doubt the result of being the youngest of three and being convinced he should have the same rights and priveledges as his ten year old brother while being only half the age, but he is the child who loves having books read to him the most. The only threat he properly takes seriously is the threat to not read him a bed time story. 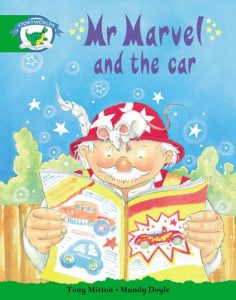 Now that Ned is a little bit better equipped with the tools to read, he’s happy to give it a shot. I had an amusing parenting fail with him yesterday, when I sat down to read Mr Marvel and the Car with him. The first page looked excessively in advance of what he has read before but we struggled through. Then it got really easy. Odd, I thought, and looked at the inside front cover, finding instructions there telling me to read that page aloud myself to set the scene for the easier stuff my five year old would be reading.

Still, I managed to get a five year old to read something well past his level, which was nice. I’m now considering* writing his siblings off as a lost cause with reading, and focusing entirely on him.