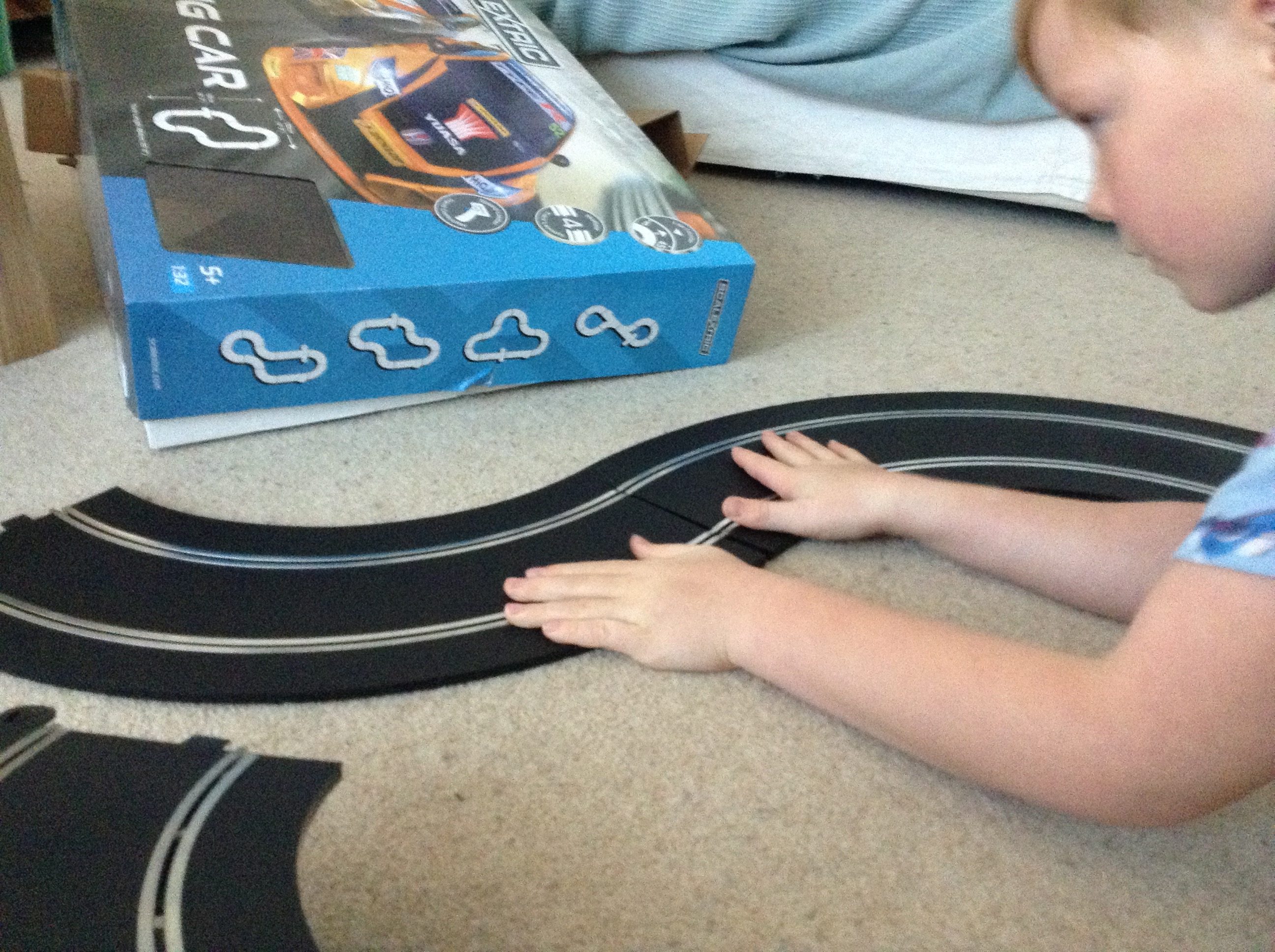 When I was offered a Scalextric set to put in front of the kids, my first thought was wow! I used to have a lot of Scalextric back in the 1980s; some of it inherited from my cousins from the 60s. We had some of the old cigar shaped F1 cars from the 60s but my favourite was probably the Ford Mirage we were given.

In the intervening 30 odd years Scalextric has changed in some ways and not in others. The tracks are still a bit fiddly to get together but thankfully the connections are much better, so when we used the Scalextric BTCC Touring Car Battle Racing Set there wasn’t a repeat of my dad at my age cursing softly under his breath as he ran a bit of wire wool over the track to ensure it completed a circuit. The pick ups that make contact either side of the slot are exactly as I remember them from my youth but thankfully they are much easier to replace.

I found one set needed to be replaced the day after we got the Scalextric set, which surprised me but in part reflected the way the kids played with it. It was an uphill struggle to teach the children not to move the cars backwards whilst trying to slot them into the, erm, slot. This caused a bit of degradation in the pick ups and meant I had to replace them sooner than I had expected to. 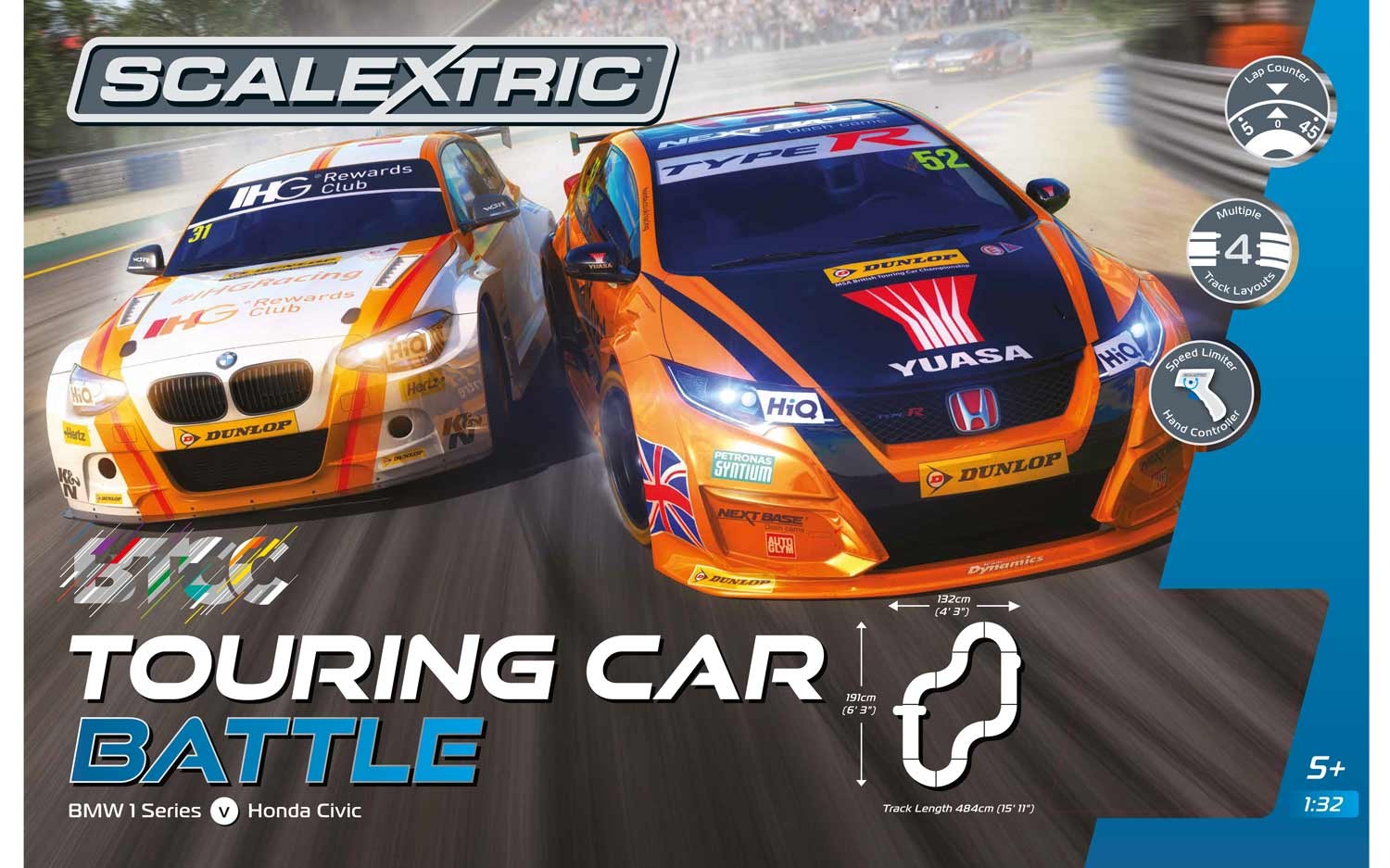 We liked the built in lap counter, which was much better than the overhead one my brother had when we were kids, and there was enough track to make several different circuits, the fairest of which was an elongated figure of 8- is you don’t cross over the cars at some point, the racer on the inside can’t go as fast round corners and has a bit of a disadvantage.

If I had to criticise anything, it would likely be the length of the cables- the PSU cable is about a metre too short, which means if you’re looking to set it up without using an adaptor strip, part of the track needs to be right next to a wall socket, and the controllers could do with an extra 50cm of cable each too.

A quick look on Amazon shows additional cars range from £20-£40, with track expansion packs ranging from £16- £25. That’s not bad at all, although I think the cars could be a bit cheaper as the more expensive ones are the same price as Anki Overdrive cars, which pack an awful lot more tech into the car than Scalextric do. I found the rear axle had a tendency to come unclipped after crashes too, which given the age group it’s aimed at are going to be fairly common.

So I’ve mentioned Anki Overdrive, which I suppose is the elephant in the room when it comes to talking about Scalextric. Although this set is defiantly analogue with no computerised bits and bobs, Scalextric do an ARC system with app controlled cars, which is a sort of half way house to fully app driven, slotless system that Anki do. Price wise, you can pick up an Anki starter set with two cars and an equivalent amount of track for £135 at the moment, against the RRP of £99.99/ in store price of £90 for the Scalextric BTCC Touring Car Battle Racing Set.

Surprisingly though I think the Scalextric set is more accessible, and there is little between the two in terms of fun. On paper, the Scalextric should be in real trouble; it’s yesterdays tech and full of compromises against Anki but in practice it’s much easier to have fun with. Slot racing cars don’t need to be charged, a 350meg app doesn’t constantly need updating on three or four tablets (and it’s finally on the Amazon app store!), there isn’t a convoluted menu system to go through before you can actually start racing, it just works.

If Scalextric up the quality of the cars or drop the price of extra cars, this set would be brilliant, as it stands it’s just very good.