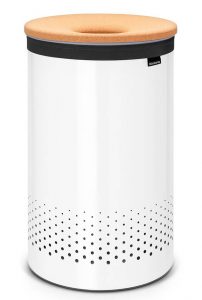 This is a Brabantia laundry basket. It is not an Amazon Echo

I’ve been banned from operating the washing machine. I feel that I should tell you this to some early period Led Zep tune, with plentiful mouth organ and Robert Plant wailing plaintively over a cut back guitar and drum backing. You know, “Mean ole’ laundry, taught me to weep and wail.” It basically had rather a lot to do with i) the inclusion of some coloured items in a white(ish) wash and ii) the tumble drying of some stuff that came out looking rather a good fit for Action Man or Barbie. In both instances the garments that, in my defence were obviously defective (I mean, colour shouldn’t run and why on earth would two hours in a tumble dryer shrink a woolly cardigan?).

So I actually have the fun part of doing laundry taken away from me because I’m now banned from using the washing machine and the tumble dryer and I do get a strange satisfaction from cleaning out the fluff filter in our dryer. Piling the stuff the kids leave laying on their floor into the laundry basket and sorting out laundered clothes and returning them to their rightful owners is all I’m allowed to do now. And I’m fairly convinced that at least one of the kids puts half their clothes right back into the laundry basket because it’s less hard work than actually putting them away properly. 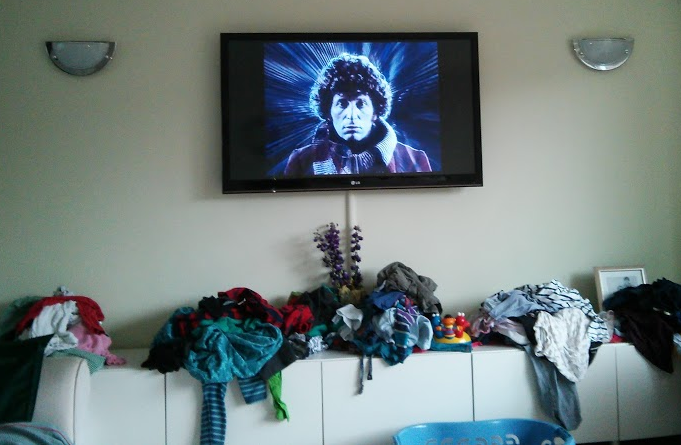 Sometimes Tom Baker has to help me with the laundry. There’s enough to fill his TARDIS

There is nothing more depressing than trying to pair up school socks when you have three children at school with slightly different sized feet. I’m convinced we’ve managed to find perhaps 30 different styles of school socks, and obtain one sock in each style and size because it is impossible to ever match a pair. It’s also getting confusing now with my wife’s and daughters tops. My daughter (8) wears 12 year old’s clothes but my wife is a size 12, so I’m forever getting their stuff muddled up. Being huge myself- I’m 6ft 4- it’s impossible to correctly size ascertain other people’s clothing as it all looks absolutely tiny.

This time of year the laundry inevitably builds up towards the weekend as we don’t have enough time to run a wash and dry it in the evenings after being at work. And because my wife is obsessed about the tumble dryer burning the house down as soon as nobody is looking at it (as if it knows when we’re upstairs or something), it invariably means a day of the weekend is spent with the children lolling around watching TV or playing video games while I sort out all their laundry. At least I have some vintage Doctor Who to keep me entertained while I’m at it though!