I’ve always loved (most of) the Star Wars movies. The prequel trilogy don’t count but the new films are pretty good and our kids seem to agree, they’re all big Star Wars fans too.

EA have the video game rights tied up and the visuals that a big budget studio can create are stunning, as this mash up of the speeder bike chase from Return of the Jedi with the actual game shows:

Although the movies have strayed into 12A terrotry with The Last Jedi, overall (running from Phantom Menace to Last Jedi), the ratings run like this: U, PG, 12, U, U, U, 12, 12A, which shows that the films are pretty family friendly. I love how the original trilogy are all U certificate, despite the arm severing, smoking skeletons, hands being chopped of and so on. Kids in the 80’s could deal with that sort of thing.

Star Wars Battlefront 1 & 2 are both PEGI 16. PEGI is the Pan-European Game Information age rating system, it aims to give consistent ratings to video games much like the BBFC does for films. Rating a game significantly higher than any of the movies it’s tied in to is an odd decision. Especially when the game doesn’t contain any blood or gore. You shoot people with blasters and use lightsabres.

It’s a difficult situation to explain to kids that on the face of it they can’t play a game tied in to the films they love, especially when a very similar game in Overwatch is rated PEGI 12. 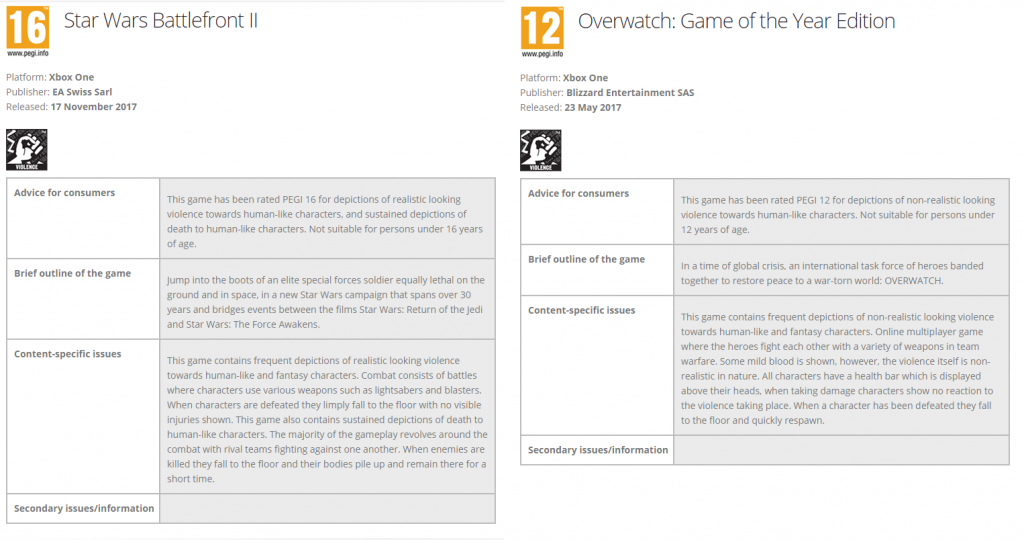 As you can see above, Overwatch even has some blood on display when you shoot people. I was confused by the “realistic” weapon comments about Star Wars when compared to the “non- realistic” weapon line about Overwatch so queried it via twitter. The response is interesting:

Despite there being no blood, and in both games characters that die “respawning” after a few seconds (unless you’re playing a game mode where you only get one life per game), the characters physical response to being shot with a laser blaster in Star Wars warrants a higher rating than Overwatch. Why? Perhaps it’s because of the persistence of the bodies. In Star Wars Battlefront when you shoot someone the body stays, in Overwatch it doesn’t, after a few seconds it disappears. It’s either an asthetic choice, or a processing resource decision (mapping all the dead players characters and rendering them requires computational resource that the developers of Overwatch might have decided is better used elsewhere).

There are of course many more issues to consider on whether a particular title is suitable for your kids to play, I particularly focus on what the online community is like if the game is online multiplayer. Do the developers proactively deal with bullying or trolling, what sort of age range play the game, what is the in-game communication like? That sort of thing is important.

With Star Wars Battlefront 2 being heavily discounted at the moment and the original available for very little, and the fact that both games support split screen local multiplayer, it is very tempting to play with my older kids, despite the PEGI rating. What do you think?!