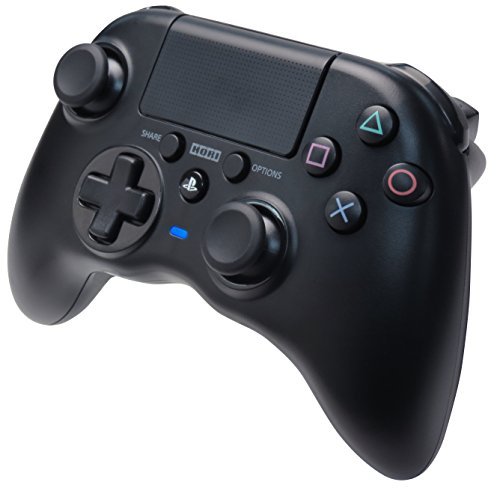 I love my PS4. I also love my Xbox One. I don’t really love the Dual Shock 4 controller though, the thumb sticks are in the wrong place for me and the overall ergonomics of the pad sometimes suggest to me I’m not doing as well as I might. I have no such issue with the Xbox One controller (any iteration of it), so when I saw that Hori had an officially licensed controller due out with what they helpfully refer to as “Offset Analogue Stick Layout”, I was excited.

Offset Analogue Stick Layout is another way of saying, hey! We’ve copied the thing that makes the Xbox One controller better!

I was interested to see how much of a difference the offset controls on the Hori ONYX Bluetooth Wireless Controller made to my game so I fired up Ultratron, my favourite twinstick shooter.

I have to admit I found it easier weaving in and out of the bullets on assault levels with the Hori Onyx. The controller feels solidly built and the wireless aspect puts it head and shoulders above the other offset controllers for PS4 which are all cabled. I’m not a huge fan of the textured back but overall the controller feels sturdily constructed. One slight quirk is it doesn’t sync with your PS4 over a USB cable (there isn’t one supplied anyway), you have to use your existing DS4 controller to add it via the Bluetooth device menu. It’s not a biggie really.

Weight wise the Hori sits much closer to the 200g weight of the Dualshock 4 than the Xbox One controller but it feels pretty sturdy from a few hours play. I’m a fan, and happy that I parted with my own cash for it. The Hori will be my private controller and the kids can keep their hands off it!

The Hori Onyx Wireless Controller is out now and available for £44.99 from Amazon