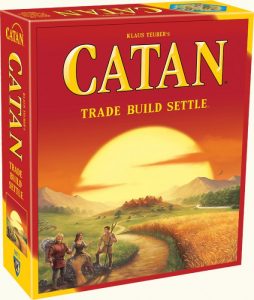 I’m late with this review and the reason behind it is a bit silly. Catan just sort of looks intimidating. As someone who never really board gamed past the classics like Cluedo and Monopoly, even I’d heard of Catan because it’s such a big deal. From what I’d heard it’s a game that’s best with 4 players and can take around an hour and a half to play. That sounded a bit intimidating but I wish I’d not seen it as that because once we cracked it open with some chums, the game time just flowed by and we were all sad it was over; pulling out our phones to try and work out when we could schedule another game (pro tip- you can fit a game in during the average run time of a kids movie, even allowing for the interruptions down to complaints like “he looked at me funny”, or “he’s sitting on my private sofa”).

Catan comes with one of the best instructions booklets I’ve seen. Everything is illustrated with pictures, so there’s none of the usual Alex process of struggling to pick out the right meaning (I’m terrible following instructions- to me if a car says it needs servicing at either 10,000 miles or 12 months, I’d have it serviced when it hit 10,000 miles at 14 months).

The Catan board is a bit of a novelty, made up of large hexagons. Or is that hexagonal pieces? I’m going to stick with hexagons as it’s easier to type. Each hexagon is a different type of land, and every time you play they go together in a unique order, which gives the game a lot of variety. Each hexagon has different attributes assigned by a number between one and twelve, omitting seven, which is kept apart for something more sinister! We used the beginners set up, which sees each of the 19 hexagons (aside from the desert) given a number. Some numbers appear more than once, which comes into play when rolling the dice later in the game (it’s all to do with the probability of rolling certain numbers you see).

The Catan board fits together nicely as you can see from the game we played the other night: 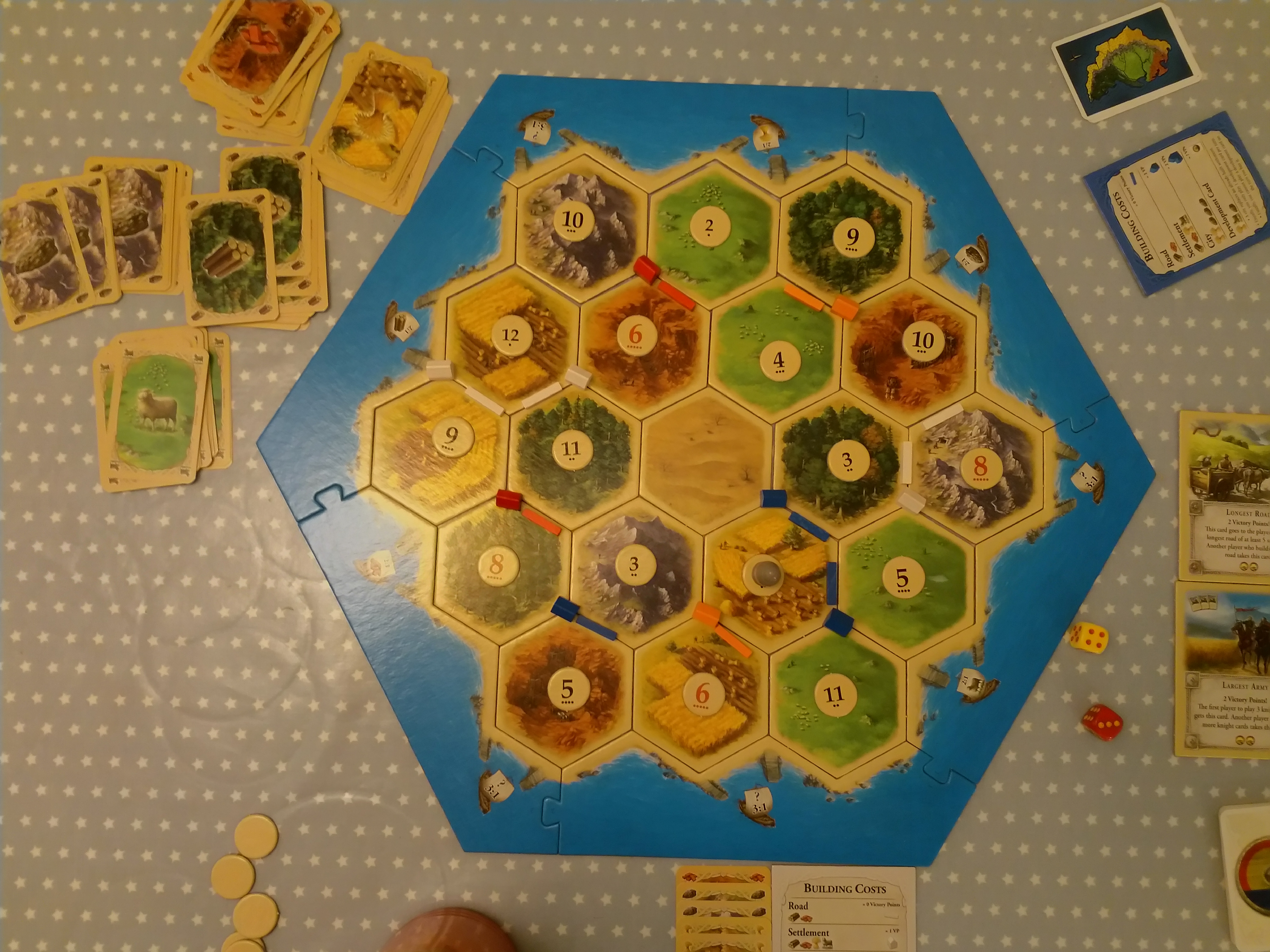 Thankfully the blue sea border slots together nicely and makes it easy to put together, as well as being stable on a table.

Initially I felt a bit overwhelmed by the set up of Catan; there is a lot to do and think about, hexagons, numbers, villages, roads, resources and the Robber who starts off in the centre and moves whenever someone rolls a 7. But perhaps surprisingly, Catan is really easy to play for beginners. Each turn involves a roll of two dice, anyone who has a village (or later a city) adjacent to a hexagon with that number in it gets a resource card with the material shown in the hexagon. Using the above as an example, if I’d rolled a twelve, white (me) would get two crop resource cards as I have two villages next to the hexagon with a 12 in it. If other players have settlements around a rolled number, they also get resource cards, regardless of whether they rolled the dice or not.

The game is about resource management basically, trading cards for roads and villages and cities, you can also trade cards with other players when it’s your go. Being captain obstinate, nobody would trade with me as I was winning but I didn’t let that stop me! 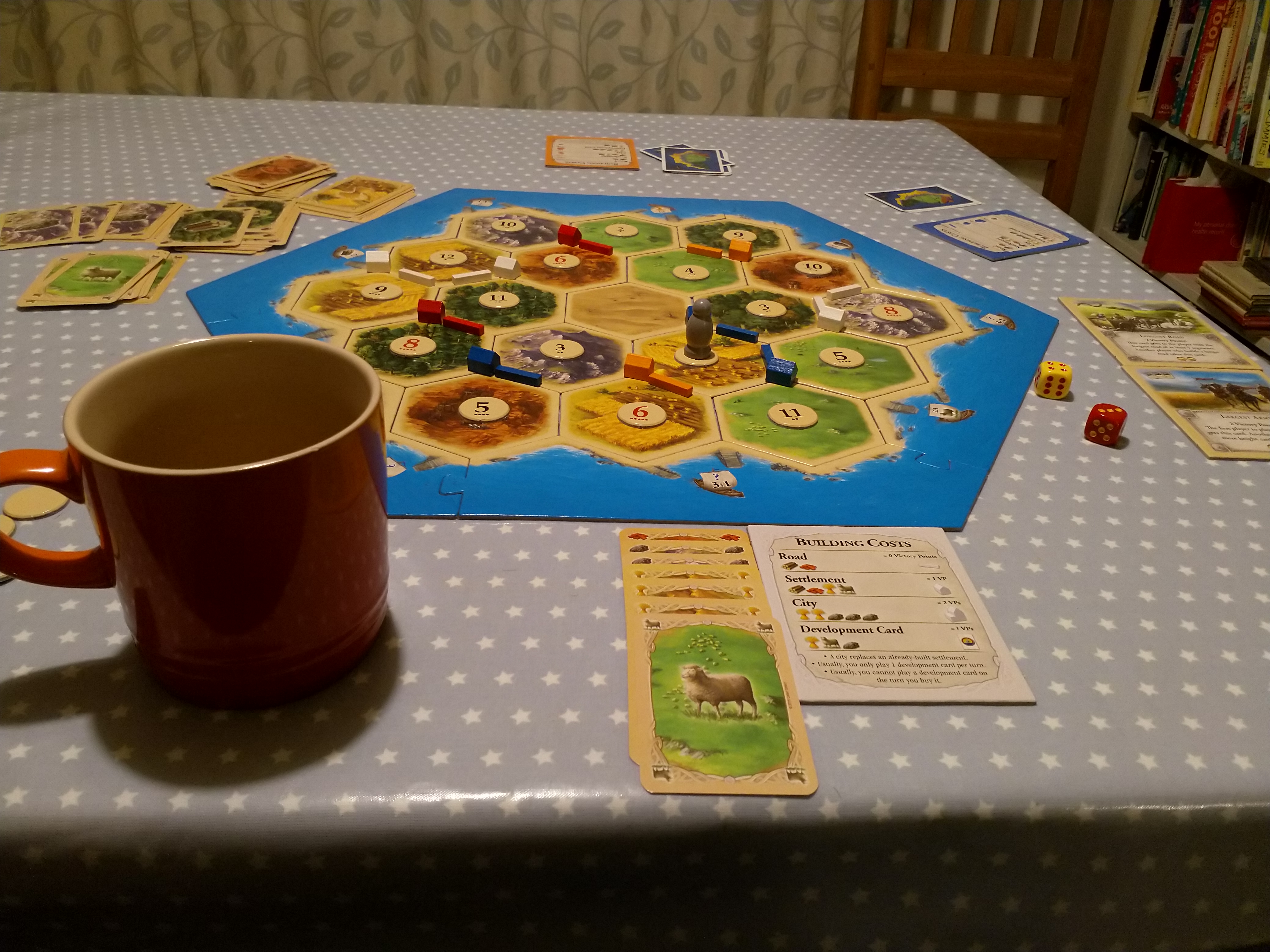 The aim of Catan is to collect 10 valour points (each settlement type you can build gets you a certain number, as does having the longest road and the most knights). This effectively puts a timer on a game that is pretty open ended but it’s still not a quick game to play. Our first couple of outings with only three players still took almost and hour and a half (with constant tea rounds contributing to the running time no doubt).

Catan is easily the best game that I’ve discovered on my journey with the Board Game Club. It’s simple to set up, despite all the components, and allows for great interaction between the players. The ability to randomly place the hexagons makes for an almost unlimited landscape and the player interaction via bartering makes for an interesting twist too. This is a game that works as well over a couple of bottles of wine as it does several rounds of tea. It’s really great fun!